<< Back to overview
Solid features, neutral sound and affordable price make these USB audio interfaces a good choice for home studio and on the go.

A bout two decades ago, M-Audio launched the Duo, one of the first small and affordable USB audio interfaces for the home studio. Now, the great-grandchildren M-Track Duo and Solo are on our test desktop and want to establish themselves against considerably larger competition than ever before. 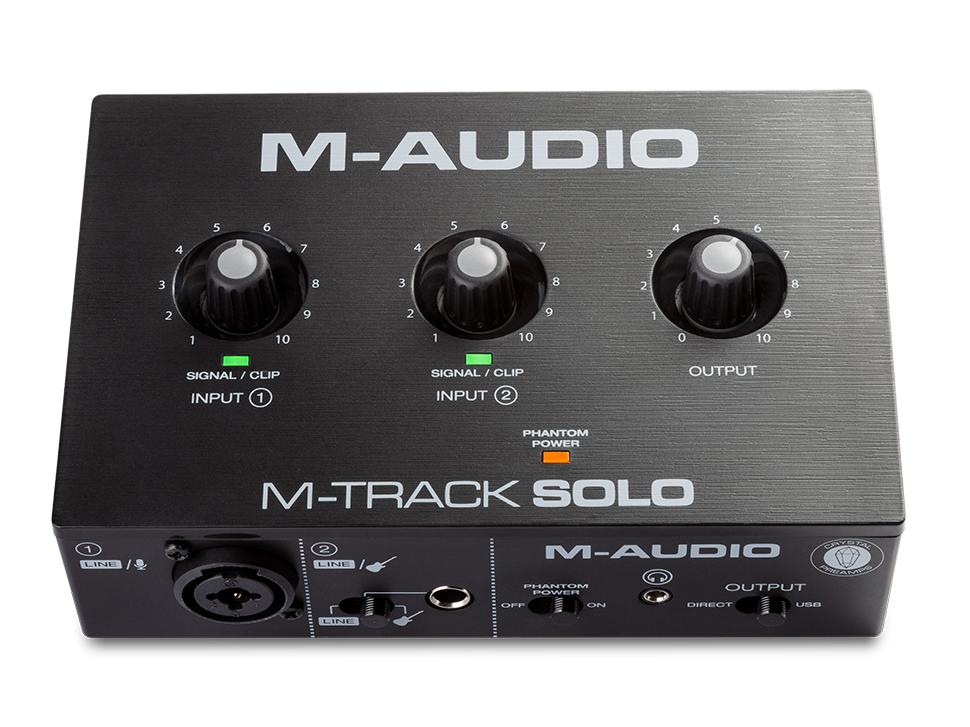 Both interfaces are housed in compact and relatively light (0.3 kg) plastic cases. The three and four level controls respectively offer a pleasant rotary resistance. They are recessed and, therefore, protected from damage. This makes sense, since these controls are also made of plastic and are not attached to the case. All in all, the two interfaces don‘t feel of outstanding quality; other manufacturers offer more; however, there is nothing to seriously complain about, the M-Tracks seem sufficiently robust for home use with their plastic composite, stand solidly on the desktop and will also survive transport in a gig bag. For live gigs, however, we would go for more robust solutions with metal housings.

Both interfaces have two audio inputs; however, the Duo is more flexible with its second input. It has two XLR/jack combo jacks, each of which can accept microphone, instrument or line signal. M-Track Solo has just one combo jack, which is only suitable for microphone or line signal. The second input is designed as a jack-only socket for line or instrument signal. Phantom power for condenser microphones can be activated on both interfaces. The Duo interface is also better equipped in terms of monitoring. Both interfaces have a stereo and a headphone output. With the Duo, all three outputs are somewhat more professionally designed with 6.3 mm jacks than with the Solo, which has a pair of RCAs and a 3.5 mm jack. The Duo‘s stereo output and headphone outputs volumes can be adjusted separately, while the Solo has only one common control. The Duo also offers another option for direct monitoring.

Both interfaces connect to the computer via USB 2.0, and the resolution of 16 bit/48 kHz is rather moderate. Even in the inexpensive entry-level range, a resolution of at least 24 bits is already common so that additional headroom can be used for leveling. The USB cable also takes care of the power supply. On Mac computers the interface is automatically recognized, under Windows it is recommended that you install the driver package from the M-Audio homepage. It is also worth taking a look at the generous software package, which includes various instrument and effect plug-ins from ProTools Lite and Avid to the Special Edition of MPC Beats.

Both M-Tracks impressed us with a sufficiently transparent and neutral sound in our practical tests. In this respect, a lot has happened in the last few years, especially in the affordable price range. The headphone output has sufficient volume reserves for normal applications, which is not a matter of course for USB-powered interfaces. We were also positively surprised by the neutral, largely unaltered sound you get from the inputs. Therefore, all options for post-processing the recordings remain open here. Noise is also not an issue, as long as you don‘t turn up the gain controls to full. Only in the upper range does the noise increase quite clearly: You should avoid going into the interface with too low a level, especially since there is also less headroom than with a 24-bit interface due to the 16-bit resolution. In testing, M-Track Duo seemed to offer slightly more amplifier power than the Solo version, which pays off - especially with low-level microphones. We also liked the instrument input; when combined with the pleasantly low latency, you can easily use both interfaces with electric guitars and virtual amp simulations.

Beginners can start with both interfaces from the M-Track series, although in most cases the small upcharge of only 14 euro to the Duo version should pay off due to the better configuration, especially in the area of monitoring. Both inputs and outputs offer a transparent and largely undistorted sound, which is completely sufficient for the demands in the desktop studio. In addition, there are solidly programmed drivers with practical latencies and a comprehensive software package at a reasonable price.