<< Back to overview
Comparison test

The new versions of the virtual guitar and bass studios AmpliTube and Guitar Rig have been released just a few weeks apart. That’s reason enough to let the two plug-ins compete against each other in a comparison test! As similar as Native Instruments Guitar Rig 6 and AmpliTube may seem at first glance, the two amp simulations are very different in detail. While AmpliTube aims to recreate the sound of the most popular hardware amps, speakers and effects as authentically as possible, the competition from Native Instruments presents itself as a flexible combination of amp simulation and multi-effects rack. 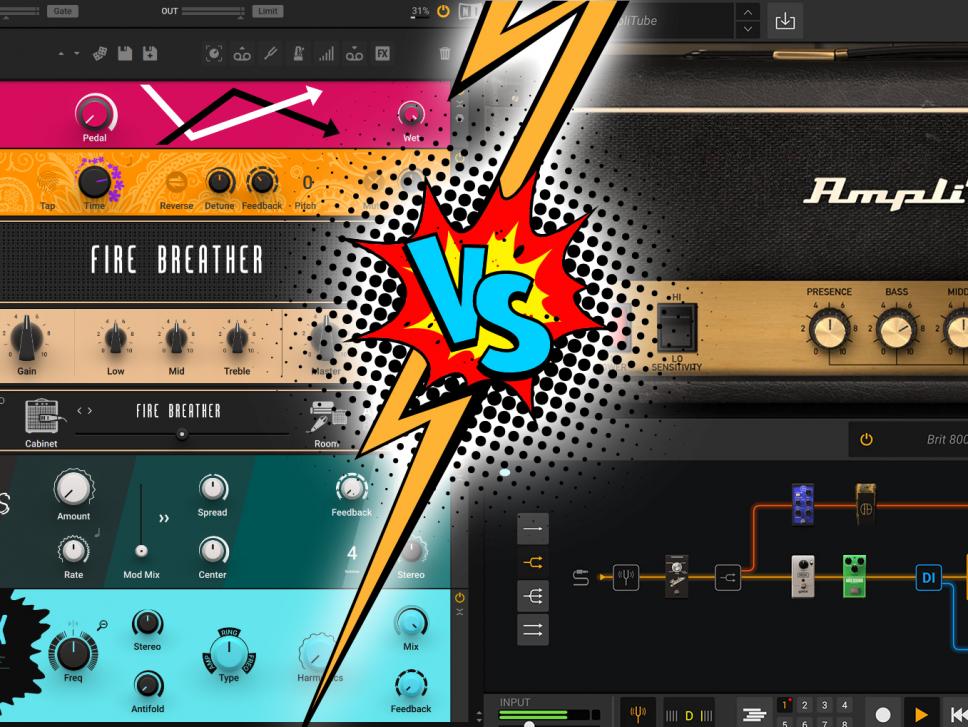 In the long-awaited Version 6, Guitar Rig is cleaner and more intuitive. With a new, scalable interface and many detail improvements, such as a new browser, this software takes a big step forward. Creating complex effect chains is quick and easy, and unlike AmpliTube, Guitar Rig even allows you to connect several amplifiers and speakers in series. The new Macro module allows you to assign different effect parameters to up to 16 knobs. This way, very impressive sound variations can be created with just one hand movement (or via MIDI controller). You don‘t always feel like creating completely new effect chains. And you don‘t have to because Guitar Rig 6 Pro comes with more inspirational presets than ever before, including some created by well-known musicians. All of the plug-in‘s presets offer ready-made mappings.

The new Chicago amp recreates a 1950s Fender amp that excels at clean sounds and warm tube tones. Fans of low tones, on the other hand, will be delighted with Bass Invader, which simulates a Gallien Krueger amp from the 1980s that was particularly popular for Rock. The third new model is called Fire Breather, which is inspired by Marshall and Friedman amps, and also sounds very powerful. The spectrum of this universal amp ranges from undistorted sounds to high-gain attacks. It‘s a shame that there are only three new amp models, at least so far, because Native Instruments plans to add new hardware emulations to the software in regular updates. There have also been optimizations on the cabinet front : Matched Cabinet Pro offers improved speaker sound for all models thanks to new impulse responses. Furthermore, there is now an expanded version of the time-tested Control Room, in which you can create eight custom setups from an arsenal of 27 cabinets, up to 16 mics and three mic positions.

With 16 outstanding new effects, Guitar Rig 6 Pro builds on its strengths as a flexible multi-effect. Those who are familiar with Native Instruments‘ effect plug-ins will immediately find their way around the new additions: The Crush Pack comes up with three tools for creative sound destruction, namely Frequency Shifter, Bitcrusher, and Distortion. Also on board are the three classic modulation effects Chorus, Phaser and Flanger from the very popular Mod Pack. With the Reverb Classics, two very successful Lexicon replicas also find their way into this software. The three emulations of legendary compressors, the Transient Master and the tools of the Solid Mix Series are a real enhancement to give sounds that final polish. In detail, these are a 6-band equalizer, a dynamics processor with compressor, as well as gate/expander and a bus compressor. Fans of spacey sounds will appreciate the multi-faceted reverb module Raum, the pitch-shifting reverb Replika Shimmer and the flexible delay effect Replika GR. The well-known filter/ distortion combination called Driver also invites you to sound experiments.

With its authentic recreations of legendary hardware amps, speakers and effects, this virtual guitar and bass studio is ready for any style of music imaginable. The three new amp models sound even more authentic and nuanced; and you can already look forward to more new amps. And with the new Matched Cabinet Pro, you can get even more out of your older amps. Thanks to its huge range of creative effects, modulation tools and flexible routing options, Guitar Rig 6 Pro is also an excellent tool for sound designers: an extremely flexible effects construction kit that can be used to elicit creative sounds from any conceivable input signal.

Thanks to detailed emulations of amps from manufacturers such as Fender, Marshall, Mesa/Boogie and Peavey, as well as recreations of sought-after cabinets and effects pedals, AmpliTube is very popular with both guitarists and bassists. Since the release of the last version of the software about five years ago, a lot has happened in the field of amp modeling. With Version 5, AmpliTube aims to catch up with the new generation of amp emulations in terms of authenticity. Visually, the software shines in new splendor with a newly designed, now also scalable user interface.

AmpliTube 5 is available in four variants, including the free AmpliTube 5 Custom Shop version. The flagship of the product family is AmpliTube 5 MAX with over 400 gear models, which also includes 11 brand/artist collections such as Ampli- Tube Jimi Hendrix, Brian May, Joe Satriani and Dimebag Darrell (Pantera). The signal path in the software is now drag- and-drop customizable and even more flexibly configurable: In addition to mono and stereo configurations, rigs with three amplifiers, as well as serial and parallel routings are possible. Or how about adding the DI signal to your amp sound? A total of 57 gear models including foot pedals, racks, amps and cabinets can now be used simultaneously. With Search and Favorites functions, as well as Tags and Keywords, the browser of AmpliTube pre- sents itself very as very user friendly. Testing and buying new gear models is now even easier thanks to the newly designed AmpliTube Custom Shop.

New gear for guitar and bass

Highlights of the 129 new gear models include a bass overdrive pedal based on the Tech 21 SanSamp and an emulation of the MXR distortion pedal, as well as convincing replicas of amplifiers and speaker cabinets from Aguilar, Bogner, Diezel, Friedman and PRS. By optimizing the gain structure and the improved power amp modeling, the sound of old modules has also been much improved.

One of the most important innovations in AmpliTube 5 is, undoubtedly, the improved Cabinet section, in which the innovative IR technology „VIR“ has been implemented. For a realistic sound, up to 2400 impulse responses have been created for each of the 100 cabinets using an automatic, robotic process. If you wish, you can even replace individual speakers in the cabinets. Due to the freely selectable placement of the four virtual microphones in front of the speaker cabinets and in the room, the timbre can be created almost as freely as in a real studio. However, we would have preferred to see an Undo/ Redo function - just like in Guitar Rig 6. Also, a new feature is the option to load your own impulse responses. The sound can be adjusted quickly and easily with the adjustable size of the emulated speaker and with a tilt equalizer. Impulse responses from third-party suppliers, therefore, open up completely new sonic possibilities.

In the integrated mixer, you can combine several speaker and microphone signals, as well as the DI signal, as you like. Very welcome additions are the 19 new mixing effects, some of which are based on the high-quality plug-ins from T-RackS 5. A wide range is covered between equalizers, dynamics processors, as well as saturation, reverb and creative effects.

The standalone version of the software also comes with a Multitrack Looper that lets you quickly and easily record and layer ideas. Audio files can be loaded in many common formats and, of course, there is also an export function. The integrated SpeedTrainer is a practical tool for practicing or learning your favorite riffs.

Whether you want a clean, overdriven, distorted, or high-gain sound, Ampli-Tube offers remarkably flexible ways to create the guitar or bass rig of your dreams. This plug-in delights with dynamically playable amps, as well as a huge range of virtual pedals and great-sounding studio effects. For many, the ability to load your own impulse responses will surely be one of the highlights of this new version. AmpliTube is still the first choice if you want to recreate the guitar or bass rig of your idols in software form because no amp modeling software offers such a large and expandable selection of amps, cabinets and effects for guitar and bass. And the sound has become even more powerful, defined and nuanced in Version 5.