<< Back to overview
Review

The Moog Subsequent 25 presents itself as a worthy successor to the Sub Phatty with duophony and more scope for saturation and distortion. 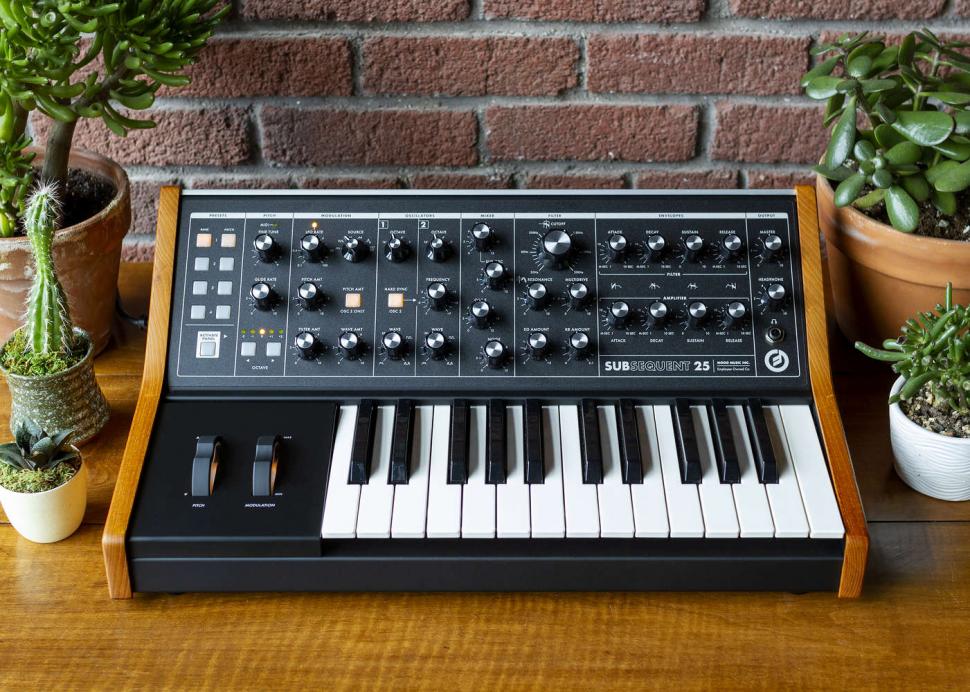 The most obvious difference is the keyboard, which only has 25 keys on the smaller model instead of 37. Unfortunately, the aftertouch, which is so important for a lead synthesizer, has been omitted; the keyboard on the Subsequent 25 only processes velocity. Compared to the Subsequent 37, a lot of controls and the display are missing; however, the most important sound parameters are still available for direct access; less used functions can be reached via shift combinations and using the free editor. The illuminated wheels for pitch bend and modulation correspond to its big brother.

The purely analog synthesis of the Subsequent 25 is almost identical to that of the Subsequent 37. Two oscillators (VCO) serve as the sound sources with the triangle, sawtooth and square waveforms featuring adjustable pulse width, which can be continuously crossfaded as is typical for Moog. This parameter is available as a modulation destination, which allows waveshaping of the other two waveforms in addition to pulse width modulation. Oscillator 1 additionally offers a suboscillator for mercilessly deep basses. In addition, there is a noise generator as well as either an external audio signal or a feedback loop as is familiar in the Minimoog tradition.

This internally pre-wired Feedback loop expands the sound spectrum compared to the Sub Phatty, which allowed you to simulate this by using cables from the headphone output to the audio input, but the sonic results were less impressive. The signal from the mixer goes into a ladder low-pass filter with the legendary Moog sound, which also allows flexible sound shaping thanks to different slopes from 6 dB to 24 dB (at 6 dB with resonance even MS20-like sounds are feasible) and masters self-oscillation. With Multidrive, saturation and distortion can be set before the signal reaches the amplifier and from there the audio output.

In the Subsequent series (25 and 37), the circuits for saturation and distortion, which are so important for the sound, have been reconfigured and optimized, so that the sound of the Subsequent 25 can differ more or less clearly from the Sub Phatty, depending on the settings. The mixer has been given significantly more headroom with the result that you have more leeway with the volumes of the oscillators. This is especially important in connection with sounds played duophonically - this option is not available with the strictly monophonic Sub Phatty. Combined with improved gain staging in the filter, this audibly expands the sonic possibilities of the Subsequent 25; between clean, undistorted duo sounds and heavily saturated and analog-compressed punchy sounds, there are now also plenty of intermediate stages.

The Multidrive has also been adjusted and now allows for more subtle adjustments in addition to the familiar powerful saturation and distortion. Interestingly, the Subsequent 25 can not only sound cleaner than the Sub Phatty, but also more aggressive and distorted. At first, this seems like a contradiction, but the reason is that the Subsequent 25 sounds even more detailed and rich in overtones than its predecessor, even with more distortion, which is primarily due to the improved resolution of the multidrive.

Two complex envelopes featuring delay, hold and loop functions are available for modulation, but you only have direct access via the controls for attack, decay, sustain and release. In addition, there is a single LFO, which corresponds to the equipment of the Sub Phatty. The Subsequent 37, on the other hand, has two LFOs. The modulation sources are very fast, besides snapping basses, this also allows frequency modulation, since the frequency of the LFO extends into the audible range. Of course, the LFO can also be synchronized to the clock, with adjustable divider. However, here you have to rely on your hearing, because, due to the lack of a display, the current value can not be viewed.

Unlike the Sub Phatty, this synthesizer can also be played duophonically, which is achieved by controlling the pitches of the two oscillators separately. Since they have to share a filter and amplifier, interesting pads and leads can be played, which neither a pure monophonic nor a classic polyphonic synthesizer can do in this way. The various glide options that can be set under the hood are particularly interesting for lead sounds.

The Subsequent 37 has both a flexible arpeggiator and a complex step sequencer whose patterns can be saved with each sound and which is definitely an important part of the independent sounding patches. Unfortunately, you have to do without this completely on the Subsequent 25, which, in our opinion, is probably the biggest limitation compared to the Subsequent 37 - besides the missing aftertouch on the keyboard. If you only want to control the synthesizer via your DAW or use it primarily for solo leads, this limitation is, of course, less important.

The side-mounted connections are identical to those on its big brother. A USB MIDI port, MIDI IN/ OUT jacks in DIN format, as well as an analog gate input and three CV inputs, are available for connection with the outside world. Except for the filter CV input, all analog inputs can be freely switched using the modulation matrix and, thus, assigned to various parameters such as filter decay and noise level.

Many functions that are directly accessible via controls on the Subsequent 37 are only available on the Subsequent 25 using key combinations in conjunction with the existing knobs and keyboard. Unfortunately, as with the Sub Phatty and Sirin, Moog has neglected to print these dual functions on the panel. Presumably this has design reasons so, unfortunately, you have to learn the combinations by heart or always have the manual on hand. As an alternative, Moog offers registered owners a free editor that is available in both standalone and plug-in form (including Total Recall when used in any DAW) and provides access to all parameters including the functions hidden under the hood. The editor runs stably and reliably backs up the patches with your song, so it is a real added value.

Due to the multitude of options, the Subsequent 25 shows itself to be very flexible in terms of sound generation. From rich basses to fat leads to wide strings, it masters all facets of a monophonic synthesizer to perfection. The focus, however, is clearly on powerful, raw analog sound with saturation and harmonic distortion. The Sub Phatty can do that pretty well, too, but when more transparent, softer sounds were required, these predecessors of the Subsequent 25 had some difficulties. Here, the volume of the oscillators could only be turned up a little to achieve a clear and reasonably undistorted sound. This, in turn, had a direct effect on the multidrive.

Because the individual saturations in the Subsequent 25 through the hot start of the filter, feedback loop and multidrive must not be seen as separate sections, but they interact with each other and with filter and amplifier and are an important part of the sound. This is where the Subsequent 25, with its additional headroom and improved multidrive and feedback, clearly has the edge over the Sub Phatty. Sonically, it is also on par with the Subsequent 37, which, however, is a bit more flexible due to the second LFO, as well as an arpeggiator and step sequencer with modulation track.

Louder and more sophisticated than the Sub 37

The Subsequent is a worthy successor to the popular Sub Phatty. The additional headroom that the Subsequent 25 offers in mixer, filter and associated saturation stages now also opens up access to cleaner and more transparent sounds, which pays off - especially in the also new duophonic mode. Sonically, the well-crafted and chic-looking synthesizer proves to be very flexible and offers modern analog Moog sound that fits well in the mix and can be easily recalled at any time thanks to memory and editor. If direct access to the essential sound settings is sufficient for you on stage and you use an external sequencer and computer with editor in the studio anyway, the Subsequent 25 can also be a more compact and cheaper alternative to the Subsequent 37.