<< Back to overview
An eight-voice Oberheim that delivers much more than the familiar jump sound? With the OB-E, GForce Software revitalizes the vintage sector. The unique concept and the individual analog sounds define a class of its own.

An eight-voice Oberheim that delivers much more than the familiar jump sound? With the OB-E, GForce Software revitalizes the vintage sector. The unique concept and the individual analog sounds define a class of its own. 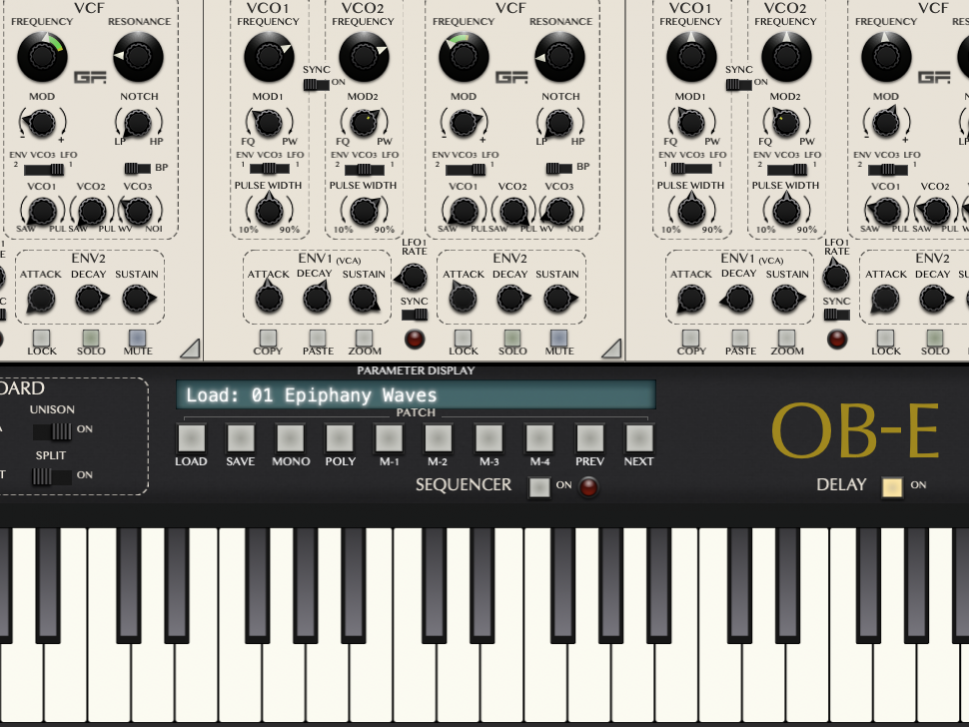 G Force Software has always had a lucky hand when it comes to emulating vintage instruments. With the ImpOscar, modeled after The Oscar monophonic analog synthesizer, as well as the exquisite Mellotron reconstruction aka M-Tron Pro, the software audio developer from London has made a name for itself. With the OB-E, GForce Software fulfills a special wish that became big among its own clientele. The OB-E is an eight-voice virtual analog synthesizer based on a simple, yet special concept: Take a single Synthesizer Expander Module (SEM) by Tom Oberheim and multiply it into an inspiring instrument that today is available as a plug-in and therefore avaible for every musician.

The prototype, the Oberheim Eight Voice, was built between 1977 and 1980. This synthesizer was played only by a few exceptions like Herbie Hancock, Chick Corea, Styx and Rush and was overshadowed by flagships of the time like the Oberheim OB-8 and the Roland Jupiter-8, which came on the market later. The eight SEMs in the OB-E can be grouped as lower and upper and distributed over two keyboard halves. Each module is equipped with two oscillators, two envelopes and a multimode filter. As with the Minimoog, the third oscillator can be used as an LFO, thus providing two LFOs. But what is really special about it? Well, the OB-E is one of the few software instruments where each of the eight voices can be controlled. Unfortunately, the instrument is a bit spartan when it comes to effects. Only a programmable stereo delay is available; therefore, you will have to polish up the sound more often with external FX plug-ins. The 8-step sequencer integrated in the OB-E is not available in the original - that’s a very useful bonus.

Sound and in practice

The OB-E has a good library with over 600 presets, including a simple browser function. In addition to bass, pads and so on, you will also find somewhat more unusual sound sections such as „Sequence Chord“, „Sequence SEM 8“ and „Split Poly“. A section with the 30 best sounds kicks things off. These presets demonstrate what this synthesizer is particularly good at with its warm, balanced bass sound and exquisite filters. First of all, these include refined layered chords that are triggered with only one note. Warm and milky shimmering pads also suit it very well. And, of course, the eight modules can be activated in unison for massive solo and bass sounds. Brutal, powerful and really aggressive sounds are not that easily possible with the OB-E. You will have to use a compressor, EQ and other plug-ins to help you out. Sound-aesthetically, the presets clearly aim towards the past. Of course, the styles of the Berlin School and Fusion are also represented. For Techno and more contemporary electronic music, you would have to create suitable sounds yourself or choose other synthesizers. And what about sound design? The occasional sound tweaker will be a bit overwhelmed at first, because who has eight individual synthesizers under control at once? Of course, the developers know that and have, therefore, given the OB-E a „Group Mode“, in which all SEMs voices can be edited simultaneously. At the other side of the coin, each module is programmable in detail in an enlarged representation. It makes sense to start with one SEM and then to develop further - an alternative way of working.

It is practically impossible to get hold of the OB-E as hardware, which is all the more reason to be happy about this product from GForce Software at a fair price. This software conceptually brings a breath of fresh air into the field of analog synthesizer emulations. Its strengths lie in the vintage area. The sounds of the synthesizer are impressive and it already provides many useful presets for retro music; however, when it comes to the „straight Oberheim sound“, alternatives like Obession from Synapse Audio are the better choice. They are easier to use and sound more up-to-date. With OB-E, you have to be a little more patient and get used to the GUI, which doesn‘t immediately encourage you to edit. Those who like to experiment, however, will get a great and inspiring tool. Although it is not modular, it tempts you to make music more quickly. A „Great Thanks!“ to London! It‘s worth getting to know this fantastically emulated synthesizer rarity. Particularly, multi-layered analog sounds can be coaxed out of the OB-E and finally get them going with the sequencer. A top recommendation for vintage synth fans!