What would be the best name for a combination of Bitcrusher, Harmonizer, Filter and Envelope Follower? Manufacturer Neuzeit Instruments has chosen Orbit and presents us with its Eurorack module featuring just those components under one hood. However, with (brute) peculiarities ... 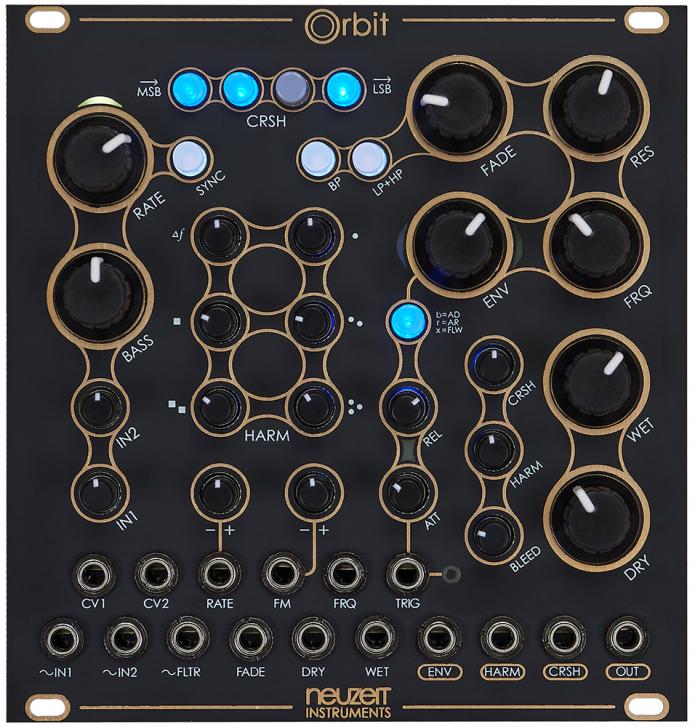 Published 7:33 am on Tuesday 7th September 2021 by Beat Magazine

With many other simple modules let you see at first glance what they do and what happens to the signal, you have to learn a lot first with Orbit. While the basic function of the Bitcrusher is quite obvious, four buttons named MSB and LSB with three different modes each create question marks in front of the mind‘s eye. The same with the Harmonizer and its six controls, which are only titled with small symbols. Fortunately, there is an informative tutorial video from the manufacturer, which quickly brings a lot of light into the darkness.

In principle, a signal in Orbit runs in parallel through the Bitcrusher and the Harmonizer, both of which end up in the filter; while a third, unprocessed version runs directly to the filter. All three can be mixed separately via controls. In addition, the filter offers an extra input that can also be used to create feedback loops, since the Harmonizer and Bitcrusher offer separate outputs. A mini EQ sits in front of the Bitcrusher, boosting or cutting the bass. This is extremely welcome - especially when playing with sample rates. The Crusher works with either 8 or 12 bits and does what you‘d expect of it, but with an extra feature: Four buttons let you turn bit ranges (for lows, mids and highs) on or off independently, or invert them, which lets you target the Crusher more specifically to certain frequencies.

The Harmonizer is a real highlight in the module, because it analyzes the pitch of the signal at the audio input and adds up to five square wave oscillators. One of them is at the same pitch, two others are one octave below and one octave above. Too little sub-bass is, therefore, no longer a problem. Oscillator four and five also work at the same pitch and an octave above, but the exact pitch can be adjusted by +/- 12 semitones by means of a slider. The result is not only chords and enormously rich sounds, but also wacky ones. While clean waveforms are „only“ thickened as expected, vocals and drums have an extremely large number of artifacts that develop an impressively groovy life of their own, especially when combined with the filter and its envelope follower. Basslines in particular are created so quickly and are always harmonically and rhythmically appropriate to the supplied signal. Top! If you want the results to sound even crisper, Hardsync is available as an option. The pitches of the latter two oscillators can also be fixed, for example, to thicken drums without the pitch varying permanently. Or for generating constant basslines, which are created together with the envelope follower. Last but not least, both oscillators can also be used as noise sources to create hi-hats and shaker rhythms.

More than just a filter

The third and last station in the signal path is the Filter or Multifilter. Low-pass and high-pass can be crossfaded using a fader, and the band-pass filter runs in parallel. Both paths can be switched on and off separately and are equally influenced by cutoff and resonance. Using both at the same time results in even fatter sounds, but without overloads. For clear signals, however, it is recommended that only one filter type be used. The sound is extremely rich and whistles properly when the resonance is turned up. By the way, the filter produces a sine tone at full resonance and is tonally playable thanks to the modulation input. It‘s just a pity that the Filter output can‘t be routed into the Bitcrusher or Harmonizer. Speaking of modulation: The Envelope Follower can work just as well as a regular envelope with Attack and Decay and is also loopable, which makes it possible to convert it into an LFO.

It‘s not hard to see: The Orbit is quite a multi-talent and not squeamish in any of its disciplines. The Bitcrusher can also intervene gently, but it prefers to just smash the signal mercilessly, so that it comes crashing out of the speakers. But no matter whether you feed simple waveforms, complex loops or vocals, the results always sound pleasantly dirty and crisp. Add the Harmonizer with its five oscillators, and the definition of „fat“ would have to be rewritten. Thanks to the clever envelope with its different modes, the module is not only an effect, but also a great supplier for basslines, strange grooves, ghostly synth vocals and much more. The only flaw: The 23 knobs have clearly too little space. Apart from that: superb!