<< Back to overview
Review: Chronovore

Fans of Roland‘s TR-303 will probably cheer now, while others will scratch their heads and ask why you should build a sequencer from 1981 into the rack. Clearly, the 303 is famous for more than its sound alone, but also for its idiosyncratic patterns, especially thanks to its characteristic slides and accents. And with a sequencer like this, they can be used with any sound. So is this the ultimate hookline machine? 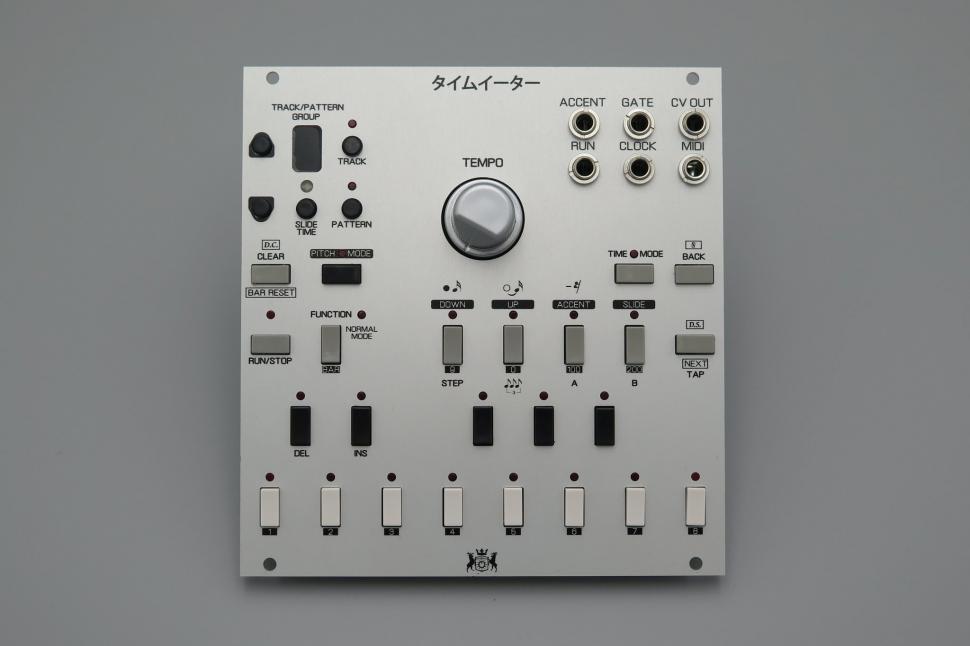 The patterns in this module are up to 16 steps long and contain one note value per step, which in itself already covers all similarities with other sequencers. In addition, each step can be transposed an octave via the up or down buttons, and slide and accent can be added. In contrast to the usual portamento on other sequencers, the 303-Slide does not start at the end of the note, but at its beginning and also extends the current step into the next one. This is of course a simplified explanation, because the real magic behind the slides is even more complex and that‘s exactly why they are so unique and famous. Since Michigan Synth Works Chronovore has no sound generation of its own, the effect of the slides depends heavily on the programming of the modules used.

Accent, in turn, sends a simple CV pulse that can be linked to any parameter, such as the filter resonance, if the result is to sound like a 303. Outputs are Gate, Pitch, Accent and inputs are Run, Clock and MIDI, which can be used to synchronize the module to external sources. For the MIDI input, the manufacturer provides an adapter cable so that any MIDI source can specify the clock.

So far, so good and probably still comprehensible. The matter becomes much more complicated as soon as it comes to programming the 32 available patterns. Where others display a number of the current step and wait for input, the Chronovore shows all the idiosyncrasies of the 303 original.

The sequencer distinguishes between tracks and patterns, whereby the seven tracks offer a kind of song mode in which patterns can be connected in series. The patterns are divided into normal and pitch mode. The former is responsible for playback, the latter for entering notes, slides and accents. But this mode can only be called up when the pattern is in write mode. Since the current step is not displayed in any form, the overview is lost more quickly and the reworking of existing patterns is feasible, but it is extremely awkward. So, if you have never used a 303 before, you will likely be sitting there in despair in front of the module, because the programming is anything but self-explanatory.

There are additional peculiarities, which we won‘t go into for reasons of space, but the conclusion is the same: a few hours of familiarization and practice are mandatory; otherwise, the module will not bring you the desired level of fun. Unfortunately, there is no official manual at the moment, so the inclined user will have to resort to tutorials from the original.

Once you have overcome the programming hurdles, however, the sun rises because this is when the module shows its true strength: the typical hook-, bass- and acid-lines of the TB-303. In our test, we connected the sequencer to various sound modules and were impressed on the one hand by how much an ordinary A-111 oscillator from Doepfer can sound like a 303 when played by the appropriate sequence and, for example, the filter resonance is controlled by Accent. On the other hand, we were thrilled by the results the Chronovore delivers together with Plaits from Mutable Instrument when accent changes the sound creation or affects the FM knob.

Chronovore is a very special kind of tool. The sequencer is extremely authentic and, thus, a curse and a blessing at the same time. After all, in 2021, this complicated kind of pattern programming not only feels oldschool, but is cumbersome and, therefore, restricts the circle of users exclusively to purist 303 fans. On the plus-side are the faithful and unique results - you‘d probably never create patterns exactly like this with modern sequencers. And once you‘ve gotten to grips with the way it works, there‘s no shortage of fun either. If you like 303 sequences, you will have great fun with this uncompromising module.