<< Back to overview
Digital synthesizer

Uncompromisingly digital and proud of it - the flexible Nemesis digital synthesizer benefits from improved operation and additional waveforms and effects in Version 2. 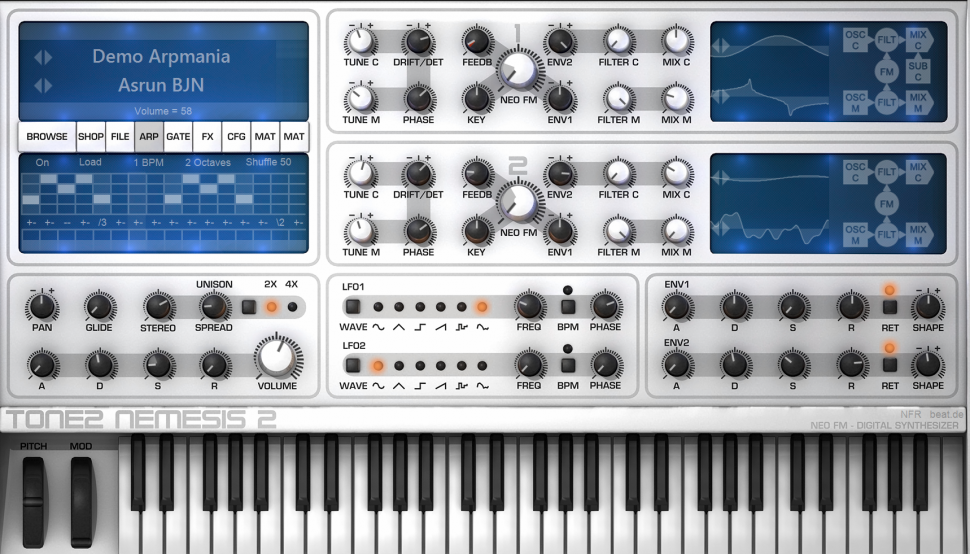 The Additive Spectral Editor can be used to bend the included or imported waveforms to fit.

The main focus of this free update was on improving the operation and general handling, which is already evident when loading the plug-in. Loading is now noticeably faster than with its predecessor, and the optimizations are also apparent when switching presets. The user interface has been adapted to modern hardware with higher resolution; four sizes are available and the plug-in automatically detects the perfect resolution for your monitor. The increased contrast is easy on the eyes and makes navigating in the browser easier. In addition, there are numerous improvements to the standalone version, which now offers an audio recorder, among other things.

Nemesis is digital from the ground up and doesn‘t even try to compensate for this with virtual-analog borrowings. Over twenty synthesis types that can be combined with each other cover a very broad spectrum of digital sounds, including the classics: FM, Additive, Formant and Wavetable synthesis, Waveshaping, PWM, Sync and Ring Modulation. Two oscillators form the basis, each with a carrier and a modulator wave as well as parameters such as detuning, drift, phase, FM intensity and feedback. Of particular interest is NeoFM, a mixture of the phase modulation of the DX7 and others, and the FM of analog synthesizers. Besides classic sine, other waveforms can be used for FM, which makes sound design more flexible and also allows for more skewed and distorted sounds. In Version 2, the supply of waveforms has been significantly increased once again. A total of 119 new waveforms have been added, including several „noisy“ and „complex“ variants. Nemesis‘ sound spectrum is expanded by the ability to resynthesize your own waveforms and edit them in an Additive Spectrum Editor. You can import your own samples and use them for FM or other digital algorithms. To control the resulting overtone orgies, there is a low-pass filter. In contrast to the subtractive synthesis of analog synthesizers, it acts directly on the waveform, which allows you to intervene more specifically in the sound spectrum. Nevertheless, we would have liked to see a downstream resonant filter of the classic kind for some sounds.

Since not all combinations of algorithms and waveforms produce immediate musical results, experimentation is the order of the day. Even if you have some experience with synthesizers and their programming, Nemesis is always good for interesting surprises and novel sounds, while specific programming does not always lead to the same goal. Fittingly, Nemesis 2 has a new Random function that provides random sound variations. With such a complex synthesizer as Nemesis, the results achieved range from amazing stand-alone signature sounds to barely usable digital chaos sounds. A modulation matrix provides movement in the sound, but having only two LFOs and envelopes seems a bit insufficient to us.

The two effects units are of the usual high quality and flexibility, and have been expanded once again. The new classic analog chorus is useful, which softens the often quite hard sounding digital sounds pleasantly and makes them sound rounder. In addition, Nemesis in Version 2 can provide even thicker sounds, since in the well-known SuperSaw manner, you can optionally layer 3, 5, 7 or 9 voices. And the new Haas effect provides for a widening of the stereo panorama. The multitap, delay, pingpong, delaydual, and doubler delayband effects have been reworked and now sound less out of tune, which increases their practical usefulness.

The powerful duo of arpeggiator/StepLFO and Gate Sequencer is also an important part of the sound generation, whose palette ranges from FM classics to modern Wobble and Electro sounds. The strengths lie in raw, aggressive and assertive digital sounds that are set in motion with the modulators.

Many detail improvements make this flexible digital synthesizer even more accessible, while the additional waveforms and effects expand the already huge creative and sound potential. If you are looking for unique and fresh digital sounds, Nemesis leaves little to be desired with a combination of different sound synthesis, inspiring arpeggiator and good effects.