You can never have enough sounds and presets. To expand the sound archive of Xfer's Serum software synthesizer, we looked around for worthwhile presets and wavetables for you and discovered over 2000 of them. They cover a wide range of electronic music genres. Best of all, they're all free! 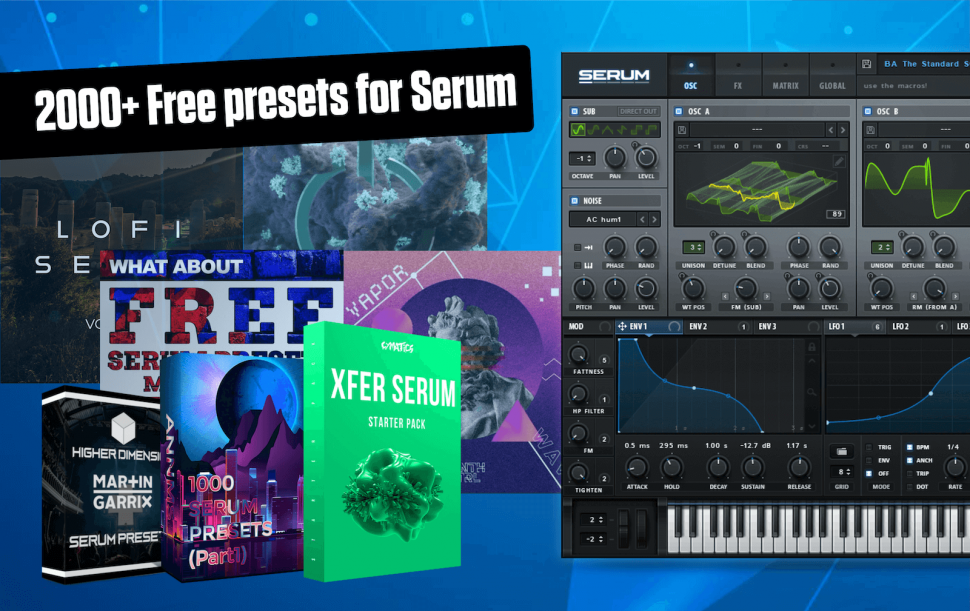 Dubstep, Hip-Hop, Trap and others

What you should know about Xfer Serum:

Two oscillators with sub and noise, one filter, three envelopes and four LFOs. However, all sections offer much more detailed access and more options, so the division four subwindows makes sense.

For example, a wavetable can consist of 256 sections, compared to 128 in Codex, and the waveforms are also displayed as graphics here, in 2D or 3D if desired. There are over 100 wavetables to choose from, which can be edited via an editor. In this editor you can also draw your own wavetables, save them and import samples. Eight methods are available for the import, in order to convert the respective source in the best possible way. The editor is extremely easy to use, so that your own creations can be made in no time.

Once the wavetable is selected, it can be multiplied up to 16 times via unison. A random controller provides varying starting points per note if required.

A great feature of the playback: The waveforms can be warped. There are 22 different modes available for this. Besides stretching and compressing the waveforms, typical sync sounds are included, as well as frequency or amplitude modulation with the other oscillator, quantization of the waveform, and so on. So the possibilities are already enormous with the oscillators alone.

In addition, there is a sub-oscillator and noise. The former offers 6 waveforms, can be transposed octave by octave and can be routed directly to the output via a switch. Noise, on the other hand, is not just simple noise, but can choose from a pool of 187 samples of all colors. The selected sound can be fired as a one-shot - for example to give drums more crunch - or run in a loop. 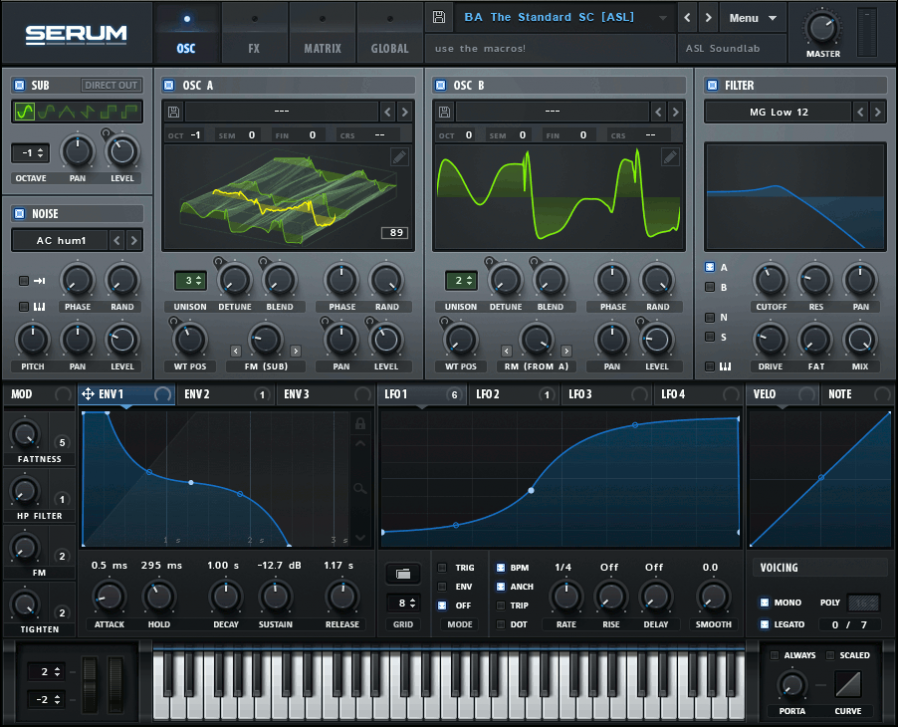 Once all oscillators are set, it's the filter's turn. In addition to the usual high-pass and low-pass variants, there are multi-filters that can be crossfaded from bandpass to notch, for example, using the mix control. The more than 90 filter types also include phasers, flangers, comb and peak filters, as well as experimental models such as reverbs, ring modulators and formant filters. A dream for every sound designer.

Serum is similarly flexible with its LFOs. These act either as a cyclic waveform as usual or as a step sequencer with freely drawable steps. Programming melodies requires some patience here, but wacky modulations in sync with the tempo can be programmed in no time.

Assigning a modulation source to a destination works via the mod matrix or by simple drag & drop on the desired knob. A blue icon indicates that the knob is assigned to the currently selected source. Very practical!

As you might expect, the effects section of the plug-in is not stingy with a rich selection. The 10 effects offered include modules such as distortion, flanger, chorus, delay and reverb, which are quite familiar fare, but on a very high sonic level. The order of the effects is flexible and almost all controls can be modulated. Top!

Hardly surprisingly, the mod matrix doesn't just list the connected parameters either. Because each modulation has an additional "Aux Source" if desired. Thus, for example, an LFO modulation of the pitch could be threaded via mod wheel.

But how does the synth sound now? That is quickly brought to the point: Fantastic! The lows and mids are punchy, the highs clear and transparent. If you listen through the presets, it quickly becomes clear that Serum is at home in every category. Whether it's basses, leads or pads, the patches are bursting with richness, punch and width. Thanks to the variety of options of the oscillators and the filter, the strong side can be tickled out of every wavetable. And if you don't want to tinker yourself, you can help yourself to the extensive and modern sound bank.