<< Back to overview
Live 11 is ready to start and should be available in spring 2021.

Live 11 is ready to start and should be available in spring 2021. Anticipation is fueled by the announcement of numerous new features. On board are comping, MPE support, new instruments and effects, random functions and tempo control. The list is long in terms of new features and improvements. Reason enough to take a look at what can be expected from the program update. 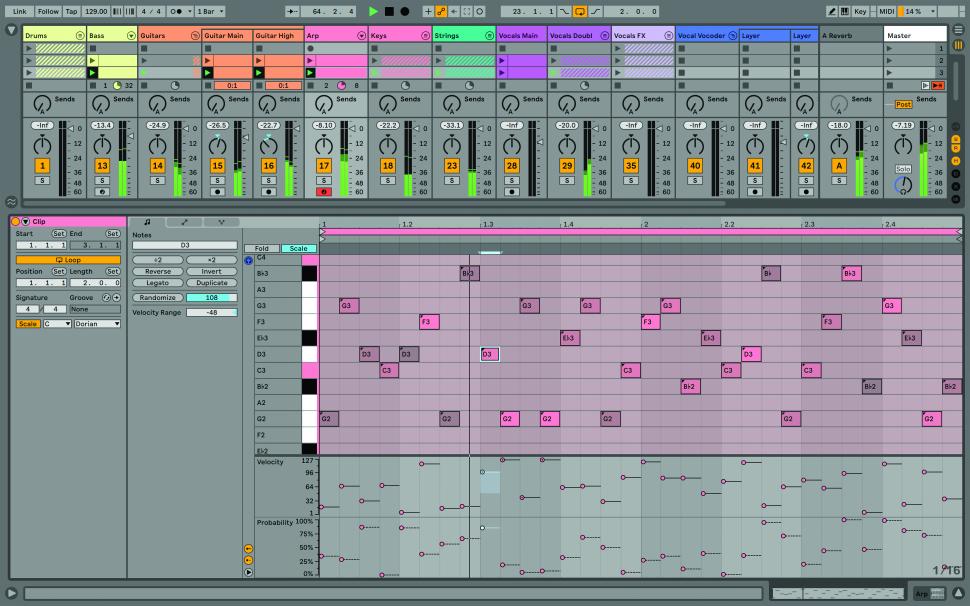 Published 8:33 am on Wednesday 3rd February 2021 by Beat Magazine

With a quick glance at the open program interface of the beta version of Live 11, almost everything appears to have remained the same. But first impressions can be deceptive. If we quickly load a MIDI controller, play a clip, and then open the clip view - then a whole series of new features jump right out at you. For example, there is a probability function in the clip view that allows you to vary the probability of notes and drum beats being played; that is, to specify for each note the probability with which it will or will not be played. This creates constantly changing variations as a clip plays. Likewise, the range for possible velocity variations can be defined or randomly changed, creating dynamically varying clips.

Follow Action can be used to automatically combine clips as well. A number of improvements have been made here: Follow action has its own view, which can be expanded via the clip view. This function can be switched on and off both globally and for each clip individually. This makes subsequent editing much easier. The probability of one or two defined follow actions occurring is now expressed as a percentage of each other, rather than a number between 0 and 999. The Action list includes a new action called Jump, which allows clips to jump to any other clip on the track.

When a follow action is triggered, it can be defined either in measure lengths, or in clip passes - regardless of their measure number. Another new feature is that follow actions can be assigned not only to individual clips, but also to entire scenes.

The biggest innovation in Live 11 is the new comping feature. This means that multiple takes or even loop passes can be recorded in a single track. Then, you simply open the take lanes, in which you can see all the recordings. The takes can be listened to individually and then you simply select the best parts from the recordings and move them to the main track with one click - there they combine to form a perfect take. This works equally well for audio and MIDI recordings. To edit multiple tracks simultaneously, the tracks can now be linked. For example, warp markers or clip fades no longer have to be generated for each clip individually, but are set for all tracks simultaneously, saving you a lot of time.

The potential of MIDI Polyphonic Expression-enabled MIDI controllers can now be harnessed in Live 11. MPE controllers can be used to record expressive pads and sliding tones over each other using bending, sliding and pressure playing techniques. Now, recorded MPE performance data can be adjusted later in the specially expanded Clip View area. And, even if no MPE controller is available for the performance, the Expression View can be used to add special performance touches to each individual note, since MPE is now supported by Wavetable, Sampler and Arpeggiator.

Live 11 comes with a whole range of new instruments, effects and sounds. With the Spectral Resonator, sounds can be completely deformed. Using a MIDI sidechain, the key can be adjusted and the effect can be played like an instrument. The second spectral effect, Spectral Time, is a delay effect that converts an incoming audio signal into harmonics. These are sent through a frequency-based delay, which then produces metallic-sounding echoes, for example. Sounds can also be frozen to create stutter or glitch effects on the fly.

The Hybrid Reverb is an exciting combination of convolution reverb and algorithmic reverb. It can be used to recreate any imaginable space, from the real thing to the physically impossible. Also equally exciting is a series of six experimental „Max for Live“ instruments or effects that appear together under the name Inspired By Nature. They take an experimental approach, recreating various physical processes that act as compositional patterns. Tree Tone, for example, creates a fractal pattern inspired by plants and uses them as resonators.

Bouncy Notes is a MIDI sequencer and arpeggiator based on the principle of gravity. Vector Grain, on the other hand, is a granular looper that represents sound modulation in the form of particles that can be deflected by magnetic forces or that rotate in a flow field.

And then there‘s another little highlight, the new pitch-shifting effect called PitchLoop89, which is modeled after the legendary Publison DHM 89 from 1978. At the time, this device was one of the first commercially available digital audio devices in the world, and was considered a high-end studio class tool.

This Live 11 variation was designed for both studio and stage use and is particularly well suited for shimmering delays and spherical vibrato effects.

Live performance has also seen some changes: With the new follow tempo option, Live 11 allows the computer to become a band member or turns it into a BPM-synchronized multi-effects device that can be integrated into any DJ setup. Live 11 no longer sets the beat, but can adapt to an incoming audio signal.

Racks are ideal for parameter controlling, as they allow quick access to selected parameters by means of macro controls. Instead of the previous 8 macro controllers, up to 16 controllers are now available. They can be reduced or expanded as needed, so that, optionally, only 1 macro controller, or two, or four, or all 16 are displayed. If you don‘t want to have to remember the settings, simply take a snapshot of the macro controllers. These are stored in an integrated window in the rack, and can be named and recalled at any time. In this context, the new randomize function in the rack provides for inspiring macro settings that are simply held on demand. This is not only a helpful tool for live performances, but the snapshots can also provide interesting sound variations and variety in production by means of automation.

In the browser, the audio effects have been categorized. In addition, the category list contains the groove patterns, as well as templates. Adding to the templates that are already included, such as a podcast template and an 8-track recording template, you can also save your own song or track templates. Another striking feature is the continuous numbering of the scenes, which is retained even when you move scenes around. Individual tempo and time signatures can also now be set for each scene.

If you take a closer look at the clip view, you will see that it has additional tabs and fold-out sections, such as the separation into notes/sample, envelope and expression views, and an extra section for follow actions. This allows quick access to the most important setting options for MIDI and audio clips and simultaneously provides a better overview. With multi-clip editing, you can choose to edit only the notes in one clip, as in Live 10, or to edit multiple clips simultaneously when Focus mode is disabled. This allows you to, for example, quickly transpose multiple instruments at the same time.

In the clip view, you will also find the scale option that is familiar from Ableton Push. Here you can define a root note and an associated key. The selection of scales ranges from major and minor, to the more common church scales, to exotic scales such as pelog selisir or bhairav. When scale mode is activated, the notes associated with the scale are highlighted in color in the clip editor, with the root note in the piano roll being emphasized even more. This function is not only helpful if the music-theoretical contexts are not so familiar, but basically invites everyone to embark on new paths, like diving into new tonal spaces, for example.

One new feature is that you can now select whether the average or current value is displayed in the processor load display. In the case of an overload, you can also see whether it is a CPU or disk overload. In addition, there is a display of the CPU load-per-track. This allows you to quickly locate processor-intensive instruments or effects and, if necessary, replace them, freeze them or optimize them so that an overload no longer occurs.

Live 11 includes a whole new set of sounds. These include a voice box with intuitively playable vocal instruments and effect racks for vocal processing and manipulation. You will also find a brass and a string quartet, each featuring a collection of high-quality wind and string instruments, respectively, each with a focus on the expressiveness and wide sound spectrum of their instruments. Both instruments, as well as the upright piano that delivers the warm sounds of an acoustic piano, were developed in collaboration with the soundsmiths over at Spirtfire Audio. Cinematic quality atmospheric sound layers can be developed with the Mood Reel, while the Drone Lab offers an entire range range of sounds from tonal samples to generative noise.

In addition, some of the effects have been updated that are quite impressive. The Phaser Flanger and the Chorus Ensemble are very successful in terms of the new possibilities, their visual presentation and their sound results. And Redux has also been completely reworked and offers much more flexible application options, for instance, thanks to the newly integrated Dry/Wet control. The core library contains many new drum kits, instrument and effect racks, and loops that sound very up-to-date and modern. And some of the Packs have also been updated and offer new drum grooves, basslines, mix presets and much more.

Of course, Live 11 Intro has also been improved - instead of the somewhat restrictive number of 8 scenes, there are now 16 available. Tempo Follower has been integrated into Intro, as well as the capability to import or export video. Single track comping is possible, and the scale function is also back. New sound content and Max for Live Devices have also been added here. With this, Live 11 Intro will get new users off to a good start!

Live 11 has taken a big step forward. A special focus in this upgrade is to support the joy of playing and experimenting, as well as creative work and performing. In addition to the many enhanced possibilities, such as comping, probabilty functions and MPE support, all the way up to the tempo control, equal attention has been paid to designing everything in such a way that the program remains clear and intuitive.

The interface is still not cluttered, but has been sensibly organized where necessary, so that all functions can be called up quickly - but otherwise do not get in the way. The multitude of new options is inviting and not overwhelming; and they increase the workflow immensely. Clearly, this update to Live More Info 11 is worth discovering!