<< Back to overview
Cheap TR-606 replica with extras

The Drumatix, which serves as the obvious Blueprint of Behringer‘s drum machine, was launched together with the legendary Bassline in the early 1980s, with the TB-303 as a virtual electric bass player and the TR-606 as a drummer‘s replacement to support guitarists. Both devices initially met with little interest, but were rediscovered years later as inex- pensive second-hand devices and often used in combination for acid, techno, house and similar music styles. 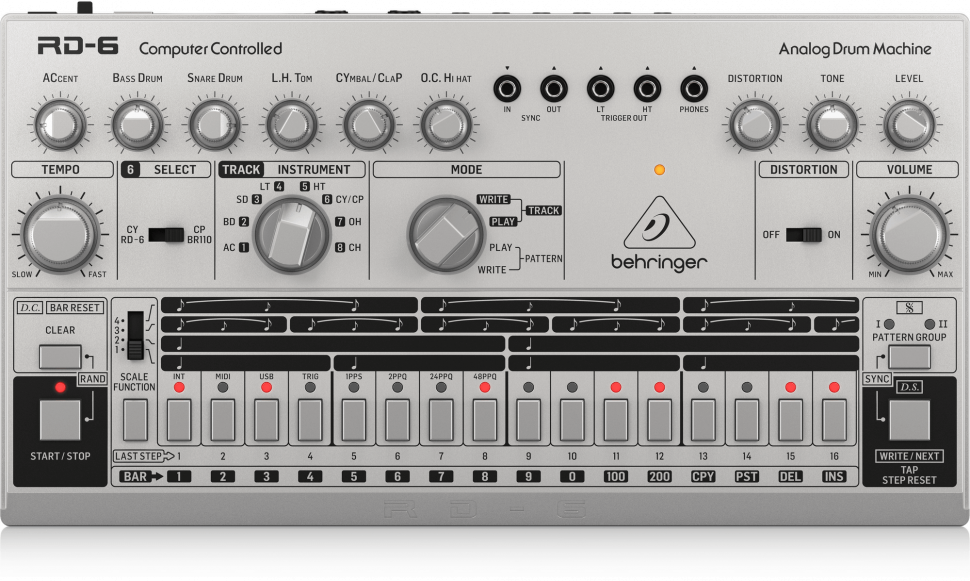 With the RD-6, Behringer beat the new edition from Roland by a few weeks. The TR-06, however, is digitally built with virtual-analog sound generation, while Behringer relies on a replica of the analog circuits of the TR-606 that is as close as possible to the original and is a good deal cheaper. On the outside, however, the price of the RD-6 is obvious. The TD-3‘s familiar and somewhat clunky looking case is made of simple plastic and weighs only 900 grams. In contrast to the original, which is also rather cheap, there is no battery operation possible with the RD-6, which would have made the unit a bit heavier and independent from an external power source. The knobs are also made of plastic, but with a pretty nice rotation resistance.

The user interface and operation is essentially the same as the original. Newly added on the top side are the sync connectors and separate trigger outputs for the two tom tracks to synchronize the built-in sequencer with other analog equipment. The RD-6 can also be synchronized to MIDI clock via a MIDI input, or you can trigger the instruments with an external controller or your DAW. The second MIDI jack sends out the sequencer‘s MIDI signals or loops incoming signals through. The USB port can also be used as a MIDI interface, but audio signals as in Roland‘s own replica TB-03 from the Boutique series are not transmitted.

Another practical addition is the new clap, inspired by Roland‘s small drummer DR-110. The Select button lets you choose between cymbal and clap, but both instruments can play at the same time. Unfortunately, the clap is too quiet compared to the cymbal, which can only be compensated for by the individual outputs due to the common volume control. Soundwise, the RD-6 as a whole is very harmonious, even if compared to the original; the fatness and organic element are a bit missing and everything seems a bit more static. While snare and kick are very close to the sound of the TR-606, hi-hat and cymbal sound a bit sharper and more obtrusive than the original. Nevertheless, the RD-6, especially in combination with the Accent function, allows you to create lively and driving analog grooves quickly and easily.

The built-in distortion thins out the bass range of the kick considerably and can accentuate the cymbals unpleasantly; with moderate use, however, it provides interesting harmonic distortions of the kick and toms. With the sequencer, you can program one-bar patterns in the proven TR-X0X manner. Thanks to various dividers and a variable last step, you can also program odd beats. Alternatively, you can use the Tap button to play the selected instrument in real time, or use the Random function for random patterns. Patterns can be chained and saved as songs, and detailed post-processing is possible via the Synthtool software.

The RD-6 is a compact drum machine with well-matched analog sounds in the style of the Roland TR-606. It sounds a bit more modern and static than the original, which can easily be compensated for via the individual outputs with appropriate post-processing. The additional Clap, as well as USB and MIDI and, of course, the very reasonable price are further advantages compared to the almost 40 year old original and the replicas from other manufacturers.