<< Back to overview
Advanced version of the popular keyboard controller!

The Keyboard in KeyStep 37 is the same as the model in KeyStep, but with 37 instead of 32 keys. The slim keys are among the mini keys with the best playing feel on the market ; touch dynamics and aftertouch are very well implemented.The LEDs above each key are new for visual feedback. This is especially useful for the new Scale function, which allows you to limit the keyboard to predefined or self-created scales, thus avoiding off-key sounds.

There are two touchstrips for modulation and pitch bending. KeyStep 37 finally has the controls that were sorely missed in the first version. Four of them are available, can be assigned four times with a total of up to 16 MIDI controllers to control (e.g. filter frequency and resonance of a connected synthesizer). 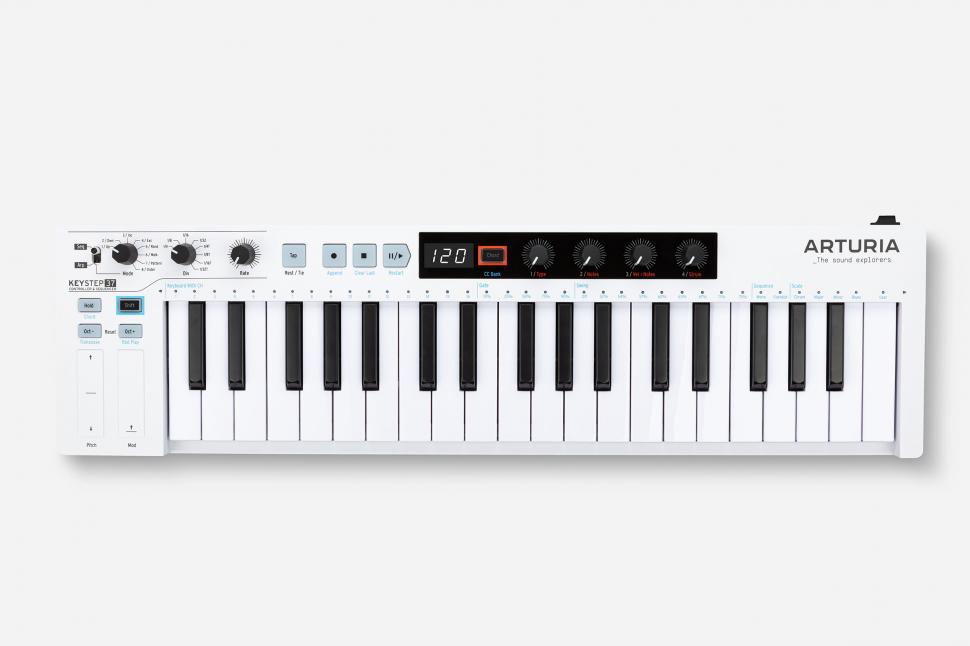 Another welcome innovation is the 3x7 segment display. Finally, step-by-step recording lets you know how long the sequence is currently playing. Also, the tempo and selected chords or sync dividers can be read out. In this context, it is also practical that you can not only transpose the polyphonic sequences with the keyboard, but also temporarily lengthen and shorten them and thus create interesting fills.

The rear panel offers the same connections as the KeyStep. In addition to a pair of MIDI jacks, there are five mini

jacks for connecting analog equipment. The CV/Gate output is complemented by a Mod output so you can play your analog treasure with the KeyStep with velocity or control the filter frequency by aftertouch or modulation strip. Sync In/ Out allows synchronization with analog drum machines. Two fiddly little switches let you control whether the tempo is set by the internal clock, the analog sync input or MIDI clock - we would have liked to have a separate button on the top for this! Power is supplied via the USB port, which is now full-size instead of Micro-USB. Alternatively, a power supply unit can be used.

A toggle switch lets you choose between arpeggiator and sequencer. Two new interesting types have been added, offe- ring different types of controlled random playback. Walk decides according to percentage graded probability whether the next, previous or the same step of the broken chord is played. Pattern, on the other hand is familiar from MicroFreak, where the played notes are randomly jumbled in selectable bar lengths and the result is then repeated. Unfortunately, the results cannot yet be converted into a storable sequence as with the MicroFreak, but must be recorded directly in the DAW; otherwise, they are lost.

There are no spectacular new features in the polyphonic sequencer - controller movements of the modulation wheel or the new knob are not recorded. This is where the KeyStep Pro with its controller track comes out on top. We also miss an internal metronome for real-time recording, although a cheap computer box or an old headphone at the analog sync output can be a stop-gap solution. In Contrast, we really liked the option of jamming over playing sequences.

The chord function was massively expanded. With the KeyStep, Chord only allowed the storage of any chord, which was then triggered and transposed via the keyboard or the arpeggiator. With the KeyStep 37, you can also choose from ready-made chords and make extensive adjustments in real-time. For example, the number of notes played can be adjusted by knob or velocity, which provides a lot of dynamics. And with the new Strum function, you can play the individual notes with a delay. The tempo of the „scramble“ is freely adjustable, but synchronization to the clock with flexible dividers for individual arpeggios is also possible.

KeyStep 37 is a successful extension of the small keyboard controller. The 37 mini keys are a good compromise between compactness and playability, the four knobs allow direct control of several parameters and the three-digit display and LEDs above the keys provide visual feedback. And the new arpeggiator options and extensive chord functions provide plenty of inspiration.