<< Back to overview
A dark chapter

Benzodiazepines and synthetic Opioids are the drugs of the hour – and Trap is their official channel. The scene sings of excesses and issues warnings about it. And in Germany, drugs like Tilidin are gaining in popularity. So far, no one has blamed the music. Unfortunately, that’s not good news. 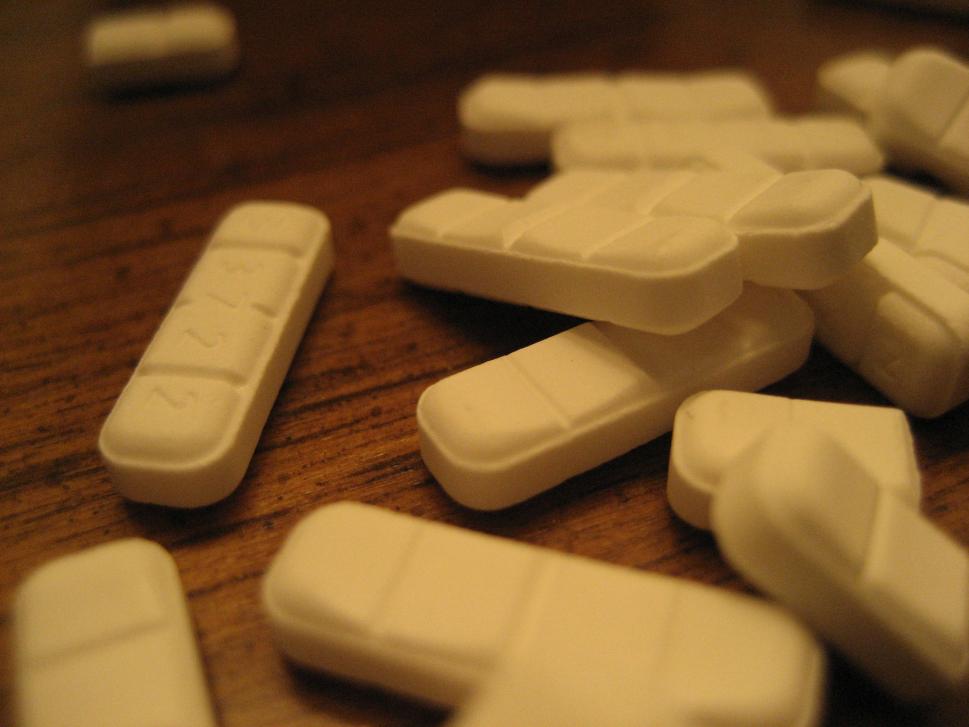 American Hip-Hop remains the measure of all things. So, German rappers not only imitate their American role models when it comes to beats, lyrics and sounds when it comes to their music; but also when it comes to the choice of their favorite drugs. A wave of substances that have long been considered the new stars in the drug sky in the USA is currently sloshing onto our shores. They are marketed under such melodious product names as Xanax, Valium, Percocet and Halcion. Although they have certainly not achieved widespread popularity in Germany, their use is increasing rapidly. The effects of these „Benzodiazepines“ have been aptly described by Capital Bra and Samra in their anthem „Tilidin“. They say: „A few drops of Tili, see the film pass me by, dear God, I feel so lonely / Give me Tilidin, yes, I could use some. The effect of Tilidin - to take away fear, to alleviate loneliness and to ease pain - is already familiar from „classical“ substances like Heroin.

And yet, this generation of drugs is different. Tilidin takes a very special path to the extent that this is a German special path. Indeed, to the extent that this is a German path. In the United States, for example, the active ingredient barely matters. In fact, however, it hardly differs from much better known products. Tilidine, unlike Xanax & and the like, is not a „Benzo“ but a synthetic Opioid; however, it is an active ingredient in the form of a „Benzoin“. It is, however, often pre- scribed by doctors for similar symptoms: panic attacks, anxiety, anxiety disorders, anxiety and pain. Even if you do not read about them in the newspaper every day, Benzos and Opioids have long since ceased to be a niche phenomenon. In the US series „Homeland“, Claire Danes plays CIA agent Carrie Mathison, who suffers from biopolar disorder and tries to control her symptoms, sometimes more, sometimes less successfully, with the Benzodiazepine Clonazepam (brand name: Klonopin). The fact that so many people were able to identify with this troubled protagonist over eight seasons speaks volumes about how much the underlying symptoms, albeit in attenuated form, have reached the mainstream.

Music as an Early Warning System

As is so often the case, it was not Hollywood but the music industry that acted as an early warning system. For more than two decades now, Hip Hop has been lyrically and practically dealing with Benzodiazepines and Opioids, reaching a huge, young audience. Samra and Capital Bra, for example, sold almost half a million copies of „Tilidin“ and landed a Triple Number 1 hit in Germany, Austria and Switzerland. Since then, at least, the substance is no longer a foreign word among young people. But the story begins in the mid-90s in Houston, Texas. DJ Screw was working on the ultimate decelerated music style called Chopped n Screwed, which is so slow and sluggish that pioneers like trip hop look like speed metal in comparison. Everything went slower in Screw‘s tracks: the beats, the down-pitched vocals, the time itself. Screw reduced the tempo of popular rap tracks, tinkered with the lyrics and arrangements, added his own raps or invited friends to the studio. As a result, he stretched his remixes up to ten hypnotic minutes. It‘s a concept that sounds crude at first, but soon draws you deeper and deeper into it, and which some believe could only have been created in Houston, a city where it‘s summer nine months of the year. But the drug culture of the city also left its mark. The scene‘s favorite drug was Lean, also known as „Purple“, a semi-liquid, semi-solid drink made from high-dose, Codeine-containing cough syrup, Sprite and candy. Lean is traditionally served in two interlocking Styrofoam cups („Double Cup“), which ensure that the sweet drink stays ice-cold longer and conveys an incredibly relaxed and mellow feeling, as if the world were dressed in absorbent cotton. Pain is hardly noticeable anymore; worries become bearable. Thus, it resembles Tilidin, which does not so much provide „euphoria“ or „relaxation“, but rather creates a kind of „offside“.

Now after each high, a crash is inevitable. In some cases, even on the same album. After their chart success with „Tilidin“, Capital Bra rapped on the track „Lieber Gott“: „I wake up in a sweat, having nightmares / Party and success, people say I‘m on a roll, but my senses are numb / „Tilidin“ is gold, but I hate this stuff / I‘ve taken it and regretted it, leave that shit alone. Also, in the current single from Bonez MC, „Tilidin Way“, the dark side of the effect palette is illuminated. In the video, Bonez and his co-dancers imitate the undead from Michael Jackson‘s „Thriller“, expressing the zombie feeling that many experience when using Tilidin. With Lean, the crash was especially painful. One of the effects of codeine is breathing trouble. Developed as a cough suppressant, the codeine lowers the heart and respiratory rates. In very high doses or in combination with substances that also lower the circulation, such as alcohol, life-threatening breathing stops can develop. Benzos ultimately have the same effect, which is why Carrie Mathison, in a dramatic epi- sode of “Homeland“, tries to kill herself with a combination of tablets and white wine. While Mathison survives on TV, real life was less merciful: DJ Screw died in 2000 from a Codeine overdose. It was a warning that no one wanted to listen to. Chopped n Screwed alone did not become a mass phenomenon, but it had a major impact on the birth of Trap, a new style of music that made the Texas underground sound suitable for the masses. It was to carry the Codeine lifes- tyle from Houston out into the world.

From Dream to Nightmare

Chopped n Screwed stood for a slightly psychedelic and dreamy world view. When I talked with the pioneer DJ Cam in Paris almost ten years ago about this music, which was very close to his heart, he told me laughingly that his mother loved some DJ crew tracks because they were so peaceful and beautiful - of course without understanding the lyrics overloaded with „Bitches“ and „Hoes“. In Trap, on the other hand, the comforting looseness turned into a nightmare of sound. One of the greatest hits of the genre, Futures „Mask Off“, turned into a blueprint: a slow-motion flute sample, bass tremors weighing tons, tiredly rattling hi-hats and, above them, Futures strangely uninvolved voice created a picture of an apocalyptic underworld. Appropriately, the chorus consisted mainly of the words „Molly Percocet“, which stands for the combination of MDMA (also known as „Molly“) and the Benzo Percocet. Autotune, consistently used in every line of text, further reinforced the element of dehumanization. „Mask Off“ and the accompanying album hit the nerve of the time - which helped the message reach a mass audience. Soon, swallowing Benzos and Opioids at parties became a standard ritual, and an entire generation of rappers flirted with what podcaster Nadira from the YouTube channel „Die Schnibis“ called the „trap lifestyle“ and „the beauty of the broken“.

Only a few could escape its beauty. But it was not as glamorous as in the heyday of cocaine and heroin. The use of Benzos was downright playful. It was honest and unembellished - nothing was covered up or hidden backstage. In one of his most famous videos, the once great Trap Hope, Lil Peep, shook pills directly from the bottle into his mouth - as if they were Smarties. Some of his colleagues, like Lil Xan (Xanax) or Joey Purp (an allusion to the purple color of Lean) named themselves after their favorite Benzos. Only once did Peep grant his listeners a glimpse of the darkness behind the mask. „I need help“ he wrote shortly after swallowing a frighteningly high dose of Alprazolam and Fentanyl. A few hours later he was dead. Just one year later he was followed by Mac Miller, perhaps the most prominent Benzo opera with five top five albums in just over a decade. They wouldn‘t be the only ones. The list of those who died from overdoses is long and continues to this day. And even though Future has publicly declared that he no longer glorifies drugs in his songs after the increasing number of young people struggling with Opioid addiction, he remains the exception. The curse of tranquilizers doesn‘t seem to want to end.

Benzos Do What They Should Do

Admittedly, there is a simple reason for this, which Vic Mensa summarizes in the documentary „Bars“ that specifically deals with the consequences of Benzo abuse (the word „bars“ is a play on words that refers both to the blocks of text in rap called „bars“ and to the shape of Xanax tablets that resemble a bar of (chocolate) as fol- lows: „The drugs do what they were designed to do: They dull you and they make you addicted.“ And it is precisely this dullness that many are currently seeking. The number of young people with anxiety disorders is increasing at an alarming rate in Germany; and in the USA, 20% of the population is struggling with chronic pain. When in doubt, people prefer Xanax to a life of fear and pain. So, when the addiction help center or the authorities warn that many young people do not understand the difference between drugs and medication, there is a simple reason for this: there is no difference at all. Ultimately, users prescribe themselves the exact substance that will most effectively relieve their anxiety and pain. As a result, they are consequently afflicted by the very symptoms that plague „real“ patients: addiction, increasing tolerance and, in some cases, an increase in the occurrence of the very symptoms that led them to start using the drug.

It is noteworthy that, even in the USA, where music is often blamed for all the ills of the world, no voice has been heard calling for sanctions against the Trap scene. Instead, the pharmaceutical companies have to justify themselves for having developed potentially addictive drugs and for having circulated them all too freely. If the plaintiffs are successful, this will have an impact on the entire pharmaceutical industry. This is good news for those whose lives have been, and will continue to be, destroyed by their dependence on Benzos or Opioids. But behind this is also a sad insight: It would be nice to believe that we can cast out our demons just by listening to and producing music, that music actually has a healing power. It seems that nobody wants to rely on that anymore.