<< Back to overview
Arturia audio interface with more connection options

Arturia continues to expand its line of audio interfaces with the compact yet feature-packed AudioFuse Studio for the desktop. Using the digital connections, AudioFuse Studio provides a total of 18 inputs and 20 outputs, which should be sufficient for semi-professional studios. The interface is packed into a robust metal housing with the compact dimensions of 26 x 16 x 7 centimeter. 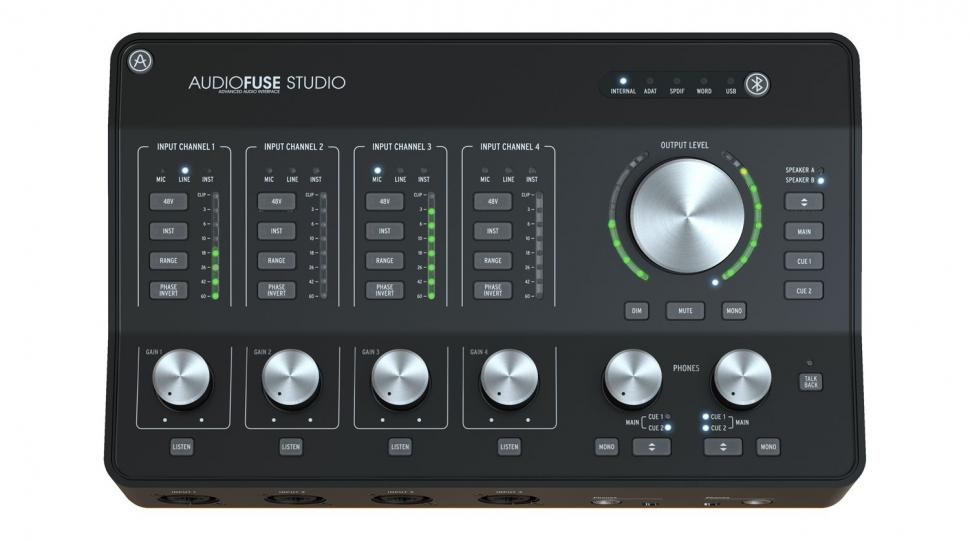 The surface is equipped with seven silver controls for adjusting the input level of the first four analog inputs as well as the speaker and headphone outputs. The knobs are large and offer a comfortable turning resistance. In addition to a gain control, each of the four combi inputs for microphone, instrument or line signal has an eight-digit LED display for level indication, individually switchable phantom power, pad/boost switch and phase inversion for recording with several microphones.

The extensive monitor section makes an additional monitor controller redundant. Separate buttons for switching between two pairs of speakers as well as main and cue mixes, dim, mute, mono and even talkback complete the large gridded volume control with two LED displays. The four audio inputs are placed on the front panel as XLR/jack combo jacks for quick connection of a microphone or instrument, just like the two headphone outputs. As a special feature, a bluetooth receiver with aptX and AAC, is integrated to be able to link up with a smartphone easily. This also works in standalone mode; AudioFuse Studio can be used as a flexible digital mixer without a computer.

Four additional analog inputs allow you to connect line signals, input pair 5/6 is additionally designed as a phono input for direct connection of turntables. Four insert jacks allow you to insert a compressor or limiter directly into the microphone channels, thus preventing clipping before the converter.

On the output side there are four TRS jack sockets for connecting two pairs of speakers. In addition, there are two aux outputs which can also be used for reamping guitars. In addition to input and output for word clock synchronization, there are also two pairs of ADAT. In combination with suitable converters, this gives you eight additional inputs and outputs, while the second connection allows a bandwidth of up to 96 kHz.

Shortly, the connection to the computer is made via USB-C, two high-quality cables to USB-C or USB-A are included. The AD/DA conversion offers 24-bit at a maximum of 192kHz. The AudioFuse drivers are multi-client capable and ran stable in the test. The latency was in the average range of a USB interface and was comparable to the Focusrite 18i20. Regarding to this RME's interfaces with the specially designed USB chip, as well as Thunderbolt interfaces, are still a few milliseconds ahead. The power supply is provided by an external power supply unit. A MIDI pair (adapter included) and also a triple USB hub with charging possibility for other USB devices complete the successful equipment.

Arturia's DiscretePro preamplifiers, specially designed for AudioFuse, provide a warm and round sound in the style of old analog preamps, which we already liked in other models of the AudioFuse series. However, since personal taste is the key, so the most important factor here and some producers prefer a rational sound for more options for post-production, we recommend testing before purchase.

The uncomplicated configuration software fulfilled its purpose in the test without any problems. Worth mentioning is the Creative Suite included in the package, which provides a selection of Arturia software effects such as virtual preamps, compressor, delay and reverb, as well as the Analog Lab Lite instrument collection. These can be for example electric and acoustic pianos, analogue and digital synthesizers, mythic organs and string machines. In total, Analogue Lablite contains 21 keyboards and 550 pre installed presets.

Despite the compact format, AudioFuse Studio is the most comprehensive interface in the series so far. Eight analog inputs, an extensive monitor section, digital connections, MIDI, bluetooth and USB-hub leave hardly any wish unfulfilled, especially since AudioFuse Studio can be used as a digital mixer without a computer. Combined with the very good and low-noise sound of the preamplifiers and converters and the direct handling, AudioFuse Studio is recommended as a central control center for both the ambitious home studio and the semi-professional project studio.