<< Back to overview
A mixer for all situations

Compared to Model 24 and Model 16, Model 12 is significantly more compact and less expensive. Savings were made primarily on the channels, making Model 12 (Checkout Model 12 in the Thomann shop) the perfect solution for desktop studios, rehearsal rooms or live gigs. Model 12 offers 10 analog inputs, divided into 8 tracks. All tracks are fed via XLR/jack combo jacks, the last two channels each have an additional jack for stereo signals and the first two channels have an insert connector for compressor, limiter or noise gate. All channels offer a switchable Hi-Z function for low-level signals like electric guitars. Phantom power can only be activated globally. 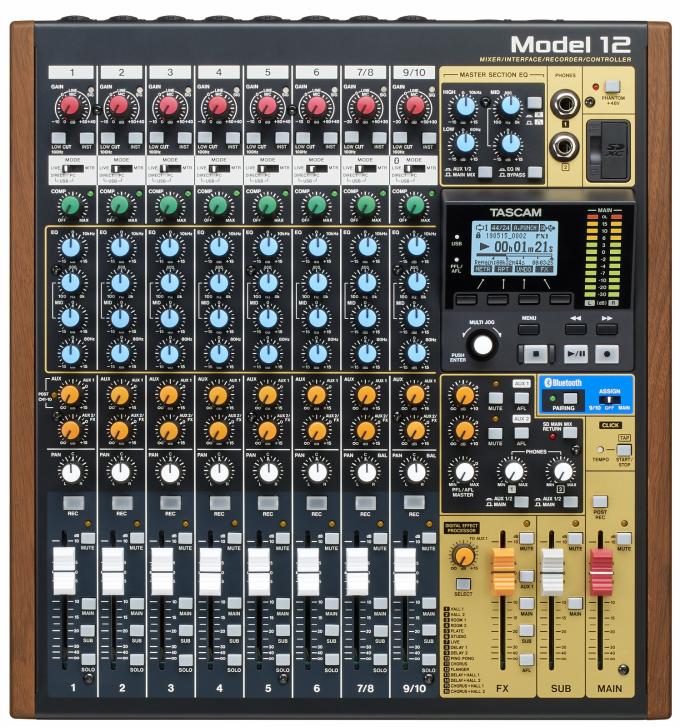 Each channel has an input volume control and a low-cut filter. The Mode switch determines which input source is used: an instrument/microphone connected to the input jack, a track from the builtin audio recorder, or an audio channel from the computer/DAW, connected to via USB port. The stereo channel 9/10 can be supplied with audio signals from a smartphone or tablet via Bluetooth. Another control adjusts the threshold of the built-in compressor, a 3-band EQ with adjustable center frequency is used for equalization. Two aux controls follow, and the channel strip is rounded off by a smooth gliding 60mm volume fader. In the fader area, there are 5 buttons to activate the recording and pre-fader monitoring. The input signal can be muted or routed to the stereo sum or the subgroup.

The master section with volume faders for the subgroup, the stereo output and the built-in effects processor can be found on the right. The subgroup allows, for example, all channels of a drum set to be controlled by a single fader. With the help of the two aux channels and two separately adjustable headphone outputs, individual monitor mixes can be created. A 3-band EQ with adjustable center frequency and Q factor is used to quickly adapt the sound image to the PA and the room. The small display and the transport buttons are located underneath. The built-in effects unit offers 16 different reverb, delay and modulation effects and can be used in all input channels, but can only generate one effect at a time. As an alternative, an effect path for an external effect device is available.

Tascam‘s Model 12 can be used as a mixing console, recorder and audio interface, and despite its extensive functions, operation is straightforward. For each channel you can individually select whether the input signal is fed in from the physical connections, the audio recorder or the computer connected via USB. You can also listen to the internally recorded signal via the channel and, after pressing the Rec button, record an instrument on the channel (punch in/out) or add a voice as an overdub. Each channel is recorded directly into the Model 12, requiring only an SD card. Alternatively, or in parallel if required, multi-track recording in the DAW via USB is possible, with a maximum resolution of 24bit/48kHz. The display always shows all channels at the same time or checking purposes or offers a time display. Conveniently, markers can now be set (e.g. verse, chorus, bridge), a feature that was initially missing on the older models. In terms of sound, the Model 12 proved to be unobtrusive in a positive sense in practical tests. The microphone preamplifiers were able to handle both low-level signals and very loud input signals and the sound of the recordings was transparent and powerful.

Model 12 (For more informations visit the Thomann shop) already cuts a fine figure as a mixing console with 8 microphone inputs, a one-knob compressor on all channels and a built-in effects unit. But its strength is without doubt its versatility: The audio recorder allows multi-channel recordings in the rehearsal room or on stage, so that there‘s no need for a computer. Projects from the DAW can be transferred to the mixer in multiple tracks and used as a live playback or supplemented with instrument or vocal recordings. In the desktop studio, the USB audio interface is a convenient tool for multi-channel recording in the DAW, and Model 12 can easily be used as a DAW controller. All functions can be combined, so the price is very good for the features offered.