<< Back to overview
Sequential Pro-One clone with extras

The Pro-One has characterized numerous songs, from synthpop hits like Yazoo's "Don't go" to the early works of industrial legend Skinny Puppy. But the good sound was accompanied by a rather bad processing of the original. The consequence of this is that despite the high sales figures at that time, only a few fully functional copies are still available on the market today and in addition to the not exactly inexpensive second-hand price, future maintenance and repair costs should also be taken into account. Because of this situation Behringer wants to take remedial action with the original replica called Pro.

The main difference to the original, apart from a general reduction of the user interface and elements, is the missing keyboard. This way, the Pro-1 (Buy in the Thomann shop) can be placed on the desktop or built into a Eurorack in a space-saving way, what makes sense due to the CV-connections that are extended compared to the Pro-One. When it comes to haptic, the original and the clone challenge each other in almost every aspect, and here we liked the K-2 with its robust metal case better. However, the controls on the Pro-1 appear more reliable than the wobbly candidates of the Pro-One.

Due to the Eurorack installation option, all audio inputs and outputs as well as the MIDI input are accessible from the front panel. For desktop operation there is also a USB port for USB-MIDI on the rear panel. The Pro-1 is class compliant, so it is immediately recognised by the computer without driver installation. There is also a MIDI-Thru jack as well as four DIP switches for setting the MIDI channel on which the Pro-1 should receive the signal. This leaves the additional audio output in the form of a 6.3mm jack plug and the connection for the external power supply. 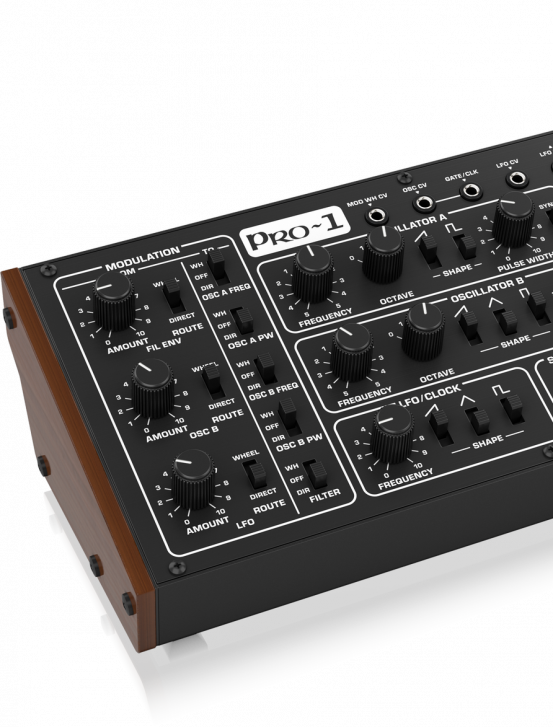 The sound generation was taken over identically from the original. Two oscillators provide the waveforms square and sawtooth, the pulse width can be modulated. Oscillator 2 offers an additional triangle wave. As a special feature, several waveforms can be activated simultaneously for mixed forms. Oscillator 1 can be hard-synced, the very good sounding sync sounds when modulating the pitch of the slave oscillator are a trademark of the Pro-One and one of the highlights of the Behringer clone. Oscillator 2 can also be used as a second LFO. With Pro 1, both oscillators can be controlled separately in pitch for duophonic playing, a useful feature compared to the original!

Mixed with white noise or an external audio signal, the oscillators move into the 24dB low pass filter, for whose modulation an ADSR envelope is available. A second envelope is responsible for the volume progression.

While oscillators and filters are hardly distinguishable from the original in terms of sound, there are certain limitations with the envelopes. Although they feel as fast as in the original, you can hear a rough grid in certain areas.

This is probably due to the fact that Behringer, as in Crave, has used digital envelopes and not analog ones. Especially in the sensitive lower attack range the audible stepping can be disturbing.

The sequencer with its 64 steps was also taken from the original. It has a very simple structure, but by varying the external trigger signal you can also create exciting grooves. If you don't know the Pro-One, the modulation section on the left will confuse you when you see it for the first time. But once you understand the concept, you can enjoy modulation possibilities that were relatively complex for that time, including FM, which also sound very musical and organic.

The only catch: To take full advantage of the options, a modulation wheel or equivalent control voltage must be connected.

It's amazing how close the affordable and compact replica of the Sequential Pro-One comes to the original in terms of sound quality. Even long-time users of the Pro-One will have difficulties in the blind test to distinguish the vintage classic from its clone.

Duophony, additional patch sockets and MIDI/USB also speak for the Pro 1. Only the digital envelopes have to be slightly reduced, but in most situations this is no problem.

If you are looking for a flexible synthesizer with a lot of cult factor, which masters almost all classic analog sounds in perfection like no other, the Pro 1 (Checkout Pro1 in the Thomann shop) is the right choice.