<< Back to overview
Paraphonic analog synthesizer with four oscillators

Moog Matriarch is the new flagship of the Mother Series, previously consisting of the Mother-32 and Drummer From Another Mother (DFAM), Eurorack-compatible desktop devices and the Grandmother. With quadruple paraphony, it joins the ranks of the monophonic Grandmother and the duophonic Subsequent and the polyphonic Moog One. 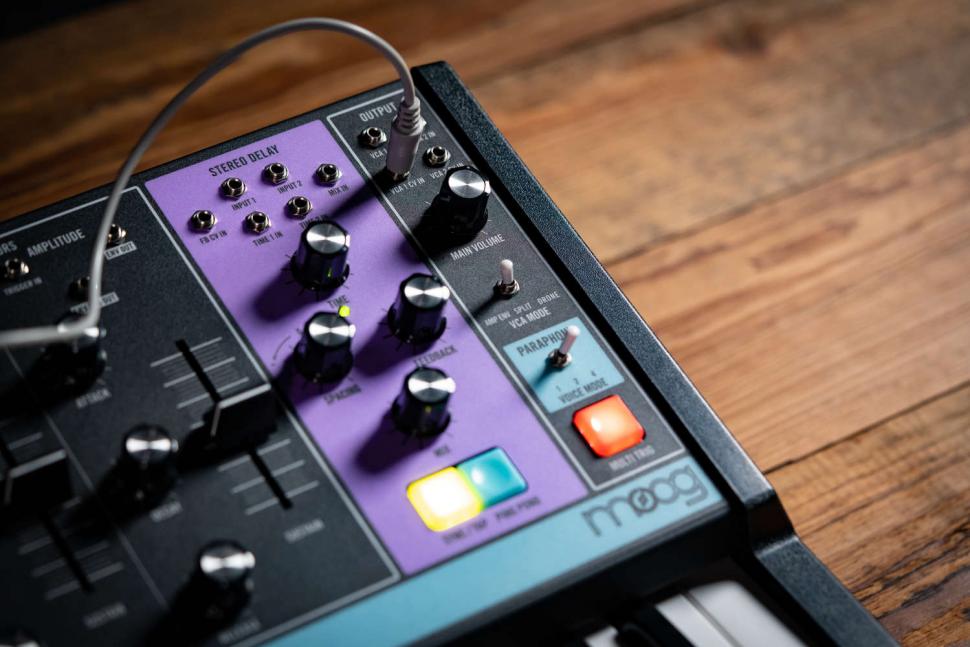 With its slightly slanted user interface, typical Moog controls and narrow white pitch and mod wheels, the handcrafted Matriarch is inspired by old Moog classics such as Prodigy and Rogue, and the pastel colours add a nice touch of 70s flair to the design. This colour scheme has already established itself with the Grandmother, as it clearly separates the individual modules of the sound generation. The finishing is excellent, the synthesizer is very robust and with its 11 kilograms also quite heavy.

As with the other synthesizers of the Mother series, the Matriarch's sound generation is uncompromisingly analog; there are no menus or sound memories. You get a modular system with a keyboard, similar to the legendary modules of the 9xx series, where the most important connections for direct playing without patching are already pre-wired. 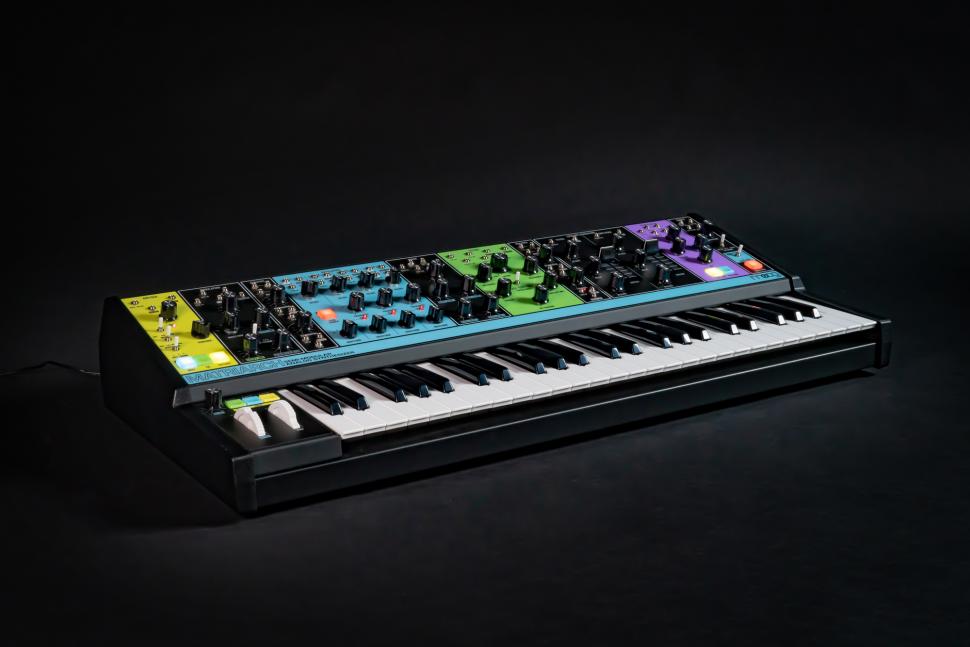 The keyboard covers a full four octaves, 17 keys more than the Grandmother version. The keyboard was developed by Fatar. It is lightly weighted, can be played comfortably and processes velocity and aftertouch. We had missed these features on the Grandmother. Velocity and aftertouch are not assigned to specific parameters, but can be routed to any parameter with a modulation input via patch cable. And there is a lot of that in the Matriarch! On the left side, you can find the playing aids in form of two wheels, three buttons for transposing the keyboard and programming the sequencer as well as a controller for Glide. This is equivalent to the feature-set of the Grandmother.

On the rear panel, you will find the audio output, which is in stereo because of the built-in delay effect. And not to forget the headphone output with its own volume control. The instrument input lets you send external audio signals through the Moog filter and delay. There is an optional mini-jack output for connection to a Eurorack system. There is also a separate stereo output for the delay to use the effect separately. In addition, the delay time can be synced via analog clock and the feedback can be modulated via CV.

Inputs for sustain and expression pedal are available as well as CV outputs for keyboard and wheel. There are also four CV connectors to start and reset the matrix sequencer and send/receive analog clock signals. Matriarch (Checkout in the Thomann shop) processes MIDI signals via the MIDI trio or the USB port. However, knob movements are neither sent nor received because the knobs are not digitally sampled. Power is supplied by an external power supply.

Compared to the Grandmother, the number of oscillators has doubled. So it features opulent four oscillators, which are basically designed identically. Each oscillator offers triangle, sawtooth, square and narrow pulse wave as waveforms and is adjustable between octave position 4' to 16'. Oscillators 2, 3 and 4 can be detuned for wide, fat sounds, reminiscent of the iconic Minimoog. They can also be hard-synced with oscillator 1, and this function can be activated individually for each of the three oscillators. This allows for exciting and unusual sounds, especially in paraphonic mode.In contrast to a polyphonic synthesizer, a paraphonic synthesizer can also be played polyphonically, but without having a filter and amp per voice.

The oscillators are mixed together in the mixer module, another knob controls the volume of the noise generator or of the external audio signal, in case a cable is connected.

The four input sockets can also be used to disconnect the pre-wiring and feed other signals into the mixer. For example, you can return the filter output to the noise input. The noise knob can then be used to control the feedback loop for slight saturation, harmonic distortion and even complete destruction, as with the Minimoog. This can result in a warm, rich sound.

From the mixer, the signal is transmitted to the filter module, and this is where we find another important difference to the Grandmother: Like the Moog Voyager, Matriarch offers not only one but two filters for subtractive processing of the oscillators. Both filters work as a low-pass, and the first filter can also be used as high-pass. The routing can be set between parallel (high-pass/ low-pass), serial (high-pass/low-pass) or stereo (low-pass/ low-pass). There is only one cutoff control, but with the spacing knob, the frequencies can be shifted against each other to create interesting stereo effects. The outputs of both filters can also be send out separately via patch jacks and inserted again at another point in the signal path. There are almost no limits to your imagination. And the filters sound outstanding, typical for Moog.

On the Grandmother we missed a second ADSR envelope, so we‘re quite happy about the improvements Moog made on the Matriarch version. Just like on the Grandmother synthesizer, attack, decay and release times of both envelopes are adjusted by knobs. Sustain, on the other hand, is controlled with a long fader, which is still a bit too smooth-running for our taste. The progression of the envelope can be set positively or negatively via two patch sockets and the module also has a trigger input.

The synthesizer features two amplifiers, otherwise the stereo effect of the dual filter would go unheard. Both VCA can either be modulated together by the AMP envelope, controlled separately from the AMP and filter envelopes (split) or completely decoupled from the built-in envelopes (drone).

Four fully featured oscillators, which can be linked together via sync or FM, enable polyphonic playing, chords and arpeggios with tonal results that are hardly possible with conventional polyphonic synthesizers. This is especially true if you tune the four oscillators differently and/or choose different waveforms. There was a good reason why the similarly constructed DSI Pro2 has found many enthusiasts.

The spring reverb of the Grandmother was replaced by an analog stereo delay. Two BBD-based delay units are adjusted in time and feedback with common controls. As with the filter, a spacing parameter shifts the delay times against each other and creates interesting stereo effects. The tempo can be tapped and synchronized to internal (e.g. arp/sequencer) or external clock (analog or MIDI), the maximum delay time is 700 milliseconds. For chorus and flanging effects, the delay time can be modulated via CV, just like the feedback. External audio signals, for example from guitars, basses or other synths, can be fed into the delay via two separate sockets. In combination with the two individual outputs on the rear panel, you can thus use the delay as a stand-alone effect unit independent of the sound generation. The Mix knob, which controls the ratio between the Matriarchal sound generation and the effect, is then disabled.

The LFO can be used not only as a modulator but also as an additional oscillator. The reason for this is its wide speed range from 0.07Hz up to 1.3kHz. This means nothing else than that its able to reach far into the audible frequency range. The LFO features six waveforms, two more than the Grandmother and can modulate the pitch of all oscillators (alternatively pairs 1/3 or 2/4), the filter frequency or the pulse width. Thanks to semi-modular design of the synthesizer, the waveform output can also be used to modulate other sound parameters that have their own input. The LFO can be synchronized to an external clock. The speed can also be modulated and connected to the pitch. The modulation module also has a sample & hold generator for random value changes and a noise generator. 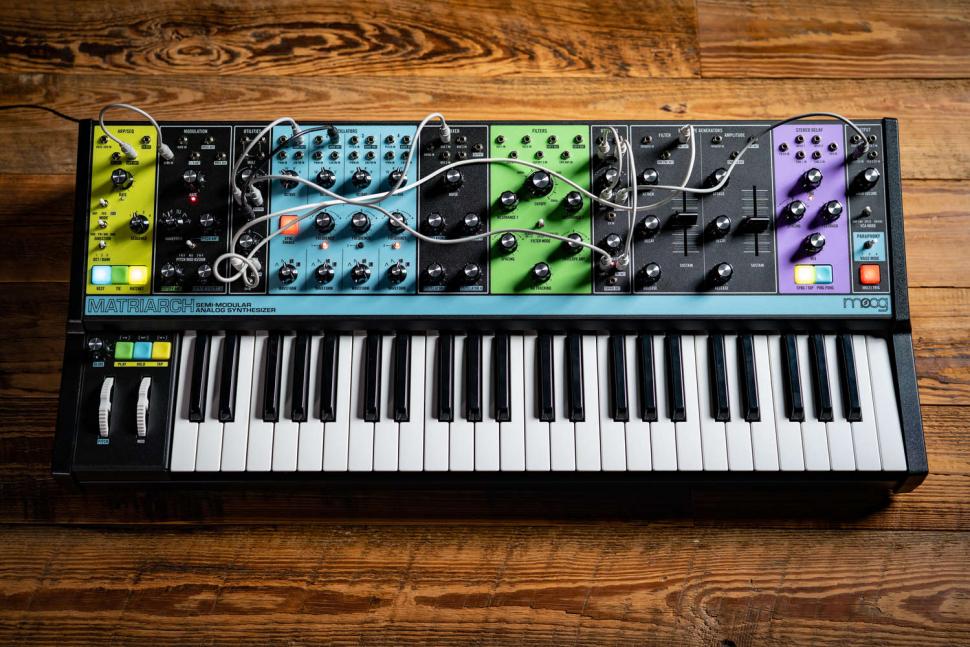 To support the modular possibilities, Matriarch also contains a utility module. It provides a four-socket multiplier that allows you to split an incoming signal such as the LFO between multiple modulation destinations. You can also use it to mix multiple audio signals or control voltages to one output. Use the Attenuator to attenuate or invert incoming control voltages. For example, if you use the envelope for cutting sync sounds to modulate the pitch of oscillator 2, use the Attenuator control or any CV source to adjust the amount of modulation. Unlike the Grandmother, Matriarch has two such "attenuators".

Arpeggiator and step sequencer were taken over from the Grandmother, but instead of three, twelve sequences can be saved. In addition, each of the up to 256 steps of a sequence can hold up to four notes in the Matriarch. In paraphonic mode, chords can also be recorded. The handling is very easy: All you have to do is set the switch to rec and then play the desired notes using the keyboard. With three buttons, you can program pauses, tied notes/slides and accents. Programmed sequences are triggered and transposed via the keyboard when the sequencer is activated. A running sequence can also be changed in real time in the above mentioned parameters, an interesting variant for live performances. The ARP/SEQ module also has a CV/Gate output for controlling other analog hardware via the keyboard or the arpeggiator.

The strengths of the Matriarch are, typical for Moog, smooth leads, rich basses and biting sync sounds. Due to the patch possibilities, analog percussion and experimental sounds are also possible. However, paraphony and the dual design also allow interesting chords, pads and arpeggios. In addition, there is the very good sounding analog stereo delay, which can also be used separately from the sound generation for external devices.

Typically Moog: Very high-quality, but also very expensive. The Behringer Poly D, which also offers classic Moog sound with four oscillators and paraphony, costs just a third of it. However, the sound generation of the Poly D is much more restricted and the semi-modular construction is missing. The sound of the Vermona Perfourmer also goes in the direction of the Moog, but offers four complete voices and can therefore be played really polyphonic if required. Otherwise its sound generation is more limited than that of the Matriarch.

The new Sequential Pro3 with its three-part paraphony and ladder filter is also a very interesting alternative. In terms of sound, it does not quite reach the depth and fullness of Matriarch, but instead the hybrid synthesizer features a patch memory and sophisticated modulation options including a multi-track sequencer.

Matriarch (Checkout Moog Matriarch in the Thomann shop) offers the same uncompromising oldschool analog sound as the other synthesizers in Moog's Mother Series. The synthesizer can sound elegant and creamy, but also robust and raw. By doubling important elements of the sound generation (oscillators, filters, VCA, envelopes) as well as paraphony and stereo delay, the possibilities have been multiplied even more, compared to the Grandmother. Wide stereo pads and constantly changing arpeggios are just as possible as unique chords and polyphonic sequences. And the modular structure replaces or supplements a modular system. Packaged in a stylish and robust case, the Matriarch is an instrument you will enjoy for a long time, which justifies the relatively high purchase price.