<< Back to overview
Well equipped

MEGAfm is a 12-voice FM synthesizer whose sound synthesis is based on the YM2612 chips from the legendary Sega Megadrive/Genesis game console.

Frequency Modulation (FM) synthesis has a reputation for being unmanage- able, which is mainly due to the large number of parameters, the complex combinations of oscillators (or operators) and the often drastic and unpredictable changes in sound even with small changes in values. Yet FM synthesizer manufacturers have never made much effort to make FM synthesis more manageable. The DX7 and its variants had to make do with two rows of buttons and a single data fader. With the macro controls on the Yamaha DX200, there was a first step in the right direction, but that was probably too early and the world of musicians was not yet ready for an FM revival. Recently, however, resourceful third party and boutique manufacturers have been trying to make this potent synthesis form popular again, for example, with a lavish controller in the form of the Yamaha Reface DX or small desktop synthesizers like the PreenFM. And Elektron‘s innovative Swedes are also showing new approaches to FM-based synthesis with their Digitone and Model:Cycles.

It‘s not surprising that now Twisted Electrons has contributed an interesting FM synthesizer. The French are, after all, known for integrating chips from old home computers and game consoles into their synthesizers. Many of these old chips used FM synthesis to create sounds and soundtracks. In fact, MEGAfm (Checkout in the Thomann shop) incorporates two Yamaha YM2612 chips that are well known from the Sega Megadrive/Genesis game consoles with internal low-resolution converters that provide their basic sound aesthetic. Crystal-clear sounds with lightning-fast resolution are reserved for modern FM synthesizers like the Yamaha Montage and Reface DX, while MEGAfm covers the rough-and- tumble side. 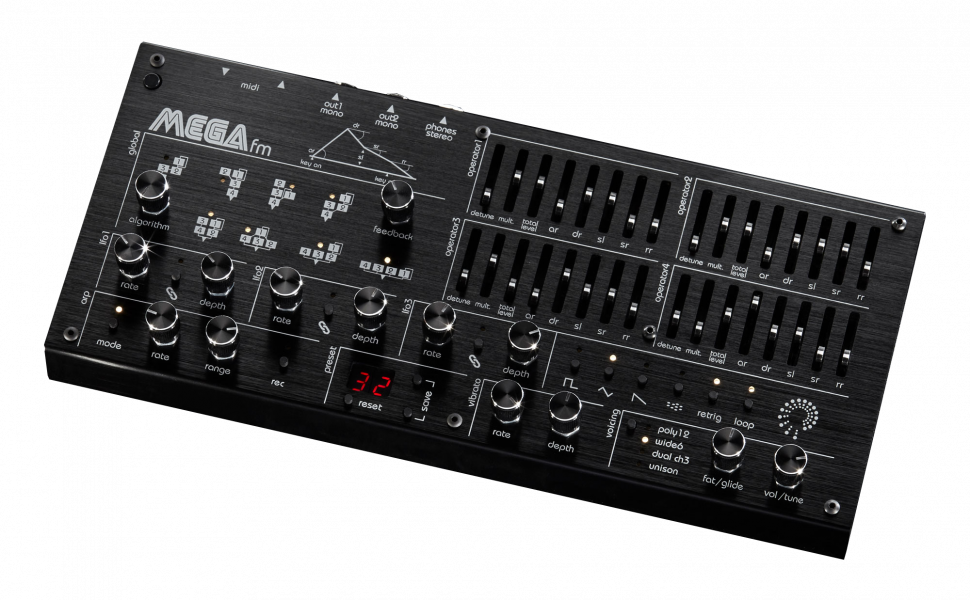 The MEGAfm is smaller than we expected from the photos. With dimensions of 30 x 13 x 5 cm, this compact synthesizer fits on every desktop and in every gig bag. The black housing, made of brushed/anodized aluminum, looks chic and stylish; and with a weight of 1.5 kg, it sits solidly on the table. Fourteen round grooved metal potentiometers are firmly attached to the housing and allow precise adjustments and a good feel.

The 32(!) faders are unavoidably a bit smaller, but offer pleasant resistance and are still quite easy to operate...at least with normal-sized hands. We also like the feel of the fifteen buttons which have a clearly perceptible click and the clearly visible status indicators with LEDs for each button. All in all, we can confirm that MEGAfm is perfectly suited for the stage.

All connections are located on the rear panel. This is where you connect the supplied external power supply. Two mono jack outputs are provided for the audio signal; next to them is the stereo headphone output. This small synthesizer is controlled via a full DIN-sized MIDI input. The other MIDI jack can be used to pass on signals (THRU) or as an output. The latter is especially interesting because all

knobs and faders send MIDI controllers, so the MEGAfm can be completely auto- mated in the DAW and can also be used as a controller for plug-ins!

Since the MEGAfm contains two chips with 6 voices each, this small synth has a total of 12 voices. The synth engine offers four operators, which can be linked by eight given algorithms. The FM grandfather DX7 has 6 operators and 32 algorithms and, therefore, allows more complex sounds. The advantage of the limitation to four operators, however, is that the whole thing is clearer and easier to control. Yamaha released 4OP synthesizers early on with the DX21, FB01 and TX81Z (keyword: Lately Bass) - even the newer Reface DX manages with this number of operators. Since each operator can be a sound generator or modulator depending on the selected algorithm and has its own envelope, the sonic possibilities are still very extensive even in 4OP synths.

In the upper left corner of MEGAfm, you can choose from the eight available algorithms. Like almost everything else in the MEGAfm, this is done without detours and with a dedicated controller. All algorithms are printed in large letters on the case and have their own LED, so you can immediately see which algorithm is currently selected. With another potentiometer, you can control the feedback (i.e. the strength with which Operator 1 is frequency modulated with itself ). 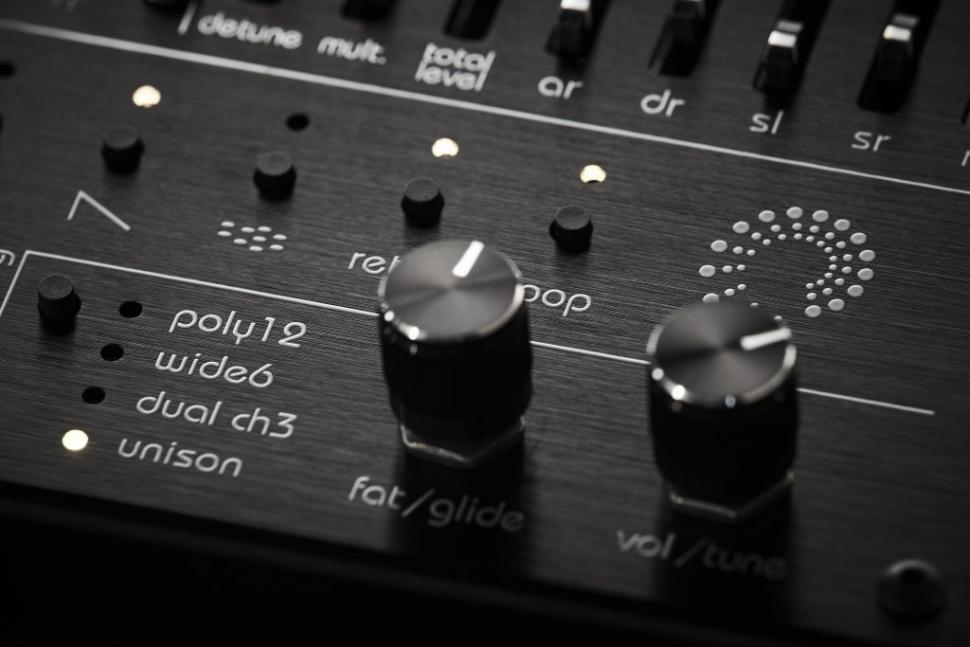 Each operator can be adjusted via eight faders. The multiplier, which is the frequency-ratio in comparison to the other operators, is important. With this, you can set the crossover between low bass and high lead, harmonic-beautiful or metallic-beautiful. A Detune fader is responsible for fine adjustments. The volume control also has a more essential function than in classic subtractive synthesizers as it determines the amount of frequency modulation - depending on the selected function of the Operator. For dynamic progressions, each Operator has an ADSSR envelope for the volume or modulation progression. Compared to a classic ADSR envelope, this has been extended with a sustain release phase for drones and modulating pads. It should be noted, however, that changes in the curve only have an effect on the next note played, and the processor-induced low resolution can lead to audible stepping for many parameters.

This direct access to all the important sound-generating parameters of all Operators simultaneously is a novelty in the field of FM synthesizers and invites you to experiment and try it out.

But the developers of the MEGAfm were not satisfied with that, so they extended the concept by adding three LFOs. And these low frequency oscillators are really something special. You can choose between rectangle, triangle, sawtooth and noise/random waveforms, all of which have their own selection buttons and LEDs to match the overall concept. So, you can immediately see which waveform is currently selected. Random can be limited to a limited number of random values, which are repeated over and over again and can then be used as a kind of step sequencer. Thanks to the Retrigger button and the Loop function that can be switched off, each LFO can also be used as a mini envelope and the tempo can be synchronized to MIDI clock. Speed and Mod Depth can be set independently and can be modulated by another LFO, which reminds us of the possibilities of a large modular system.

Each LFO can be assigned to any knob and any fader; multiple LFOs can even modulate one parameter simultaneously. One press of the Chain button is sufficient and the LFO is assigned to the last moved fader or pot. If you‘ve lost track of the LFO, a long press on the respective button deletes

all assignments to the corresponding LFO. The modulation depth of an LFO can be controlled by velocity, modulation wheel or aftertouch. It‘s not possible to modulate a parameter directly with velocity; an LFO must always be sacrificed for this. In our opinion, this is a somewhat unfortunate solution, since FM synthesis benefits greatly from dynamic playing.

In addition to the three LFOs, there is another LFO that is solely responsible for pitch modulation (vibrato) and can also be synchronized to the clock.

The lower area is reserved for the global settings. In the Voicing area, you select how the maximum of twelve voices or the two chips are to be distributed. Both chips can output their voices together on one mono output or separately on both mono outputs for exciting stereo effects. With 12-voice polyphony, the voices are played back alternately left and right. In 6-voice wide mode, each voice is played by both chips simultaneously, the detuning between the chips can be adjusted with the Fat button. This allows you to quickly create wide walls of sound. The Fat knob basically works in any mode and detunes up to 1 semitone or even up to an octave! 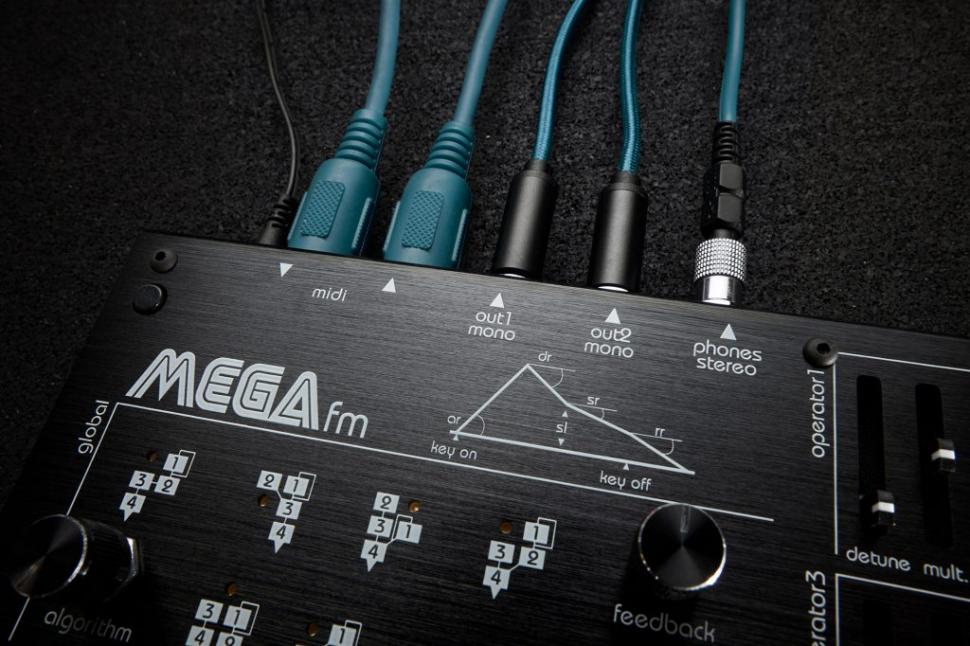 Dual ch3 takes advantage of a special feature of the chip. In this mode, you set the frequencies of the Operators freely and not in relation to each other. This leads to very weird, disharmonic results and is especially interesting for percussion and effect sounds. Unison layering of all 12 voices to a monophonic sound, which can be tuned to a mega-wide chord with the Fat control, is perfect for cinematic trailers. As a secondary function, the slider can be used to adjust glide (i.e. the smooth gliding from one pitch to the next).

There is even a practical performance aid - in the form of an arpeggiator/step sequencer - built into the MEGAfm. Five playing directions are selectable: up, down, up-down in loop, and two random modes that either scramble the played notes or play completely random notes. After pressing the Record button, you can enter up to 16 notes (including rests) step-by-step via MIDI and then play them back. Arp and sequencer can be synchronized to the clock. In the second sequencer mode, the sequence moves one step further with each keystroke allowing you to create your own rhythm.

You can save your own sounds in up to 600 storage locations, so there‘s plenty of room for your creations. This is where the 2-digit 7-segment display reaches its limitsan; you have to include the LFO waveform buttons. This is a bit fiddly because there were originally only 99 memory locations planned, but we gladly accept this little issue in order to get the many additional memory locations.

It‘s Not Pretty, but it has Character

Flexible synthesis, extensive modulation options and direct access to all parameters - that sounds almost too good to be true. And indeed, the practical test initially revealed some disappointment because, unlike a subtractive analog synth like the Minimoog, an FM synth is not a sweet-spot synth. If you simply screw around here, the whole thing can quickly sound terribly unmusical or end up as digital noise. A bit of discipline and at least a rudimentary basic understanding of FM synthesis and the linking of Operators is, therefore, a necessity if don’t want it to end up an experimental noise orgy. A bit of discipline and at least a rudimentary understanding of basic FM synthesis and the connection of Operators is a great advantage if you don‘t want it to end in an experimental noise orgy. Additionally, MEGAfm does not have the transparency of a Reface DX, but always adds a good bit of digital dirt. Crystal-clear pads and electric pianos or dust-dry flawless basses are hard to get with this little synth. But if you know the other products from Twisted Electrons, you know about their preference for instruments with the lo-fi charm of chip sounds, anyway. So MEGAfm sounds raw and rude from the speakers: powerful and with character and audible aliasing.

For the first time, MEGAfm (Checkout the product in the Thomann shop) offers direct access to all FM synthesis parameters, with a rich set of controls, inviting you to experiment. Based on old Yamaha chips, this 4OP synth sounds crunchy and vintage, but the sound palette goes far beyond the typical chip sounds and also provides all the classic FM sounds with a lot of lo-fi charm. The raw and punchy sounds, with loads of character, are an interesting