<< Back to overview
Groovebox galore

As an all-in-one system for step sequencing & beat programming, this groovebox wants to prove its qualities in composition and songwriting as well. Curious? It‘s not uncommon for a song idea or groove to pop into your head while you‘re on the road, but as soon as you‘re back in the studio, the idea is gone. A mobile production studio like Roland‘s new Verselab MV-1 standalone groovebox, which is based on the company‘s own ZEN Core sound engine, is very helpful in such cases. 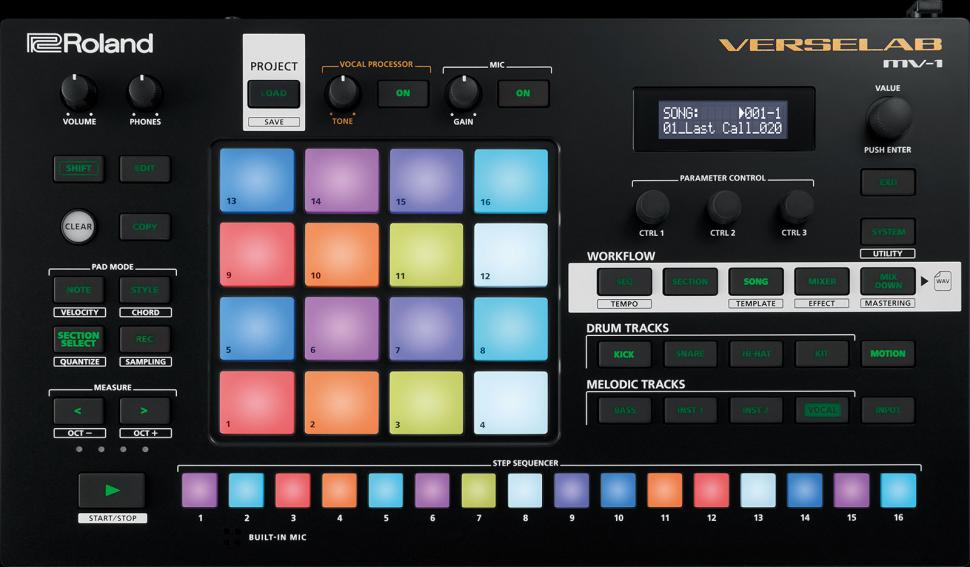 The connections on the Verselab MV-1 are comprised of two line inputs and outputs each, as well as an XLR microphone input on the back. The MIDI In/Out jacks and USB ports are also found here, as is an SD card slot. There is room for two headphones on the front panel.

The 16 velocity-sensitive pads are obligatory for a groovebox and can be used to quickly bang out drum ideas. Although the pads are smaller than on an MPC, they are well playable. According to the in-house TR classic, the 16 step-sequencer is located underneath, which can be expanded to up to 128 steps. To play the pads and steps, you can draw from a wealth of 3000 internal samples and 80 ready-made drum kits. Several demo songs can also be called up, which are stylistically located predominantly in Hip Hop, Trap, Reggaeton, RnB and Urban sounds. Qualitatively, the sounds that can be played with up to 128x polyphony sound good, especially the orchestral classical elements and guitars, although the drums often lack freshness. Thanks to the included SD memory card, you can also import your own external samples.

This compact rabauke offers a total of eight tracks, including four drum tracks: Kick, Snare, Hi-Hat and Kit. The rhythm structure is expanded by the bass and the instruments Inst1 and Inst2. The latter are given special attention, because these tracks are also designed as loop tracks in order to implement sophisticated time-stretching and pitch-shifting with them. A vocal track rounds off the range of tracks for recording your own raps.

Up to six minutes (stereo) can be recorded. An advantage is that up to 16 vocal takes can be saved before deciding on a final take. Verselab also includes various effects, both for the Auto Pitch, Harmonizer, Doubling and Enhancer vocal effects, as well as up to 90 multi-effects for the individual tracks. The mix can be finalized with the Compressor, EQ, Reverb, Delay and Chorus master effects.

The way of working on the device is well-structured, except for the display, which is too small, but you can achieve quick production results for making a song sketch.

Quickly program multiple sequences in Seq mode and generate multiple clips via Section mode. With the Style button activated, chords can be added. If you want, you can also create an arpeggio from your instrument samples. This way, you can quickly create an arrangement via the Song mode. Sampling is also easy, only the editing of the start and end points using the display is a bit cumbersome; an editor would have been desirable.

For quality reasons, however, it is more advisable to use the external microphone input than the internal microphone for vocal recordings. Detailed editing of samples and effects is done on the display menu, which can be quite tricky depending on the task. The effect quality is absolutely okay for a rough mix, but mastering should preferably be done on the computer. The song can then either be exported to an SD card via Mixdown to further process them on the computer as stems.

The Verselab MV-1 is a user-friendly compact studio that cleverly combines the advantages of a groovebox with a step-sequencer. A variety of sounds and effects, as well as the option of quickly building a song arrangement and export it as a rough mix to the memory card, should be of great interest - especially to Hip Hop and RnB producers - at a fair price / performance ratio.