<< Back to overview
Modular review

There are synths and modules with a very purist approach, and controls that all serve only one purpose each. And there are their counterparts, where each knob takes over various tasks. CVilization belongs to the second group and takes this principle to the extreme. Manufacturer u-he describes the module as a „Polymorphic CV & Audio Utility“, but it‘s hard to comprehensively explain in a nutshell what it can ultimately do. So we bring light into the darkness ... At its simplest function, CVilization serves as a 24 bit/96 kHz and +/-10 volt mixer with four inputs and outputs each for audio and CV signals. The inputs can be routed, mixed and multed to any output. Two additional inputs serve as gate, trigger or additional CV signals, depending on the application. But the heart of the module is all the applications in between. Because the signals can be put through the wringer, for example, via sample & hold or quantization - including user-defined scales. So, even an LFO suddenly becomes a supplier for hooks and harmonic sequences. 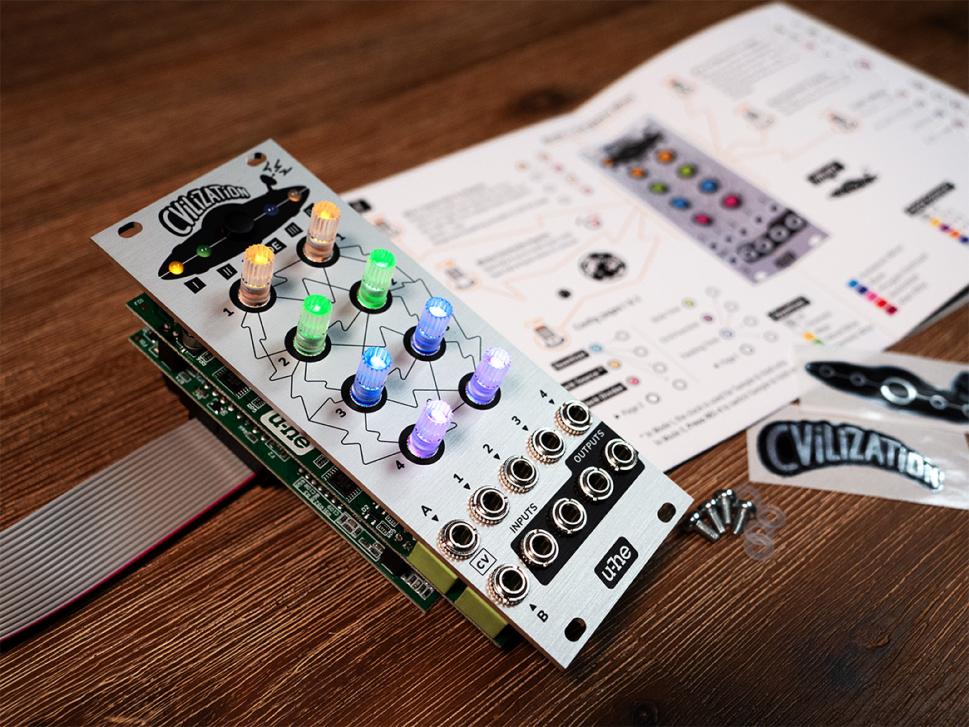 To facilitate the overview, CVilization is divided into four different operating modes: In Mode, 1 the module acts as a Mixer and Quantizer, in Mode 2 as a Switch with Sequencer, in Mode 3 as a so-called Mucorder, and Mode 4 is called Quadrophonic Panner. In addition to acting as a mixer, this module can also work as a Sample & Hold Generator in Mode 1, as well as quantizing incoming signals. Eight scales are included, including Major, Minor, Pentatonic, Phrygian and others, but user-defined scales can also be recorded. More on that in a moment. As mentioned at the beginning, this turns an LFO into a sequencer. Of course, this only gets really fun when several sources are fed in simultaneously and in order to influence each other. Mode 2 continues the principle even further, because here the module serves as a sequencer for the incoming signals. Four patterns, with up to eight steps each are offered, whereby each step either loops through one of the inputs or provides a constant CV voltage or a random value. Likewise, a step can also remain empty or pause the sequence. If an empty step is followed by only other empty steps, the pattern is automatically shorte

ned, so that each sequence can be between one and eight steps long. Since this principle works equally well for CV and audio, CVilization can serve not only as a four-step sequencer, but also as an original switch. In Mode 4, this module differentiates itself even more …

The third mode with the mysterious name „Quad Mucoder“ is also a step sequencer that records up to 16 steps on-the-fly. In other words, it creates classic step recording. The real feature is the Mutate function, which allows these patterns to be randomized in variable intensity and in real time. As with all other modes, this can also be quantized to scales. Mutations with subtle intensity, in particular, bring excitement to otherwise static sequences over a long period of time. If you like the mutation, just press a potentiometer and the current pattern is frozen and can also be saved. Furthermore, the CV values of different inputs can be mutated and even aligned with each other. For example, a static bassline can be adapted a bit more to a new hook with each pass. Or two fundamentally different melodies can be lifted into the same sound cosmos. Ingenious! Finally, the last mode turns the module into a Quadrophonic Panner that can distribute the signals of an input to the four outputs. Thanks to the built-in random generator, CVilization becomes an Autopanner in no time, provided an external mixer is available. Mode 4 can do much more, because panning is only its simplest option. CVilization can crossfade between the outputs, which can be modulated with any CV source, if necessary up to the audible audio range. For example, four different sources such as LFOs, envelopes and oscillators can be fed in, between which the module either changes smoothly or jumps back and forth randomly. The only limit here is your own imagination.

As different as the applications within CVilization may be, they all have one thing in common: quantization on the basis of scales, so that the results are as harmonious as possible and move within the same spectrum. The existing eight scales are a good basis for this, but there could be a few more. For this purpose, there is the option to record scales directly. Just connect a keyboard (or any other CV source) and play the desired notes. Octave and length don‘t matter, the module recognizes up to twelve notes per scale, which can then be stored in one of seven locations. Speaking of saving: Contrary to its simple exterior, CVilization is an extremely complex module whose settings require a certain amount of thought. It is all the more practical that seven locations for presets are available per mode. Thanks to the support of the Eurorack standard „Select Bus“, owners of modules like Malekko Varigate 8+, WMD Metron or ES Select Bus Breakout can store and manage another 128 presets. Speaking of Select Bus: Eurorack‘s own Bus Gate is also supported for using a potentially existing clock alternatively, also via the Select Bus, if you have compatible modules in the rack.

Such diversity needs coherent operation, especially in such a small space. Each mode offers three so-called pages: Performance, Program and Configuration. In the Mixer, for example, inputs and outputs can be activated or muted via the controls on the Performance page. The Program page controls volume and routing; so press the desired potentiometer on the left side - it will then start blinking - and then adjust the volume for the respective output with the four knobs on the right side. The brightness of the knob indicates the volume level. Pressing the flashing slider again takes you back to the performance page. This process, and the behavior of the sliders, is identical for all modes, which makes navigation much easier. It does take a little time, right at first, until you have memorized the way operation works; and here and there you can get lost in the options, but after a good hour or so you can navigate relatively easily through all the features. Nevertheless, regular practice is a must, otherwise a live performance will quickly degenerate into frustration. By the way, the manual and the official cheat sheet with the most important controller assignments, as well as the manufacturer‘s tutorial videos, are a great help here. Great praise for the loving and, above all, helpful work.

There‘s no mistaking it: CVilization is a real workhorse and anything but a self-runner. The operation is coherent and cleverly solved, the different colors of the sliders are a great help, but navigation needs to be memorized, and that requires practice. On the other hand, the module offers a lot of features in a small space and guarantees entertainment for a long time. Above all, it replaces a handful of other modules that would otherwise require high acquisition costs, while taking up very little space in the rack. Musically, it‘s a great bonus for any rack thanks to the unique Mutate function, especially when combined with quantization and scales. CVilization is certainly not the first choice for every modular user due to its complexity, but those looking for a musical Swiss Army knife for the rack will definitely get their money‘s worth. Congratulations on its very More Info successful debut!