After the successful launch of the Prime 2 and Prime 4 DJ controllers, Denon surprises us with Prime Go - a fully comprehensive 2-channel, battery-powered standalone solution. The most striking feature is the very compact design, which allows mobile DJs in par- ticular to complete a professional DJ gig in a backpack. 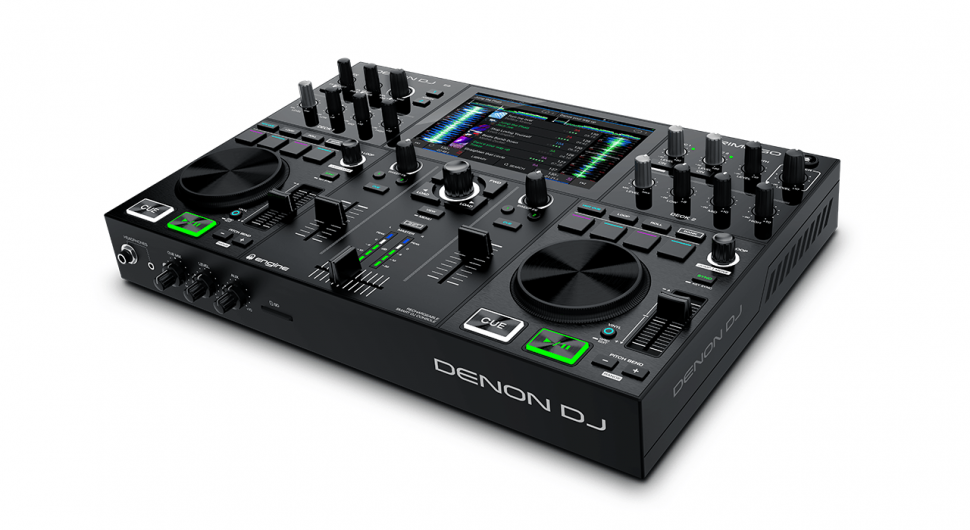 The back of the DJ workstation is equipped with two microphone inputs, so that the DJ and another person can be heard for the purposes of presentation. The connection for external players, such as CD players or smartphones via the aux input is praiseworthy. In addition to the XLR master output, there is also a jack booth output. Two headphone outputs have been provided on the front.

The high-contrast, high-resolution 7-inch color touch display, behind which the operating software Engine OS runs, is comparatively large. The user can easily scroll and navigate through song folders via gestures, and creating playlists and crates is also no problem. Previewing music before loading is realized via the track preview.

The decks and mixer section, on the other hand, are very compact. In order to fix the quantizable start positions of the songs, each deck has four rubberized non-slip performance pads as hot cues, which can also be used for loops and rolls. They feel very good, while the jog wheel underneath is very small due to the configuration. After some initial practice, however, it can be used to make adjustments just as precisely as the jog wheels of its big brothers. The pitch faders are also proportionally quite short, but work with pleasing precision. The fader resistance is comfortable without seeming too loose.

This also applies to the channel faders in the mixer unit, whose LED meter displays are definitely too short for reliable level indications. Two of 13 assignable effects can be activated above each of the volume faders, which provide creative mix intervention in addition to the Sweep FX filter control.

The arrangement of the 3-band equalizer, which includes the level control per channel, is a bit unusual, as they are placed next to the touch display above the respective decks instead of on the mixing console. But the equalizer sounds good and knows how to intervene properly in the frequency spectrum.

The music can be streamed via the SD card slot, the USB ports or via LAN / WLAN. In addition, you get a free three-month trial membership to the streaming service provider Tidal. It grants access to more than 60 million songs. The Beatport link opens the gates to nine million electronic music songs. Use of the SoundCloud Go+ streaming service is included. Audio files intheformatsAAC,AIF,FLAC,MP3,MP4, Ogg Vorbis, and WAV can be played.

In terms of workmanship and reliability, the Prime Go makes an excellent impression; however, one of the most impressive advantages of the DJ workstation is its portability. Thanks to the battery operation of almost four hours, DJ sessions can be spontaneously produced on the beach or during other outdoor activities. The jog wheels are stable and precise, and with a bit of practice, clean transitions are always possible despite their small size.

The thirteen effects (such as Filter, Reverb and Delay) can each be modified rudimentarily by various parameters, but are qualitatively successful throughout and stimulate the creative potential when DJing. After longer live operation, you realize that all important functions are on board that are necessary for a professional DJ mix, although at first glance it may seem to be rather reduced.

With its 2-channel DJ workstation Prime Go, Denon opens up a new market segment of battery-powered standalone controllers that is, so far, unique in its compactness and portability. The price/performance ratio of this device is really okay and in terms of quality, Prime Go is in no way inferior to larger controllers in terms of professionalism.