This topic is a perennial favorite: The hookline is in your head, but before all the right notes are found on the keyboard, it's long gone. If only you could just sing or hum a melody. You can guess what's coming next: Sure, you can! And not only notes, but also beats. While we're still working on much longed-for techniques like "Brain to MIDI", manufacturer Vochlea has already invented "Voice to MIDI". 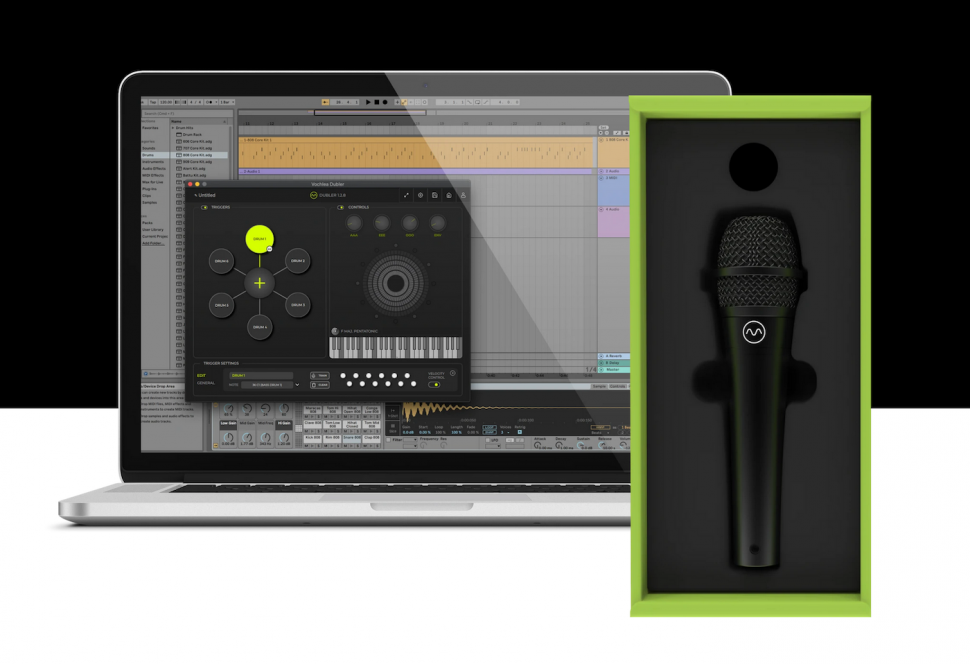 This topic is an evergreen: The hookline is in your head, but before you can find all the right notes on the keyboard, it‘s long gone. If only you could just sing or hum a melody. You can guess what‘s coming next: Sure, you can! And not only notes, but also beats.

While much longed-for technologies such as „Brain to MIDI“ are still being worked on, manufacturer Vochlea has already invented „Voice to MIDI“. The Dubler Studio Kit consists of a special USB microphone and a software package of the same name, which recognizes voice signals from the microphone and converts them into MIDI notes.

Installation is super simple: Either scan the QR code included in the package or go directly to the manufacturer‘s website, download Dubler software and open the app. On the one hand, this activates the virtual MIDI port, which can be used as an input in any DAW, and on the other hand, it acts as a converter from voice to MIDI notes. Two modes are available, „Triggers“ and „Controls“, which can also be used simultaneously.

The former converts up to eight percussive sounds into notes for drums. In order for the app to understand your sounds properly, they must first be trained. So, add a drum, press the „Train“ button and repeat until the desired sound is repe- ated several times. Then, select a MIDI note for the drum and, if necessary, activate „Velocity Control“ so that you can control the velocity of the MIDI note with the volume of your voice.

The „Controls“ mode, on the other hand, recognizes sung pitches in real time and outputs corresponding MIDI data; however, not only are the notes recognized, but so are the vowels A, E and O, as well as an envelope - all of which can be assigned as MIDI controllers to any parameters in the DAW, for example, to control filter movements, vibrato or effect components. The only limit here is your own imagination.

Singing the notes works surprisingly well and Dubler also quantizes the input to the nearest note if the pitch is not quite hit. Since a basic pitch can be defined and four scales can be added, inexperienced singers are also on the safe side. There is even a chord function available, but with only a single chord. The selection of scales should also be much more extensive; however, scales can be created themselves by simply activating allowed notes with a click. Alternatively, the desired notes for the scale can even be sung in. Practical! In order to also cover ranges between the notes, Dubler offers a pitch bend function, which detects fluctuations in the voice and sends them as pitch wheel data.

While both singing notes and controlling parameters via vowels is a lot of fun, beatboxing was only conditionally inspiring. Drums could certainly be controlled via various sounds, but not nearly as precisely as notes. A clear „Bamm“ or „Bomp“ for the kick is distinguished quite reliably from a „Tsssss“ or „Psssss“ for hi-hats, but the recognition got confused with less different sounds. In principle, the technique works quite well, but requires much more practice until the results fit.

The Dubler Studio Kit is a unique product with impressive technology and a great fun factor. Although the drums were not quite as easy to control via microphone, singing melodies works flawlessly and controlling filters or other para- meters via vocals is more than just a great bonus, both in the studio and on stage. And last but not least, thanks to chords, scales and quantization, Dubler is a true source of inspiration for any type and form of music. Top!