<< Back to overview
The drum expert

With a whopping 73 controls, this analog drum expander invites you to play around, and revised trigger inputs allow for dynamic integration.

The DRM1 analog drum synthesizer can quite rightly be called a classic, because the expander has now been on the market for 25 years. Although the external design and name have changed, the DRM1 was also offered by the German company Music and More (MAM) and Touched by Sound (TBS) and add to that Syncussion (not to be confused with the SY-1 Syncussion from Pearl). But not much has changed in the concept and structure of the sound generation; and Version 4, tested here, is also limited to detail improvements compared to its predecessors.

Why not, after all, the concept has proven itself over the decades. And analog drum synthesizers are still very popular with their lively sound and direct access to all parameters, but as ready-made complete solutions, mostly replicas of drum computer classics like TR-808 and TR-909 are currently available. Independent and flexible drum channels can currently be found mainly in the form of Eurorack modules from companies such as Erica Synths or MFB, but an 8-channel drum synthesizer is not quite as cheap as they are. 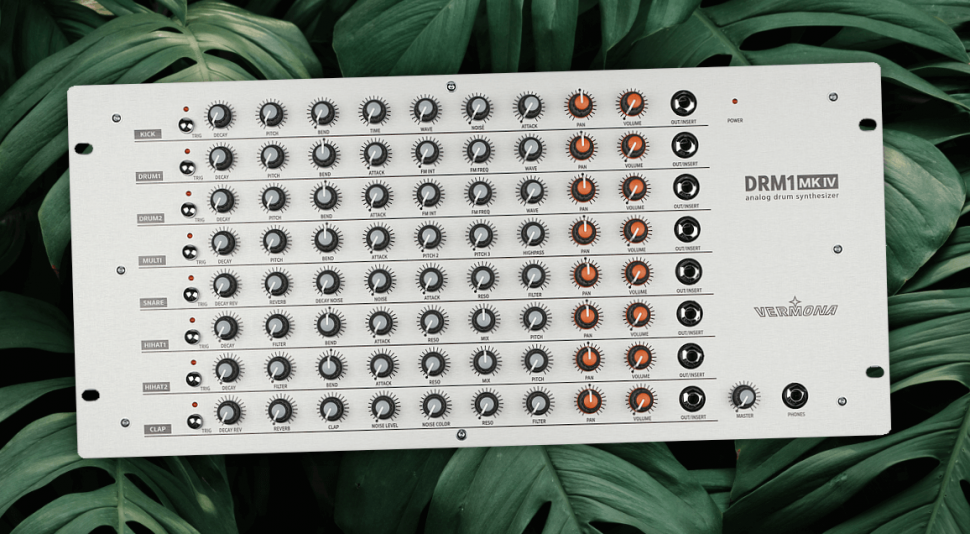 DRM1 offers eight individual channels, each with nine knobs for setting the appropriate sound. What you see is what you get: The audible sound corresponds exactly to the current knob settings, there are no memory locations. The individual channels are not identical, however, but are each optimized to produce a specific instrument. KICK covers a wide range of different bass drum sounds. DRUM 1 and DRUM 2 are designed for toms, bongos, metallic percussion sounds and the like. MULTI is well suited for cowbells, zaps and laser sounds, while SNARE is dedicated to all kinds of snares including rimshots.

HI HAT 1 and HI HAT 2 are responsible for the cymbals, each as an open and closed variant. Finally, CLAP is intended to provide the appropriate handclaps.

What you see is what you get: The audible sound corresponds exactly to the current controller settings, there are no memory locations.

A dream for tweakers

Externally, there is no relevant difference to its predecessor. The robust metal housing is still suitable for rack mounting, but DRM1 can also be used as a desktop unit. The hardware is designed for live use, the knobs are large and grippy and have sufficient distance between each other; therefore, even when wildly tweaking selected knobs, there is no danger of accidentally adjusting other sound parameters. Each channel has a silver trigger button so that the instrument can be heard even without external hardware connected. This is especially handy when programming sounds directly on the instrument.

Each channel also has an individual output in the form of a 6.3mm jack socket. These jacks have an insert function to, for example, loop a compressor or equalizer into the channel without an additional mixer. The main output is located on the rear panel. It is designed in stereo, as the position in the stereo panorama can be set individually for each channel. If a channel is picked up on the top side via a single output, it is conveniently taken directly out of the stereo sum.

Also on the back are the three MIDI jacks IN/OUT/THRU. The MIDI output is new in Version 4. There‘s also a USB port, which makes integration into a modern setup with computer or laptop much easier and saves an additional USB MIDI interface. Note number and MIDI channel can be freely selected for each channel. For dynamic playing of the sounds, DRM1 also processes velocity information.

MIDI output or USB MIDI are particularly interesting for the trigger variant of the DRM1. As with its predecessor, the DRM1 mkIV can also be equipped with trigger inputs whose functionality has been significantly expanded. The inputs still accept simple gate pulses to trigger the sound; however, you can now also trigger the sounds dynamically, with the trigger level determining the volume of the DRM1‘s sounds. This greatly expands the options when interacting with pads, a modular system, or an analog hardware sequencer. And it gets even better: DRM1 mkIV converts the analog signals into MIDI note messages, including velocity, and sends them out via USB or the newly added MIDI OUT. That way, you can play the analog sounds dynamically live, for example, via a drum pad, couple them with samples without any further effort, or record them in your DAW in the studio. The triggers can also be completely decoupled from the synth, allowing the DRM1 to be used as a pure CV-MIDI converter.

Fortunately, the power supply is still provided by an internal power supply unit, but it has been completely redesigned. It only needs a standard power cable and, therefore, works everywhere in the world without having to manually change the mains voltage. This will come in handy when live tours across countries and continents are possible again in the hopefully near future. The new power supply also works more efficiently and consumes less power, and thankfully there is finally a power switch.

Each channel has seven specific sound parameters in addition to level and pan and, as mentioned above, is optimized for emulating a specific drum instrument, but can, of course, be used for any other sound within its capabilities.

Kick is a special channel for generating bass drums. With Decay, you set the decay time; Pitch is responsible for the pitch. In the current model, the frequency range has been adjusted to 22 Hz to 380 Hz, which makes it easier to create suitable sounds. Even loooong 808 bass drums for Trap & more are no problem. The intensity of the pitchbend envelope and its decay time is controlled with BEND and TIME. If you like it a bit harder and more distorted, WAVE gives you access to a mix control that smoothly crossfades the oscillator‘s waveform from sine to square. This changes the sound from soft to hard. In the first half of the control travel, it becomes slightly roughened and sounds somewhat fuller. At higher values it becomes increasingly distorted, but in a pleasant analog way and not nasty-digital. In the new model, the sine sounds cleaner, while the square sounds more aggressive. This revision of the two extremes facilitates the use of the Waveshaper and expands the sound spectrum.

To emphasize the transients, ATTACK and NOISE can be used to blend clicks and noise into the oscillator signal, and the attack pulse has been revised in Version 4 to sound even more direct. 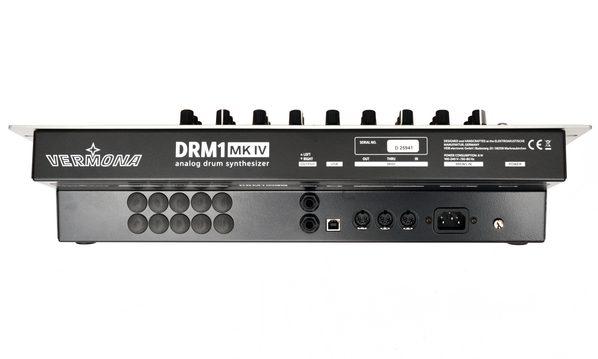 The connectors on the rear are recessed so that the plugs do not protrude and interfere with rack mounting.

The Drum 1+2 channels are identical on the outside. This makes sense, since they are well suited for analog toms, conga or bongo, which are often needed in two different tunings. Fittingly, different frequency ranges have been reserved for the channels for the first time in the new edition: DRUM 1 goes from 18 Hz to 300 Hz (FM oscillator: 1.25 Hz-550 Hz), DRUM 2 covers 24 Hz to 430 Hz (FM oscillator: 1.25 Hz-785 Hz). As with the kick, you can adjust the DECAY time and PITCH. Pitch modulation (pitch bending), so important for toms as well as Simmons-like sounds, can be done upwards or downwards, thus affecting the pitch either positively („piuuu“) or negatively („puiii“). ATTACK mixes in a percussive click to emphasize the attack phase. WAVE is the waveshaper also used in the kick drum. An internal LFO with frequencies up to the audio range modulates the pitch; with FM FREQ and FM INT, you adjust intensity and frequency. This also allows you to create atonal FM sounds like bells. The FM oscillator is synchronized with the trigger signal in the new version of the DRM1, which has the effect of a smoother attack, among other things.

The multi-channel gives access to three oscillators. The basic frequency is set via PITCH; the detuning of oscillators two and three with PITCH 2 and PITCH 3. ATTACK, DECAY, as well as up and down pitch bending, correspond to the other channels. At the end of the sound generation, there is a high pass filter for control over the lowest frequencies. Due to its structure, MULTI is primarily suitable for creating atonal, detuned percussion sounds like cowbells, but with long decay times you can also craft weird other sounds and even stabs or house chords.

For the snare channel, a sine wave oscillator generates a slightly longer tone for the „body“ of the sound. The signal travels through a filter equipped with frequency and resonance controls with a powerful 48 dB cut and a circuit optimized specifically for drum sounds, which can act similar to a compressor. The whole thing is combined with a noise oscillator featuring an adjustable decay time for the noise part. This makes it easy to quickly create a classic 808 snare. In addition, a lot of exciting and unusual creations are possible - especially in combination with the Reverb effect, which is based on an analog bucket brigade circuit and, therefore, has little to do with a realistic reverb simulation in terms of sound, but can provide a lot of retro feeling.

The Hi-Hat channel is also available twice. As a special feature, each Hi-Hat channel can be played via MIDI as a closed hi-hat or with a higher MIDI note as an open hi-hat, so you can have access to up to four hi-hat sounds in total!

Here, too, you‘ll find the already familiar parameters DECAY, up/down BEND, and ATTACK click. The decay times have been improved for a better differentiation between closed and open hi-hat, as well as the tone generator itself which, in Version 4, offers a more even level over the entire frequency range. The fundamental pitch is controlled with PITCH. A Filter with cutoff and resonance is used for coloring and the MIX parameter fades from rather noisy to tonal, allowing the recreation of all classic analog cymbal emulations.

Finally, the lowest channel offers the best conditions for all kinds of clap sounds. As with the snare, there is a NOISE generator, a resonant filter, and the analog REVERB and DECAY. They are joined by CLAP for the intensity of the clap pulse and a high-pass filter.

The clap sound is very convincing and can be very useful. It can sound decent as well as wide and hard without being a copy of drum machine classics.