<< Back to overview
Like the EDP model, Behringer combines digital LoFi oscillators with an analog multimode filter for a very special sound.

Between his replicas of legendary analog synthesizers and drum computers, Uli Behringer also likes to surprise us with an exotic model. Developed by the creative Chris Huggett (OSCar, Novation Peak and Summit, among others) in the late 1970s, WASP was hard to miss due to its bright yellow plastic housing of the cheapest design, and with a sound was just as toxic as the color. Behringer brought the WASP back to life in the Deluxe version, which was significantly improved on the hardware side in particular.

The obvious difference to the original is the missing keyboard. This allows Behringer‘s WASP Deluxe to be placed on the desktop or installed in a Euro rack to save space. With a width of 37.4 cm or 70 HP, WASP is one of the narrower Behringer synthesizers alongside Cat and Model D, so it can be installed in a relatively space-saving manner. The patch possibilities are limited, however; in addition to individual outputs for each of the two oscillators, there is also an input to send external audio through the filter of the WASP. A control via CV/Gate is sadly not planned. For the current price of less than 300 Euro, WASP is still an interesting option to add the extraordinary sounding digital oscillators and the very special multimode filter to a modular system. You just have to plan for a CV-MIDI converter. In our opinion, Behringer has wasted some potential here.

Due to the option for Eurorack installation, all inputs and outputs are accessible from the front. As with the Octave Cat, MIDI-IN and -THRU, as well as USB, are placed on the front panel. This makes it easier to update firmware when the unit is rack-mounted. MIDI is, unfortunately, limited to Note-On/- Off and pitchbend. On the rear panel, there are four DIP switches for setting the MIDI channel, two additional audio outputs (High/Low) in the form of 6.3mm jacks and the connector for the external power supply. 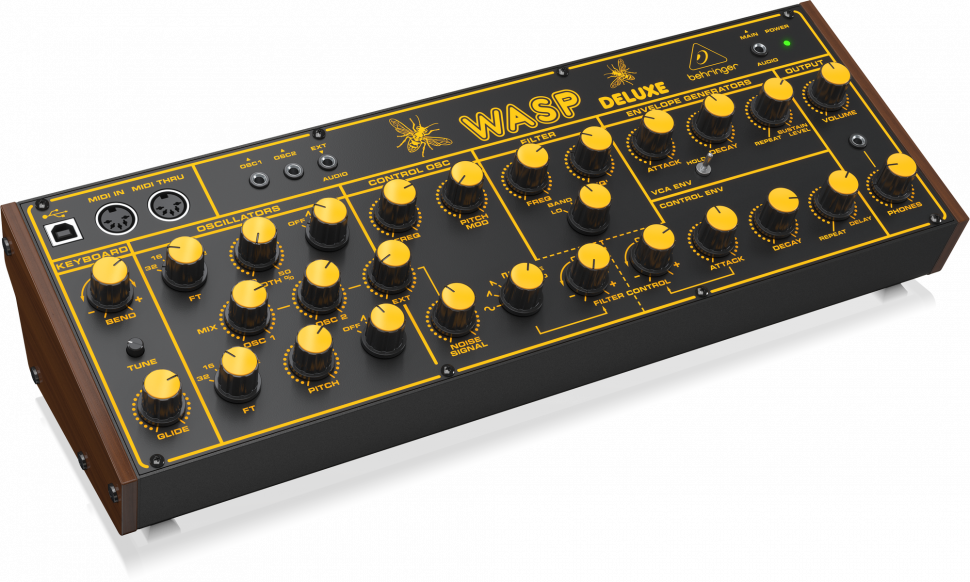 The sound generation of the Behringer replica is almost identical to the original. Two digital oscillators form the basis. This may be surprising at first, but it is a common thread running through the work of Chris Hugget. The OSCar, Peak and Summit also work with digital oscillators, but this does not affect their „analog“ sound. The new edition of the WASP does not use the same 3340/3320 chips as the other analog clones by Behringer, so the WASP Deluxe stands out more clearly from its siblings. The oscillators provide square and sawtooth waveforms, but the pulse width can, unfortunately, only be adjusted manually and cannot be modulated. That‘s why the WASP Deluxe has an Enhanced feature, where an LFO hidden under the hood and not directly accessible takes over PWM. Another LFO with 6 waveforms handles pitch and filter modulation.

Both oscillators can be mixed with a noise generator or an external audio signal before they reach the analog filter. And this multimode filter has it all: Similar to the Korg MS20, which was also developed with a focus on the lowest possible price, it can distort harmonically but can also scream really nastily. Together with the very special sounding oscillators (digital technology was still in its infancy at that time), this gives you a character sound that you either love or hate - but in any case you will always recognize it.

The two envelopes, on the other hand, seem almost unspectacular, even though they offer interesting options with hold, delay and, above all, the repeat function. Two additional controls allow you to adjust Bend and Glide for smooth pitch changes.

Even though Behringer deserves to be honored to reproduce a synthesizer as special as the WASP, the final product looks a bit half-baked. Although the clone reproduces the extraordinary sound of the original very well, an expansion of the sound generation, which was very limited at that time due to cost reasons, would have made the synthesizer much more interesting. At least CV/Gate control would have been obligatory here to integrate WASP Deluxe successfully into a modular system. If you don‘t necessarily need the special sound of faithfully recreated WASP, other Behringer synthesizers like K2, Cat or Pro-1 seem to be a better choice.