<< Back to overview
Review: Sequential Pro 3

A few years ago, Sequential released the extremely popular Pro 2; however, the somewhat quirky sound of the digital oscillators couldn‘t convince everyone. Additionally, an audio input and built-in multi-effects were on many users’ wish lists. That’s when Dave Smith stepped in and, after listening to users, drew on the full potential of modern technology and developed the Pro 3 (checkout Pro 3 in the Thomann shop). 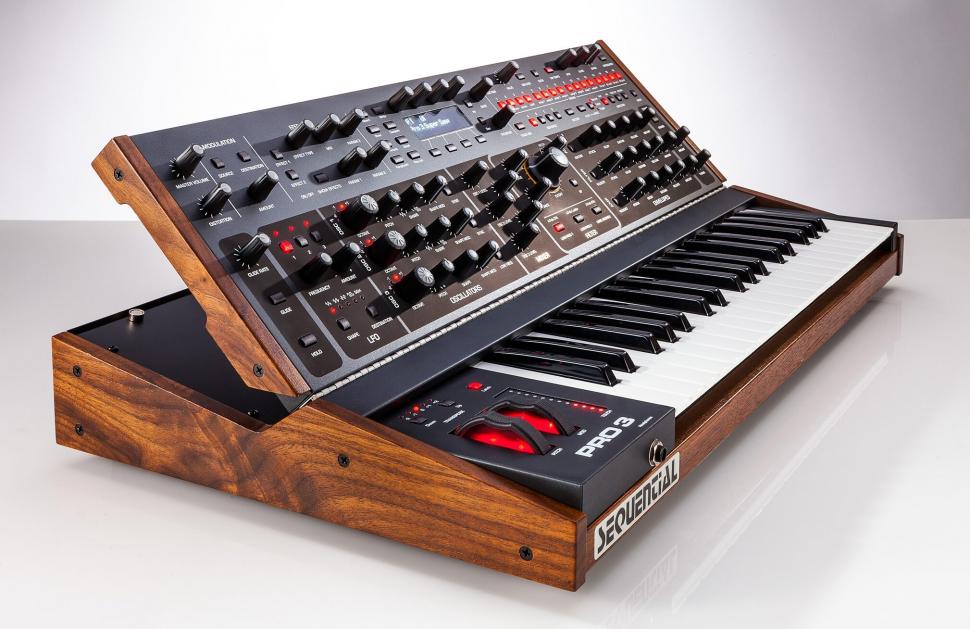 A few years ago, Sequential released the extremely popular Pro 2; however, the somewhat quirky sound of the digital oscillators couldn‘t convince everyone. Additionally, an audio input and built-in multi-effects were on many users’ wish lists. That’s when Dave Smith stepped in and, after listening to users, drew on the full potential of modern technology and developed the Pro 3. In addition to a digital wavetable oscillator, the Pro 3 also has two analog oscillators. The Pro 3 also has three filters. One filter is based on the Prophet-6 filter, and there are replicas of the Moog Ladder and the Oberheim OB-6 multimode filter. An audio input and a dual multi-effects processor round out the concept. The Pro 3 is also available in two different versions – the Standard version and the much more expensive Special Edition, with its wooden frame and foldable control panel brings back memories of the legendary Minimoog. 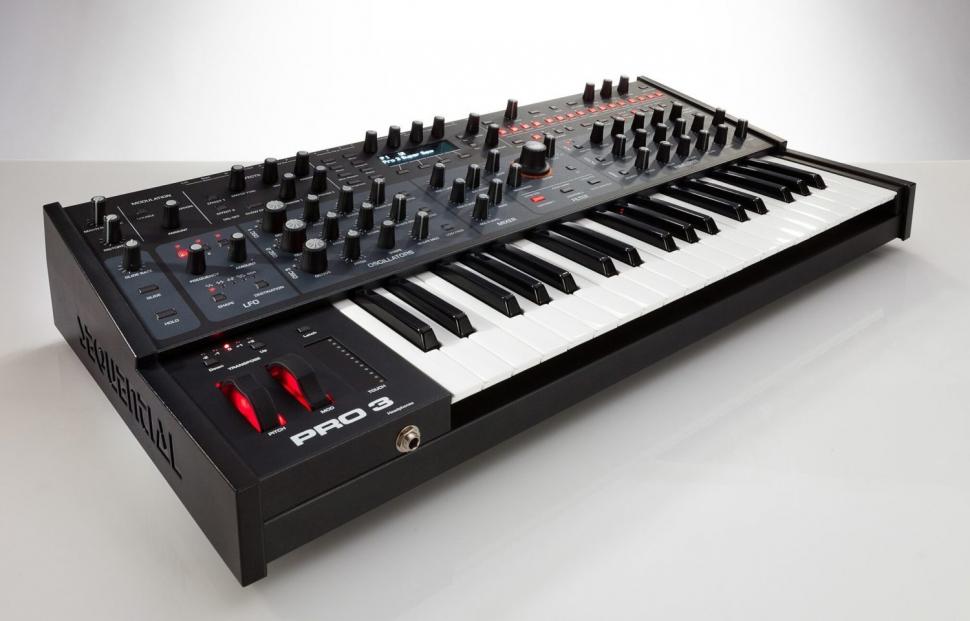 On the outside, the Pro 3 on test does not necessarily look like a monophonic analog synthesizer, but rather like a modern virtual-analog or digital synthesizer. The handy plastic potentiometers are inconspicuously designed and initially very stiff. If you remember from other Sequential synthesizers like the Prophet 6, it takes a few knob-turning sessions before the knobs smooth out and feel more pleasantly resistant. After early mixed experiments with endless controllers, Dave Smith opted mostly for classic potentiometers with clearly visible markings on the Pro 3. With 60 knobs and 70 mostly illuminated buttons, tactile sound generation is ensured. Access to more in-depth functions is provided by an easy-to-read OLED display with corresponding endless rotary controls.

The user interface is logically laid out and follows the typical structure of old analog classics. On the left is the modulation section with individually adjustable glide for each oscillator and the three identical LFOs. The LFOs offer standard waveforms, includes sample & hold for random value changes, have a slew function for smooth modulations, and can modulate various parameters. Assignment is done via the 32-slot modulation matrix, which gives you access to over 46 modulation sources and over 171 modulation destinations. In this respect, the Pro 3 is nothing like a modular system, especially since the matrix also supports modulations in the audio range like FM. As with other Dave Smith synthesizers, operation is very intuitive: source and destination can be selected directly by pressing the Source or Destination buttons and turning the desired knob (e.g. LFO1 Frequency and Cutoff ).

The other sections are arranged based on the signal flow from left to right. Three oscillators serve as sound generators. At first glance, this seems like a downsized version of the Pro 2, which offers four oscillators. The first two oscillators of the Pro 3 are analog and remind us of the Prophet synthesizers with waveforms that are continuously adjustable between triangle, sawtooth and square. Like the Prophet Rev2, not only can the pulse width of the square wave be modulated, but there is also a kind of PWM for the other two waveforms and their mixes. Hard sync on both oscillators can be activated separately, which provides interesting results…especially when playing in paraphonic mode, which you might remember from the Korg MonoPoly.

Like the Pro 2, Pro 3’s oscillators can be played separately in pitch, making chords possible; however, since they only go through one filter, it sounds a bit different than with classic polyphonic synthesizers. The advantage the Pro 3 has over other paraphonic synths is that the envelopes can be triggered individually for each oscillator, which makes polyphonic playing sound more natural. Additionally, the Pro 3 can create exciting chords and arpeggios with different waveforms and oscillator tunings. It can even modulate one oscillator with the other – a feat not possible on a polyphonic synthesizer. Too bad the Pro 3 does not have the same FM capabilities as the Pro 2 (which has four digital oscillators).

Things get really interesting when you add the third oscillator. This digital oscillator is based on the Pro 2’s oscillators and offers, in addition to the classic waveforms, a SuperSaw for fat trance leads and 32 wavetables with 16 continuously morphable waves in each. Now you can create clear, transparent and cutting sounds that complement the warm analog sound of the other two oscillators. Combined with the modulation matrix and the multi-track sequencer, this trio of oscillators allows you to create complex sounds that are not possible on any other monophonic synthesizer currently available.

Follower The next section in the signal flow is where you can blend the three oscillators together and add a noise generator and an external signal (which can be introduced via the the audio input (another feature that has been painfully absent on many other Dave Smith synths. This, in conjunction with the extensive CV/Gate options, allows you to integrate deeply with Eurorack oscillators, filters, or a complete modular system, further expanding your sound palette. An EnvelopeFollower completes the new input. If nothing is connected to the input jack, the EnvelopeFollower provides a feedback loop without having to sacrifice the headphone output like on the Minimoog.

As the Pro 3’s name suggests, there are three LFOs, three oscillators and three filters to choose from. The dual filter of the Pro 2 has, unfortunately, been omitted. On the Pro 3 (more information in the Thomann shop) the mixed signal always goes through only one filter, but the filter of the Pro 3 is much more flexible. In addition to the standard low pass filter with that unmistakable Prophet sound, there is a Moog-style ladder filter with those typical characteristics at higher resonance. We wanted to get those really fat and warm Moog sounds in the test, but the sound tended to be scratchy rather than noble, round and saturated. But this may also have something to do with the unique sound of the oscillators – a Prophet sounds different from a Moog. This makes the 12dB state-variable-filter (borrowed from the OB6) even more convincing. It can be swept continuously from lowpass, notch and highpass and can also be used as a bandpass filter. With this, you can make incredible Oberheim sounds and synthpop sequences reminiscent of old Vince Clarke records. The filter frequency can not only be adjusted with an extra large control knob, but with 1,024 steps, the resolution allows for soft filter sweeps without any audible stepping.

With these envelopes, they broke through the magic number, as there are four loopable ADSR envelopes that can be freely routed to various destinations via the matrix. VCA and filter are already pre-wired with one envelope each. In addition to the mixer’s gain staging, filter drive parameters and analog distortion as a global effect, Tuned Feedback is another option to add a touch of dirt and distortion to the sound. The output signal is sent back into the filter with a delay and the result can be tuned over several octaves. Grunge adds additional harsh distortion. Owners of a DSI Evolver will be familiar with all of this, the parameters and unique sound is very reminiscent of the circuitry used in the Evolver.

While the Pro 2 only had various delay effects, the Pro 3 has a multi-effect processor like other synths in the current Prophet product line, which works very well with the hybrid sound and adds analog flair – despite digital generation. Especially pleasing: The awesome sounding Super-Plate-Halley reverb effect from the Prophet X is also on board. All the effect parameters can all be modulated, which is especially exciting combined with the built-in sequencer.

The sequencer and sound in the Pro 2 were keys to its success. With the Pro 3, the range has been expanded even further. Instead of a maximum of 16 steps on 16 tracks, each sequence can now have up to 64 steps, even if all tracks are used. In addition, four different color-coded variations (e.g. for verse and chorus or short breaks) can be saved. A sequence can be played back with different sounds using the Seq Lock button. Various trigger options and playback directions, which can be changed directly during playback, increase its suitability for live performance. The first three tracks are for the pitch of the three oscillators; chords can also be entered in paraphonic mode. The other tracks are for modulating parameters. Programming your own sequences is just as intuitive as it is with the Pro 2 and pauses, slides and ratchets (fast repetitions) are easy to create with the multi-coloured buttons providing a clear overview. For parameter automation, simply press the record button and turn the appropriate knob (e.g. Cutoff ). An arpeggiator is also on board as an added performance tool.

Not only does the sequencer control internal sounds, but it can also send MIDI notes and MIDI CC messages. Even more interesting for owners of modular systems and other analog equipment is the ability to output control voltages and gate signals via the sequencer. For communication, the Pro 3 features MIDI IN/OUT1/OUT2-THRU as well as four CV outputs and a gate output. The synthesizer also has four CV inputs for external analog control. There are connectors for sustain and expression pedal, audio input, stereo output, and headphone output as well.

With Sequential Pro 3 (checkout in the Thomann shop), Dave Smith gives us probably the most versatile mono synthesizer of all time. The modulation matrix surpasses many a modular system in its capabilities, the flexible multi-track sequencer can control both internal and external sound generators, and the USB, MIDI and CV/gate features suggest the user of this compact synthesizer as the control center in the studio and on stage. The newly added analog oscillators and filter types, based on Moog and Oberheim synths, extend the sound spectrum in terms of classic synthesizer sounds. Combining the dual multi-effect processors and triple paraphony, you can also play chords and pads. The Pro 3 has, despite the features it borrows from the Pro 2, a very individual sound, that often reminds us of the Evolver from the same company and clearly stands apart from a Moog.