<< Back to overview
Mixer and audio recorder at the same time

The LiveTrak L-8 is not just a slimmed-down version of the LiveTrak L-12, because the compact mixer also offers a few advantages over the larger model, especially for podcasters. The first six channels, for a total of eight inputs, are monaural, each with a combination XLR/jack that lets you connect microphones or line-level devices. 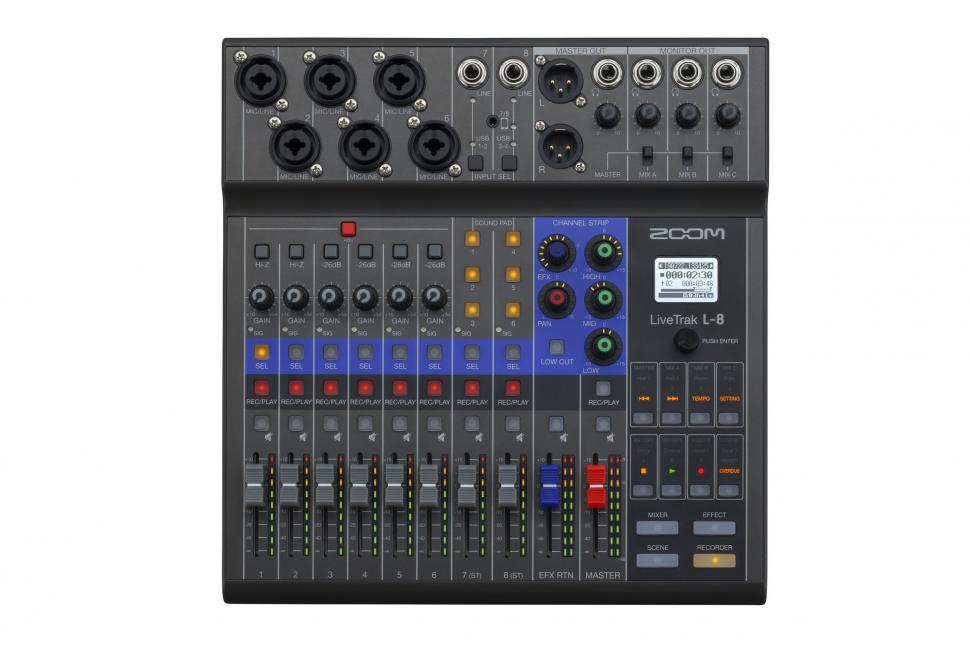 The LiveTrak L-8 is not just a slimmed-down version of the LiveTrak L-12, because the compact mixer also offers a few advantages over the larger model, especially for podcasters. The first six channels, for a total of eight inputs, are monaural, each with a combination XLR/jack that lets you connect microphones or line-level devices. 48V phantom power can only be activated for all inputs. Channels 1 and 2 have a Hi-Z switch, so they can also handle the high-impedance pickups of guitar and bass. Channels 3-6 have a pad switch to reduce loud input signals. Unfortunately, the integrated compressor, like on the L-12, has been omitted.

In addition, there are two stereo channels that can be fed with line-level signals via a 6.3mm jack or can control audio signals fed back via USB audio. A special feature of the L-8 is that the 6 built-in sound pads for jingles, intros, outros and sound effects can also be played via these channels. Also worth mentioning is the TRRS mini-jack for MP3 players or smartphones. This jack includes a mix-minus function, so that an interview partner on the smartphone does not have to listen to himself. This feature is very reminiscent of the RodeCaster Pro, which is specially designed for podcasts.

All 8 channels have illuminated buttons for muting and for activating recording/ playback, as well as a fader for the volume. For visual support, each channel has a level meter with 9 or 18 segments. The feel of the controls is okay considering the low price: Not particularly high-quality, but also not too smooth-running or cheap looking. The L-8‘s case is made of plastic, but makes a robust impression. The ability to operate on batteries is great plus, and can be via four AA batteries in the battery compartment on the bottom or via USB power bank.

Zoom has moved the channel strip with equalizer, panning and effects send to the right of the channels. Each channel, therefore, has a Select button. After pressing this button, the channel strip can be adjusted for the selected channel. LED rings around the endless encoder knobs indicate the current setting of the selected channel. Each channel has a 3-band EQ with fixed frequencies as well as a LowCut filter. The semi-parametric mids of the L-12 have been omitted. The Send knob sends the selected channel to the built-in effects unit, which provides 8 reverb and delay effects and is quite fine for use on stage and in the rehearsal room.

With balanced XLR outputs and an extensive monitor section, the LiveTrak L-8 (Get LiveTrak L-8 in the Thomann shop) is also well equipped for live performance. The mixer has four built-in headphone outputs, three of which can be fed with individual monitor mixes. In addition, almost all mixer settings can be saved in 7 scenes, between which you can quickly switch at the touch of a button.

With the LiveTrak L-8, you can also record up to 12 separate tracks. An SD card serves as memory for the mixer. Alternatively, a computer connected via USB can be used for recording and playback. The LiveTrak L-8 can even record to both the SD card and the computer at the same time. Multi-track recordings of podcasts, gigs, or band rehearsals are quick and easy.

Playback of up to 12 single tracks is possible from the SD card, but when using the 24-bit USB audio interface, only four separate playback channels can be used. However, playback on the device is currently only possible for your own direct recordings, so you cannot load the SD card on the computer with audio files and use the LiveTrak L-8 as an audio player.

The operation of the recording and playback function via the large display, push encoder and transport button is straightforward and easy to learn, which is hardly surprising given Zoom‘s many years of experience in the development of audio recorders. There is nothing to criticize in terms of sound quality either.

The combination of a digital mixing console and multi-track audio recorder is especially interesting for podcasters because of the mixer presets, sound pads and individual headphone outputs. That interest is further solidified with direct and uncomplicated operation. The additional features also make the LiveTrak L-8 (find LiveTrak L-8) in the Thomann online store) an affordable all-rounder for stage, rehearsal room and field recording.