<< Back to overview
Review: Elektron Model:Cycles

With Digitone, Electron has already shown how to make clunky and difficult to program FM synthesis more accessible. Model:Cycles takes this idea a step further. Like with Model:Samples, they paid special attention to easy operation by giving direct access to relevant parameters and functions. Model:Cycles (checkout Model:Cycles in the Thomann shop) is also more attractive in terms of price and currently costs less than a half of the desktop version of the Digitone. 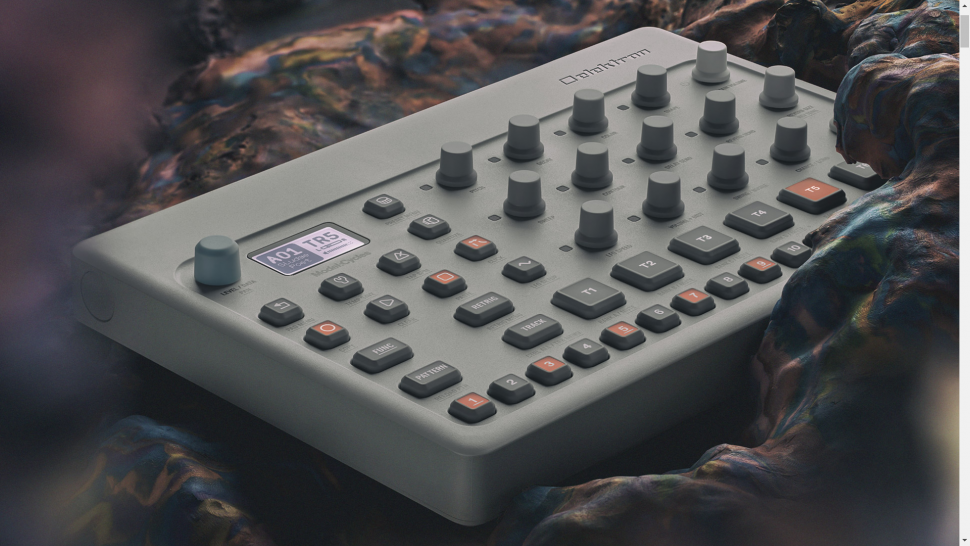 Savings were made primarily on the housing and operating elements. While more expensive electronic devices with metal housing and hard plastic buttons are designed for daily stage use and are almost indestructible, the Model:Cycles sits in the same clunky plastic housing as the Model:Samples, but this time with a grey colour scheme. It‘s not very sexy, so the included stickers for modifying it are of little help. And the orange backlit buttons are a bit wobbly. On the other hand, the low weight of well under one kilogram makes transport easier.

The six velocity-sensitive pads play quite well with firm resistance like on an MPC, high velocity values require a certain amount of force. The rubberized encoders, of which there are 16, are considerably more plentiful than Digitone and offer a pleasant feel. 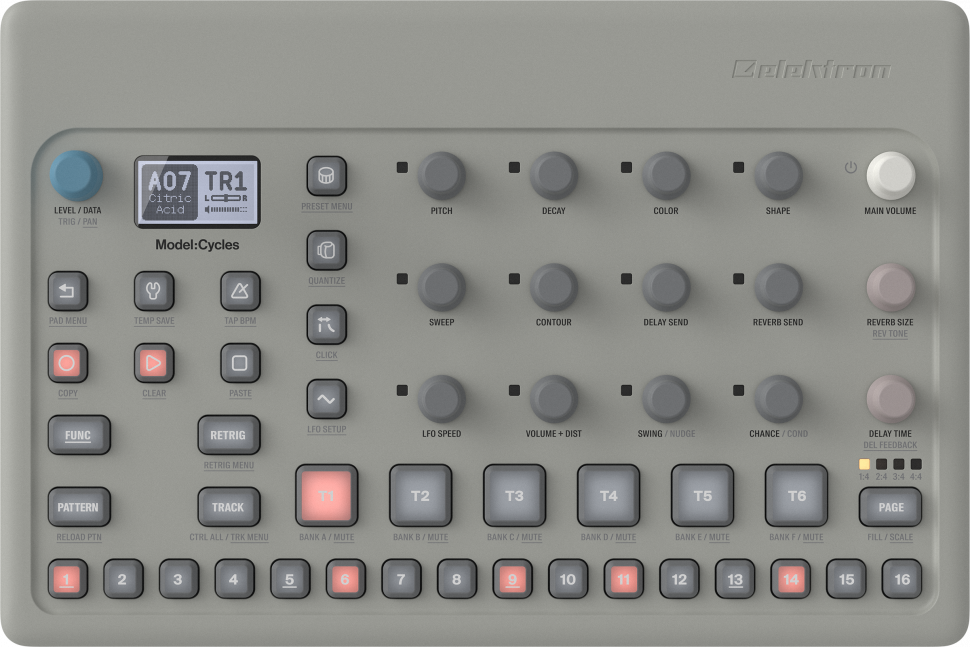 A stereo and a headphone output are available at the connections. Both MIDI and audio can be transmitted via the USB port, but only stereo and not as single tracks. Overbridge integration is reserved for their larger electronic devices. Model:Cycles does not require any special drivers and can also be connected to an iPad. Very practically, the audio output of a computer can also be played via the Model:Cycles output; the small box then serves as a 2/2 audio interface. Its 24bit/48 kHz resolution corresponds to the internal resolution of the FM synth. MIDI IN and OUT/THRU are available on mini jacks, but Elektron only provides a single adapter to DIN. The connectors can be switched between the two formats (A and B) or they can be detected automatically. Big praise for that! The power supply is provided by a wall wart power supply unit or a suitable battery pack; the USB port is not sufficient.

Unfortunately, the device does not stand as nonslip on the desktop as the electronic devices with metal cases, and the micro-USB connection tends to slip out a little. This is bearable in the home studio.

Elektron Model:Cycles (checkout in the Thomann shop) is a drum machine or groovebox with six instruments, all based on FM synthesis and each with its own sequencer track. Like Machinedrum and Analog Rytm, there are different algorithms (machines): Kick, Snare, Metal, Percussion, Tone and Chord are available for each of the six tracks, so you could also make grooves with two kicks and four percussion sounds if you wanted.

Each of the machines offers the six parameters Pitch, Decay, Color, Shape, Sweep and Contour, whose sonic effects differ significantly depending on the selected instrument. This is possible because each machine is based on different circuitry of the operators, which are present in varying numbers. In most cases, the Color knob is used to adjust the ratio of the pitches between the operators, while Shape determines the strength of the modulation or is used to select a suitable chord. Sweep, on the other hand, takes care of the progression of the pitch or controls the feedback, while Contour adjusts the modulation via envelope. 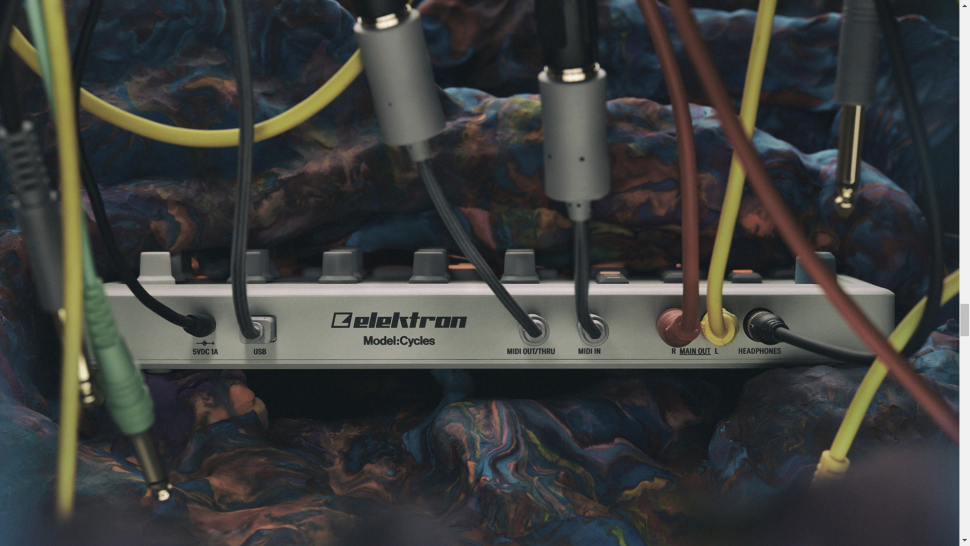 The sonic result is rich and fat and even ultra-deep kicks, toms and basses that can compete with any analog drum machine can be achieved. And very organic sounding percussion and, of course, all kinds of metallic sounds are built in no time. Elektron has done a very good job here and found a tuning that almost always leads to musically useful results - this is not necessarily a matter of course with FM synthesis. Only the snare machine was not quite convincing to us, but FM isn‘t necessarily suited for this either. A Clap Machine was also missing a little bit.

For basses, leads and arpeggios, the two-operator synth engine is suitable, while the four-voice polyphonic chord machine with wavetable option offers a choice of chords and provides matching harmonies and house chords. In addition, each instrument has a user-assignable LFO with seven waveforms that can be routed to 13 modulation destinations. Global effects include one delay and one reverb, with two controls for direct access to the size and tone of the reverb - as well as delay time and feedback. Each track has individually adjustable sends to feed the effects and a combined volume encoder that lets you add the excellent-sounding distortion to each track.

The top layer of Model:Cycles is called Project and contains 96 Patterns with six tracks and 70 Presets each. Up to 96 projects can be stored on the +Drive. Typically, each pattern is up to 64 steps long, with each track having a different length. This is also directly adjustable via the 16 step buttons and allows polyrhythms while the sequencer is running. Each track either controls an FM machine or outputs MIDI signals to trigger external hardware, but is limited to note, length and velocity. 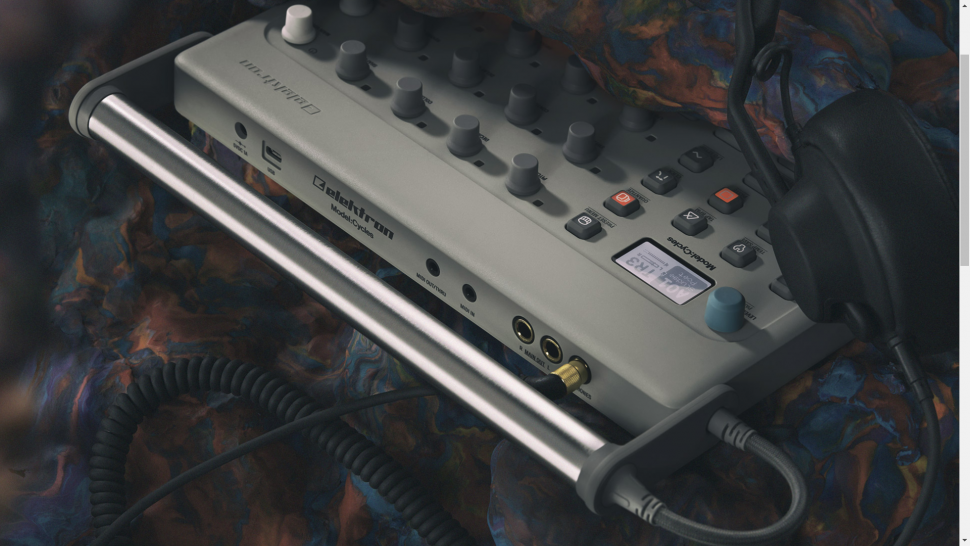 Sequences can be recorded in real time - even at different pitches - using the 16 step buttons. In grid mode, each step of the sequence can be edited extensively; the well-known parameter lock allows sound changes for each individual step. This makes Model:Cycles (for more informations go to the Thomann shop) especially exciting because, with FM synthesis, even small changes can have a big impact on the sound. Due to the high dynamic range, you just have to be careful not to distort the output in an unattractive digital way. The built-in compressor provides nice sound coloration, but does not function as a limiter. Even effect parameters can be „placed“ (e.g. a big reverb only on the last snare in the fourth bar). 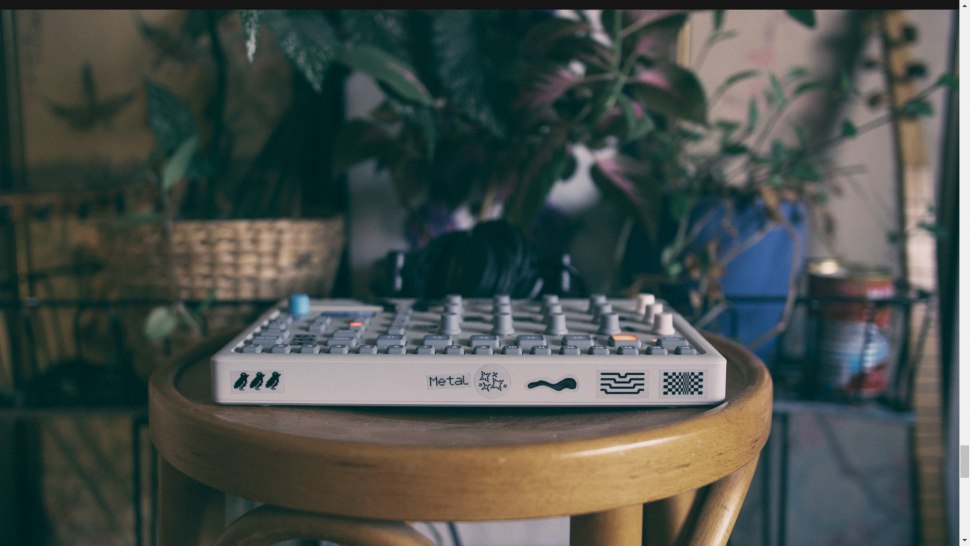 Preset Lock goes one step further allowing you to select a different preset for each step of a track, thus slightly removing the limitation of six tracks by combining multiple sounds on one track. Trigger-conditioning allows you to program additional steps, which, for example, only sound on every third pass of the pattern, or randomly with adjustable probability, or only during fills. Chance does this for all the steps together, so you can program ever-changing and varied grooves. A retrigger function is also on board, and the micro-timing of individual steps can be changed directly without menu diving in order to quickly set ghost notes or a preferred snare. This is where the many knobs come into their own; the operation is intuitive. We missed a song mode: the pattern chains that cannot be stored and are difficult to program are only a limited replacement.

Operation is carried out with the help of buttons, controllers and the LC display. The latter has 128x64 pixels and is quite small and not very readable, however, since the Model:Cycles is equipped with a relatively large number of controls for electronic conditions, all important functions and sound parameters are directly accessible. As such, the basic operation is very smooth after a short training period. The FUNC button has to be used in combination with other controls for special functions, which requires certain contortions and can reduce the fun of playing a little. And if you know the „big“ devices from Elektron, operation of the Model:Cycle is a piece of cake. Even those who have never touched an Elektron device because of its complex and yet very special handling and memory hierarchy, could have fun with Model:Cycles.

Model:Cycles (Buy now in the Thomann shop) persuades with four Elektron ratios of intuitive operation without much menu diving, from which even the complex sequencer benefits. Elektron has managed to make FM synthesis controllable resulting in rich, powerful and extraordinary drum sounds and even basses and chords. Model:Cycles already sounds surprisingly fat from the speakers without any further editing and doesn‘t have to hide from the analog and sample-based competition. The price of the hardware, which is not of the usual solid and valuable quality, has to be reduced. If you want better processing, integration via overbridge and including single tracks and real polyphony, you can switch to the Digitone, which is twice as expensive. If, however, you prefer direct access via many knobs and buttons and/or only have a limited budget, Model:Cycles is an exceptionally potent and independent drum computer at a fair price.