<< Back to overview
Arturia continues to expand its collection of effects plug-ins and the 3rd Series is dedicated to modulation effects.

We start with an emulation of an analog chorus called Dimension D. The obvious role model Roland Dimension D is a true effect classic. That‘s because this bucket brigade circuit-based chorus adds width, liveliness and warmth to the input signal without sounding too obtrusive or cluttering up the mix. It‘s one of those subtle effects that you don‘t consciously notice until you turn it off again, and the instrument or vocal is suddenly missing something important. Hardly any other chorus blends so beautifully with the audio signal. The original only needed a handful of buttons to switch between the different modes, and Arturia has kept this faithful to the original. The first three buttons offer different levels of intensity of the effect; when combined with Mode 4, the effect signal is amplified further in proportion. Theoretically, even more button combinations were possible with the hardware, but their sonic differences were limited and, therefore, not reproduced by Arturia. In typical Arturia fashion, however, there are some exciting extra functions to unfold. Various saturation modes provide for rather subtle sound adjustments. The selectable LFO waveforms, including Sample&Hold, expand the effect palette more clearly and can also provide powerful and tempo-synchronous modulations. Unfortunately, we didn‘t have a Roland Dimension D for direct comparison, but we were able to put the plug-in up against the Klark Teknik 3rd Dimension BBD-320, which, in turn, did well against the original in the comparison test. And Arturia‘s emulation really can hardly be distinguished from the analog hardware clone in a blind test. 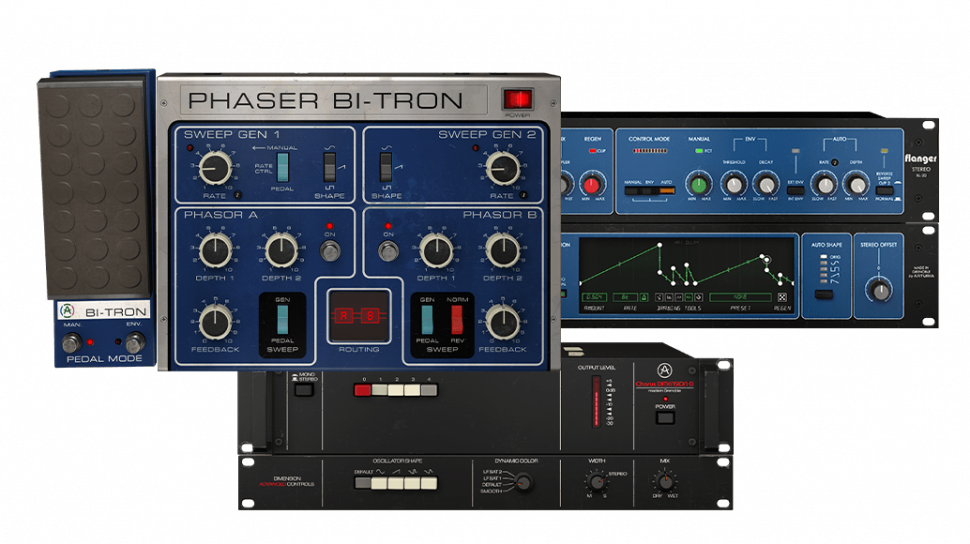 The inspiration for the Phaser should also be no stranger to many. Mu-Tron Bi-Phase is responsible, among other things, for many of the classic floating and spacey electronic sounds of Jean-Michel Jarre & more. Its special feature is the dual construction with two sweep generators that control Phaser A and B and can also be controlled via expression pedal, just like the original. Compared to the original, a ramp waveform for the two LFOs and separate controls for the modulation depth have been added. Under the hood, each sweep generator can be inverted, allowing for interesting stereo effects. In addition, the filters can work up to 12-pole for more powerful effects; the original only offers 6-pole filters. Envelope followers, as well as serial or parallel use, extend the effects spectrum. Bi-Tron impresses with a full and powerful basic sound; classic phaser effects are quickly created. But the additional functions also invite you to experiment, which can end in truly spectacular stereo effects or even wacky modulations.

Third in the bunch is the Flanger BL-20. Here, a somewhat lesser-known piece of hardware served as inspiration - the B.E.L BF-20. This plug-in is also dual for stereo effects, with two delay lines creating the familiar flanger sound. Three control modes are available: Manual, Env and Auto, each with associated controls. The modes can also be combined, if required. Feedback and Reverse options on one channel are used to adjust the effect. There are also some exciting new features compared to the original effect. Zero Crossing allows for deeper flanging effects, the stereo width is infinitely adjustable, and the Auto mode has been expanded to include more waveforms, as well as a tempo sync. But the highlight is the fold-out Function Generator. Here, you can freely draw in a modulation curve, which then influences the manual mode synchronously to the song tempo or free-running.

Arturia continues the positive trend that has already become apparent with the latest effect bundles and the new V-Collection. The emulation of analog circuits by the French is getting better and better. These three modulation effects consistently impress with very good sound, which is not far away from the originals and can definitely keep up with the best in the software field like UAD. In addition, there are sophisticated features with useful additional functions that do not overload the plug-in. The clear operating concept of the originals is retained, but the sonic possibilities are significantly expanded. This justifies the not entirely affordable price of 99 Euro per plug-in or 199 Euro for the bundle.

Edit and restore vocals in Dolby Atmos with Acon Digital

Acoustica is an audio editor specialized in post-production and restoration, modernized to version 7.4 in both the slimmed-down Standard and Premium versions. Acoustica can also be used for podcasting...
Read full article

Three vocal characters in the channel strip from IK Multimed...

Renowned producer Joe Chiccarelli, who has created the perfect vocal sound for U2, Alanis Morisette, The White Stripes and Morrisey, among others, has released the T-RackS Joe Chiccarelli Vocal Strip ...
Read full article