<< Back to overview
New effect plug-ins

Equalizers are a common species and what they do is relatively clear. Or? At least in broad terms, but there are always specialists that offer either exceptional features or special sound. Or both ... 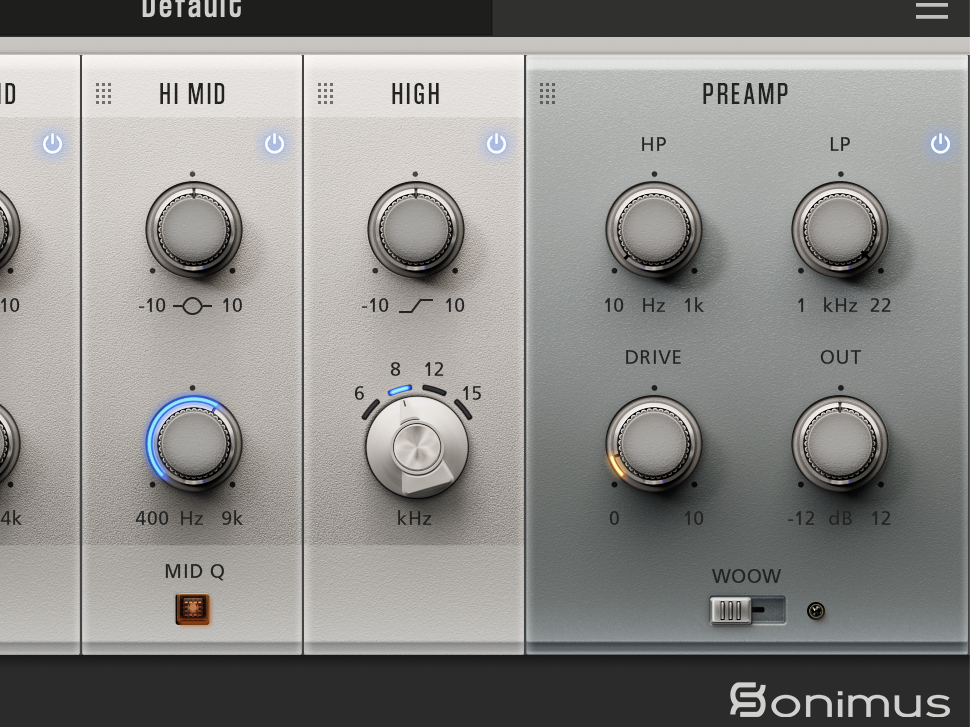 With the SonEQ Free, manufacturer Sonimus was able to collect many fans a long time ago. No wonder, the free effect offers an emulation of the legendary EQP-1A complete with the Pultec trick and extra drive function. Soundwise, it‘s first class. The SonEQ 2 now combines its features with a modular concept. The five components Low, Low Mid, Hi Mid, High and Preamp are offered, of which up to 16 can be combined in any order. So, if a single bass boost isn‘t enough, you can simply add a second low module to boost it again. Or boost first, then distort via preamp and tame again afterwards? Or connect 16 preamps in series ... The plug-in makes no specifications here and merely sets a limit with the 16 maximum possible modules. In contrast to parametric EQs, the effects are more musical than drastic, which makes the modular design all the more welcome.

The equalizer in detail

As mentioned, the Low module was modeled after the EQP-1A and, therefore, offers the ability to boost and cut the frequency ranges by 20, 30, 60, and 100 Hz, or both at the same time, resulting in the famous overlap effect that can be used to make many sounds crisper. In addition to frequency selection, the two modules, Low Mid and Hi Mid, offer a switch called HI Q and MID Q, respectively, which the manual says are „intended for clinical interventions.“ From a purely technical point of view, this narrows the frequency band, allowing more specific areas to be edited. The sonic effect is usually a soft, but also powerful sound, roughly comparable to the typical result of tubes. By the way, we have a few audio demos ready for you in the magazine downloads!

In addition to the crisp high-pass and low-pass filters, the preamp offers a saturation stage that intervenes relatively gently for a module of its kind. For more drastic results, a series connection of several preamps with the drive turned up provides that bit more. Behind the mysterious WOOW switch is, according to the manufacturer, a subtle boost of spatiality and stereo width, which we could not really audibly comprehend. Also, when checking entire mixes with and without the WOOW effect, no visual changes could be detected in the phase and correlation tools. The choice of oversampling, however, does make a difference. Two-, four-, eightand even 16-times oversampling at 705.6 kHz is possible, which draws a lot of computing power depending on the number of modules. Our halfway current quad-core Mac was at about 50% load with two EQs and maximum oversampling, with double oversampling again at 10%. It should be noted here that even the minimum rate serves up extremely fine sound, so that higher settings should really only be noticeable in the high-end range.

Do I Need This?

Vintage gear replicas usually capture a very special sound that is meant to make productions and recordings sound more analog. The applications for this are mainly on instruments in the traditional range and, of course, vocals because of the usually subtle effect. Applied to synthesizers, the effect is somewhat too subtle; on basses and drum loops, on the other hand, it makes more sense. With its modular design, the SonEQ 2 even scores in the electronic field, because once you start combining the available modules, even synth sounds can be warped properly. And this can range from subtle to drastic, whereby, the EQ always remains transparent and the results only sound unpleasant when used really extremely.

It‘s hard to put it any other way: SonEQ 2 is a hammer. Sonically it ranks on an extremely high level and the modular structure offers even demanding sound designers a lot of musical leeway. And it‘s just a lot of fun to combine the modules, simply reverse the order and be surprised by the result. Fat thing!