<< Back to overview
The qualitative upper class?

In addition to the two analog classics OB-Xa (review in BEAT 08-2020) and Juno-6, Arturia‘s V Collection 8 features another sampler in the form of the E-mu Emulator II, as well as a 16-channel vocoder with exciting extras as a useful addition to the collection. The Jupiter-8 replica has been sonically improved and, across the board, there are now four freely assignable macro controls for quick access to the most important sound parameters as well as integrated tutorials. 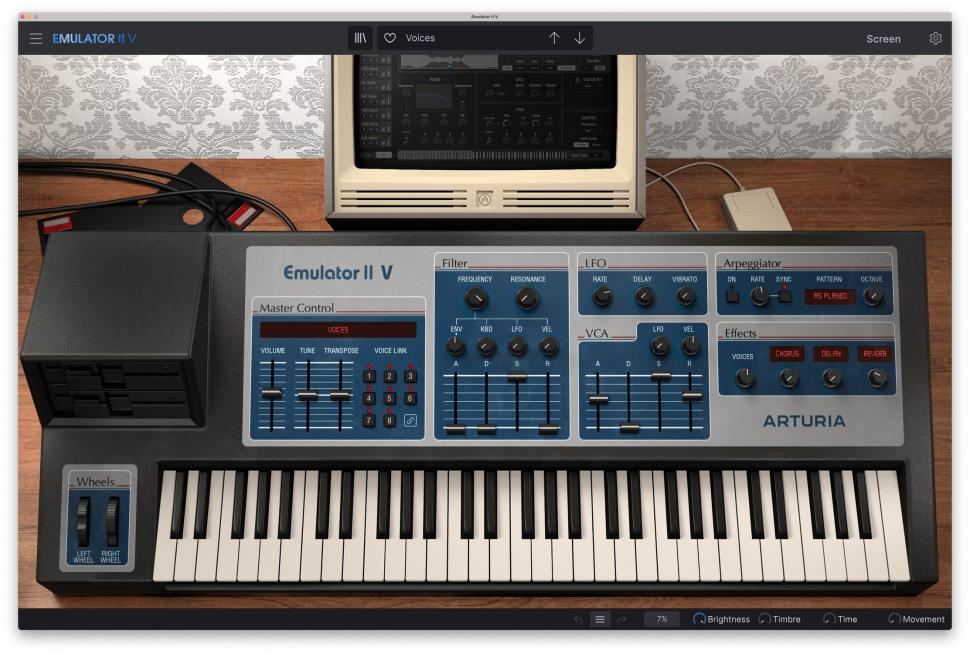 The Jun-6 V is based on the Roland Juno-6 from 1982. The original enjoys great popularity because the sound genera- tion can reproduce many classic analog sounds in impressive quality despite the simple design and is, therefore, suitable for both beginners and professionals. Arturia has done it right and left the proven concept almost unchanged. More voices, another envelope and LFO, as well as delay, sensibly expand the sound spectrum without making the synthesizer confusing. JUN-6V also impresses sonically; in this respect, Arturia‘s TAE True Analog Emulation has made considerable progress. This can also be heard in the revised Jupiter8 clone Jup-8 V4, which sounds much more convincing than the previous version, especially in such sensitive areas as crossmodulation. We even liked Jun-6V a tad better than the previous top dog TAL U-NO LX, which was already extremely close to the original in a direct comparison.

For fans of 80s Synthpop, the Emulator II needs little introduction. Depeche Mode, in particular, explored the possibilities of this sampling keyboard extensively during their Berlin phase in the mid-80s. After CMI-V and Synclavier-V, Arturia presents us the third cult sampler in its collection, which was unaffordable for mere mortals at the time. Here, too, sensible enhancements were made under the photo-realistic surface. More controls for direct access, as well as extensive sampling options after clicking on the Apple monitor, offer plenty of creative possibilities. But it‘s also fun to just play the integrated factory samples of the original, because you‘ll encounter many familiar sounds - like the infamous shakuhachi from Peter Gabriel‘s Sledgehammer and various Enigma hits. You can also load your own samples, as well as other original sounds, in EII format. Sonically, the whole thing has the same retro charm as the CMI-V, but impresses with easier operation and is, therefore, a useful addition to the V-Collection.

The Vocoder-V is based on the Moog Vocoder from 1979, whose current reissue (at a new price of over 6,000 Euro) is probably a viable alternative for very few people. As a special feature, the 16-channel vocoder offers the option of freely linking the frequencies of the analysis and synthesis bands. In conjunction with the individual volume faders for each channel, this allows modulations that are not possible with other vocoders. The result can also be frozen and then played via the keyboard.

Unlike the original, the Vocoder-V has a built-in carrier in the form of a simple but adequate synthesizer with two oscillators, including chord mode and ensemble effect. Unfortunately, there is no option to use an external carrier and thus, for example, combine your voice with an analog pad or a string sample, or to experiment with completely different sound sources. On the modulator side, Vocoder-V is more flexible. If your DAW allows routing into an instrument plug-in (there is no pure effect variant of Vocoder-V), you can loop in any audio signal like voice or drum loop.

Useful functions like compressor and EQ have been integrated, as have envelope follower and pitch tracking, to make the built-in synthesizer sing. Alternatively, you can use the sample player and drag any samples onto 12 slots, which are then fired off via the keyboard. This way you can, for example, „power up“ individual passages of a vocal line or create fancy science fiction FX.

The step to V8 is more than justified. The analog emulations have reached a new level of quality with the Jun-6 V and the Jup-8 V4 and have, therefore, arrived in the upper class. Also the operation, which was always impressive anyway, has been further improved. With the Emulator II you get a sampler with cult sound and accessible interface. The highlight in our view is the Vocoder-V, which is impressive with a very good basic sound and offers independent creative possibilities that set it apart from the competition.

The perfect groove on 16 pads with ADSR sounds?

So far, ADSR Sounds has made a name for itself with high-quality tutorials and attractive sales. Now follows with ADSR Drum Machine an own drum sampler, which has 16 pads on which samples can be loade...
Read full article